Bengaluru, Jan 25: To address the grievances of the Industrialists, over the issue of acquisition of land, the state government have plans to dilute the Land Reforms Act, Chief Minister B S Yediyurappa, said here on Saturday. 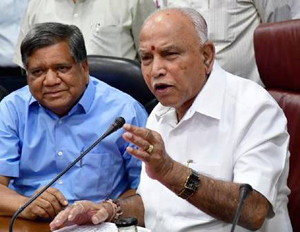 Speaking to the media here, on his visit to the World Economic Forum, Davos, recently he said that 'the visit was fruitful and ends with satisfactory note by procuring promises from several Industrial houses to investment in Karnataka'.

Stating that during his five-day stay at Davos, he had met several Industries heads on the sidelines of the summit, and had an interactive meeting with them, Chief Minister said that 'the event had helped us to present our state Karnataka, to convince them about the prevailing industry-friendly environment'.

'The interaction with the corporate heads was encouraging and more investment is expected to flow into Karnataka, in the fields of Mining, Power, Agriculture, Pharma, Education, and Industries.'

Informing that the main grouse expressed by the Industrialists about the bottlenecks being faced in the Land Reforms Act to procure land, he said that 'To make ease of conversion of Agricultural land we have plans to bring amendment and it would be both win-win situation to both Farmers as well as Industries.'

'We have promised them to remove all hurdles, which comes in the way of acquiring land to set up industries, and we have promised to rectify all the administrative problems within a month or two and legal problems in the next couple of months by amending existing laws.'

'We have also plans to present a new Industrial policy in the coming budget and roll out a comprehensive and investor-friendly law', he further said.

Replying to questions, Chief Minister said that 'all those investment proposals which got clearance at the High-Level Clearance Committee would automatically considered as ‘deemed permission’ and start the process of acquisition of land'.

'TheWorldEconomic Forum Summit had also served us as a platform to invite Industrialists to take part in the Karnataka Global Investors Meet scheduled to be held in November this year', he added.