Hassan, Feb 19: A 19-year-old boy, in a bid to impress his girlfriend, stole a sports bike from an OLX seller but cops managed to reach him through her on Tuesday. 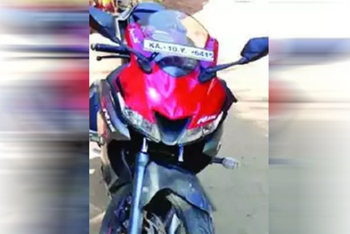 The accused, Pramod, who works at a bakery, had been involved in a bike-lifting case two years ago too.

On February 9, Pramod saw an advertisement on online marketing platform OLX from Puneeth, a farmer from Shravanabelagola town, who wanted to sell his sports bike for Rs 1.4 lakh. Pramod called him up and the two agreed to meet around 6pm that evening at Shravanabelagola town bus stand.

Once there, Pramod, a college dropout, assured Puneeth that he would buy the bike but wanted to take it for a test drive. The seller agreed. A few minutes passed and when there was no sign of the bike or Pramod, Puneeth tried calling him. The phone was switched off and could not be contacted since. Puneeth immediately filed a cheating case with the Shravanabelagola police.

SP R Srinivas Gowda and ASP BN Nandini put together a team and began tracing Pramod's call detail records. Maximum calls were made to a single number and it turned out to be his girlfriend's.

Cops called the girlfriend and on Tuesday, asked her to contact him and ascertain his location. They traced him near Hassan city's railway station and nabbed him along with the bike. On interrogation, Pramod confessed that he wanted to impress his girlfriend and take her on long drives on the sports bike.

Police said Pramod, who belongs to Bandithimmanahalli village of Alur taluk, dropped out of college two years ago and has been working at a bakery in Sahyadri Circle.

While working, he has been involved in several incidents of bike-lifting. Cops said he appeared to have strained relations with his family and had taken to crime to make a quick buck.