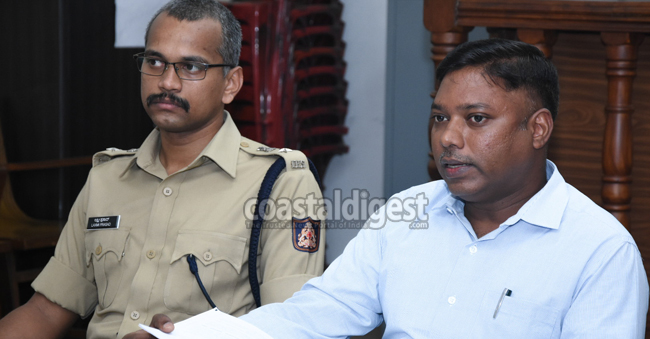 Mangaluru, Apr 16: Security has been beefed up ahead of April 18 Lok Sabha polls across Dakshina Kannada even as Deputy Commissioner Sasikanth Senthil today clamped the prohibitory orders under section 144 from 6 p.m. on April 16 to 6 p.m. on April 19. Meanwhile, the district administration also has declared dry days from April 16 to the midnight of April 18.

Mr Senthil told media persons that the administration has made special arrangement for the mustering day. “We will provide basic medical kit to polling personnel. There are 641 sensitive booths. Live streaming will be done to keep an eye on the process of election. There will 95 hand held cameras, 300 micro observers and six central paramilitary forces will be deployed at sensitive booths,” he said.

There are 8,45,308 male, 8,79,050 female and 102 other voters in the district with 1,861 polling stations. The candidates can arrange one table and two chairs for the use of their agents and workers for the distribution of unofficial identity slips to voters beyond the distance of 200 meters from the polling stations. There will be no scope for transportation of voters which will be an offence. Only Election Commission transportation vehicle will be permitted, the DC said.

Mangaluru police gear up for polls

Mangaluru City Police Commissioner Sandeep Patil said that there are 883 polling booths within the city commissionerate limits, of which 220 are critical. Three City Armed Reserve platoons have been deployed in each of the four assembly constituencies that come under Mangaluru city police. Similarly, eight KSRP platoons have also been deployed.

The city has 220 vulnerable polling booths in 93 areas, from where police have identified 501 persons as intimidators and appropriate action has been taken against them. Out of the 220 vulnerable and critical booths at 156 polling booths, the Central Armed Police Forces will provide security. At the rest of the critical booths, micro observers and video observers have been deployed.

On the polling day, two DCPs, seven ACP/DySP, 16 police inspectors, 37 Police Sub Inspectors, 79 ASIs along with 1,500 staff including home guards and head constables will be part of the bandobast in addition to two companies of central forces, 8 KSRP and 12 CAR platoons.

About 430 rowdy elements have been identified and preventive cases have been booked under CRPC section 107, 109, 110 to prevent any untoward incident. Externment orders have been passed against 17 rowdies under Mangaluru city police limits. About 21 checkposts have been set up at the inter- state borders of which 10 are static surveillance team checkposts and 11 are police checkposts. So far about Rs 28.25 lakh cash has been seized and after scanning through documents, cases have been disposed.

Three cases have been booked under the Representation of People's Act - carrying flags and pamphlets of a political party at Mangaluru East police station, a case related to carrying posters towards Kerala and a case of a person being impersonated on FB.

So far about 1,949 weapons have been deposited out of the 2,011 weapons licensed in the Mangaluru city police limits.