Veteran actress Padmadevi, who acted in first Kannada talkie film in 1934, dies at 95 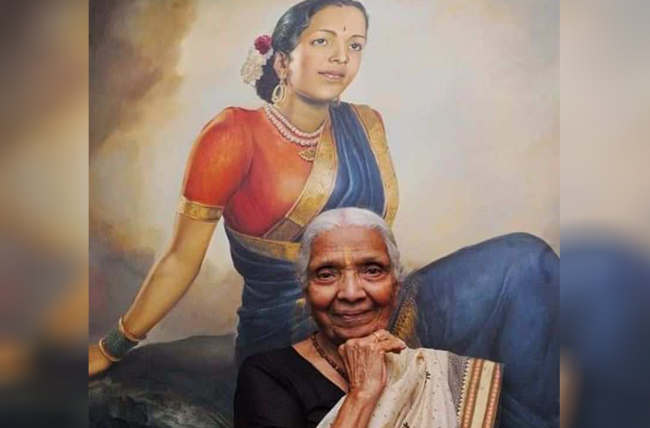 Bengaluru, Sept 19: Veteran Kannada actress SK Padmadevi, who had the distinction of having acted in the first ever talkie Kannada cinema, Bhakta Dhruva, in 1934, passed away due to cardiac arrest here on Thursday. She was 95.

Family sources said Padmadevi shot to fame in her memorable acting in the movie, 'Samsara Nauke', in which she had also sung four songs, which was released in 1936.

The veteran actress was born to S Krishna Iyengar and Seethamma in 1924. Due to her father's encouragement, she developed interest in acting despite opposition from her mother, who was an exponent in the instruments like veena, violin and harmonium.

Her journey in acting kick-started in theatre when she played the role of Bhoodevi in Bhaktha Prahalada. She also contributed to the play by singing four songs. Later, she went on to work with notable stars of theatre of her times like M Subba Rao, BS Raja Iyengar, MN Gangadhara Rao among many others.

The veteran actress entered film industry with Bhaktha Dhruva at the age of 11. This movie hit the floors much earlier than Sati Sulochana, which is credited as the first talkie in Sandalwood, but released later.

She played the female lead in Samsara Nouka and was part of the films like Vasantasena, Jaatakaphala, Bhakta Sudhama, etc. She had also worked in Tamil and Telugu movies.

Her husband Padmanabha Rao was a theatre artist. SK Padmadevi remained active in theatre till 1960 and was associated with All India Radio for two decades.

Veteran actress Padmadevi, who acted in first Kannada talkie film in 1934, dies at 95