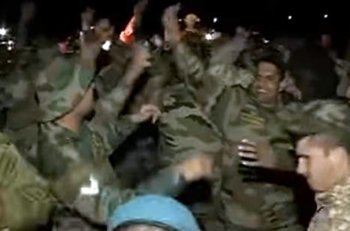 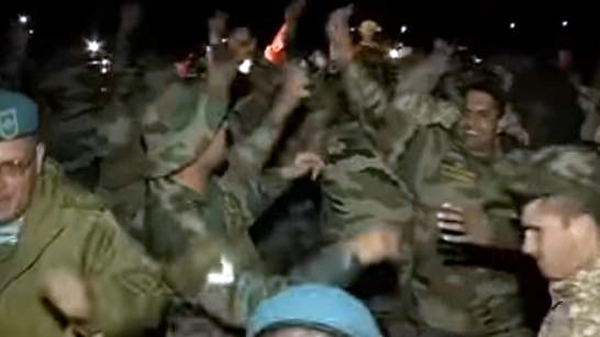 Newsroom, Aug 31: An extremely rare video of Indian and Pakistani soldiers dancing to Bollywood tunes has now gone viral on social media. Soldiers from both sides seem to be having a good time matching their steps to the Punjabi music.

The scene was captured on the sidelines of the recently-concluded mega anti-terror drill of the Beijing-based Shanghai Cooperation Organisation or SCO at Chebarkul town in Russia. The exercises involving troops from eight SCO member countries began on August 22 and ended on August 30.

The joint exercise titled Peaceful Mission 2018 was conducted by the Central Military Commission of Russia. It involved tactical level operations in an international counter insurgency or counter terrorism environment under the SCO Charter.

China had welcomed the joint participation by India and Pakistan in the counter-terrorism drill.

At least 3,000 soldiers from China, Russia, Kazakhstan, Tajikistan, Kyrgyzstan, India and Pakistan participated in the drill. The Indian contingent of 200 personnel was primarily composed of troops from infantry and affiliated arms and services along with the Indian Air Force.

"We welcome India and Pakistan's joint participation in this counter-terrorism exercise under the SCO framework," Chinese Foreign Ministry spokesperson Hua Chunying has said earlier this week. These two countries are important ones in South Asia," she said, adding that stable relationship between the two countries is "significant to the peace and development of the region and the whole world."

"We sincerely hope that they could enhance their dialogue and cooperation both bilaterally and within multilateral mechanisms like the SCO, work together to improve their ties and jointly maintain regional peace and stability," she had said.

The Shanghai Cooperation Organisation was established in Shanghai in 2001, with China, Russia, Kazakhstan, Kyrgyzstan, Tajikistan and Uzbekistan as founding members. It expanded to include India and Pakistan in 2017.