Voting for Kateel for the sake of Modi is like marrying the mother of the bride: C M Ibrahim 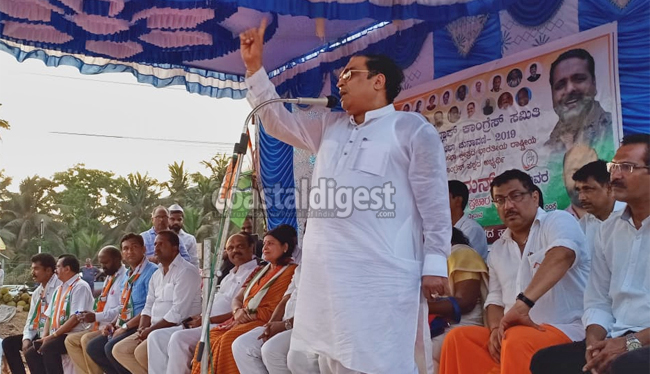 Mangaluru, Apr 16: Congress leader and MLC C M Ibrahim, has taunted the fans of Prime Minister Narendra Modi in Dakshina Kannada over their readiness to vote for any kind of candidate fielded by the Bharatiya Janata Party in their constituency.

Addressing a campaign rally in favour of Congress candidate Mithun Rai on the outskirts of the city today, the demagogue called upon the people to vote for the right candidate who can solve their problem instead of an uneducated who delivers provocative speeches in front of the people of the district and hesitates to utter a word in the Parliament.

He was referring to the incumbent MP Nalin Kumar Kateel’s speech wherein he had threatened to set entire district on fire if the police failed to fulfil his demands.

Mr Ibrahim said that even BJP workers are fed up of Mr Kateel, but their blind love towards PM Modi is forcing them to vote for Mr Kateel.

“Bhakts (fans of PM Modi) in this district are helpless. They say that they don’t want Mr Kateel, but they want PM Modi. Hence they vote for Mr Kateel for the sake of Mr Modi. This is like a bridegroom marrying his bride’s mother or father after seeing her,” he said.

Voting for Kateel for the sake of Modi is like marrying the mother of the bride: C M Ibrahim