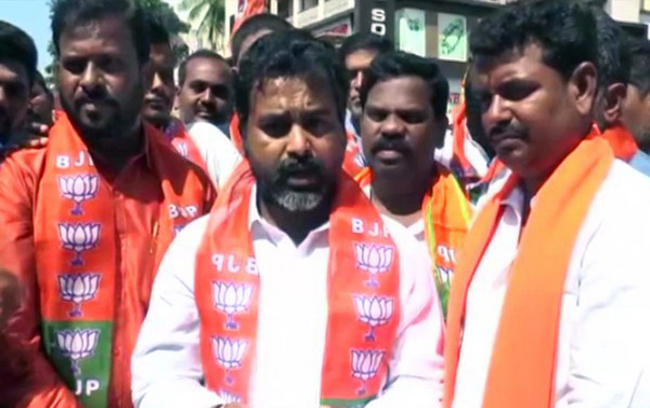 Bellari, Feb 23: Fringe outfit Sri Ram Sena leader Sanjeev Maradi said on Friday said that organization will reward Rs 10 lakh to the person who will 'eliminate' those who have raised "pro-Pakistan" slogans including Amulya who recently raised "Pakistan Zindabad" slogan at an anti-CAA protest in Bengaluru.

"We request both state and central government not to release them (Pro-Pakistan sloganeers) on bail. If they will be released Sri Ram Sena will eliminate them or will give a reward of Rupees 10 lakh to those who kill them," said Sanjeev Maradi.

"We condemn such slogans. This is like a virus. First, it happened in Jammu and Kashmir, then in JNU, then Mysore and then a student named Amulya raised pro Pakistan slogan in Bengaluru," he added.

Thereafter, a case was registered under Section 124A (Offence of sedition) of the Indian Penal Code against the student.

Meanwhile, Imran Pasha, the organizer of the anti-CAA protest said that Amulya was not invited to the event.

"We were the organizers of the event. At around 6:45 pm on Thursday, when I and Member of Parliament Asaduddin Owaisi were entering the stage area, we did not notice Amulya was present there. I did not invite her," Pasha told media.

So theese guys have come out in public with supari and police department is on mute mode .

Spirit of quarter bottle and plate of Beef Sukha. Subject to HQ feeding these are awake else always with DUFF and Blind eye and now nil knowledge about our Nation. What are the nation organization institution are day by day loosing .

O God Give some education knowledge these sena soldiers to behave like human.