Bengaluru, Feb 28: “Those who struggle to come up can understand people’s problems better. Yediyurappa is one such leader who has reached this position after a struggle,’’ said former chief minister Siddaramaiah, in praise of Chief Minister BS Yediyurappa, who celebrated his 78th birthday on Thursday in Bengaluru. 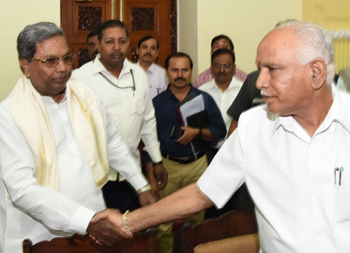 Siddaramaiah was the only non-BJP leader on the dais, who not only attended the event, but was present throughout. He released a coffee table book, ‘A Leader who Saw Tomorrow’, on Yediyurappa’s life and achievements, compiled by The New Indian Express.

“Yediyurappa did not become chief minister just like that. It took years of struggle and hard work. We both have many similarities — neither of us came from political backgrounds. We came up through struggle and those who come from such backgrounds understand people,’’ he said.