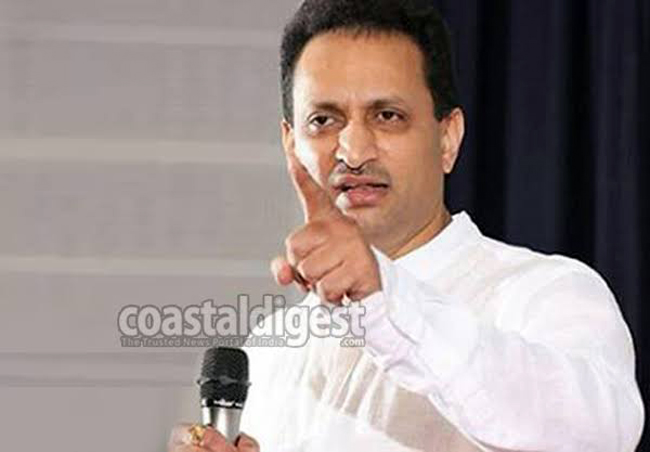 Senior BJP leader and Uttara Kannada MP Anant Kumar Hegde, has not only branded Mr Senthil a “gaddar” (traitor), but also asked him to leave India and go to Pakistan.

“The state government should realize that it should have sacked him after he opened his polluted mindset against the Union Government,” Mr Hegde said reacting to a news article on efforts to convince Senthil against resigning.

“But cajoling this gaddar to return, amounts to treacherous act against the nation,” Hegde, a former Union minister, added.

On Friday last week, Senthil announced his resignation from the IAS citing “ideological issues” and it was widely seen as angst directed at the Narendra Modi administration at the Centre, especially after the abrogation of Article 370 in Jammu & Kashmir.
In his resignation letter, Mr Senthil said: “I have taken this decision as I feel that it is unethical to continue as a civil servant in the government when fundamental building blocks of our diverse democracy are being compromised in an unprecedented manner.”

“The coming days would present extremely difficult challenges in the basic fabric of the Nation. As such it would be better to be outside IAS to continue my work,” he added.

Hegde went on to justify branding Senthil as a traitor. Reacting to one of Senthil’s interviews in which he says India was witnessing a “fascist onslaught,” Hegde said: “If this guy can conclude that the Union Government is fascist, then we have the liberty to call him another paid Gaddar, dancing to the tunes set by his real paymasters!  This may be the debate he wants to initiate!”

Continuing his tirade against Senthil, Hegde asked Senthil to go to Pakistan. “The first thing he should do is to migrate to Pakistan along with those who have supported his views. This is practically easy and the final solution also. Instead of breaking the country by staying here, he can go there (Pakistan) and fight against our country and our government. Let loyalty be shown in this at least,” Hegde said.

those who vote to modi and hindutva must ready to face the biggest problem in 2020..

when you dont have signle paisa in pocket you will understand what is life ...that time you can recall hindu nation, ram mandir, goo mata, beef bank, muslim hate etc.

muslim no need to worry we can eat 1 time food and survive...

Hindua and others should know the truth...

I think BJP should OPen the travel office and should be pakistans tourisms agent. Because they are very desparate to send loyal indians to pakistan. As news comes in media that our NSA's Son is having links of his business to pakistan. he may help Mr hegde to open one branch in his native place sirsi. SHame on BJP. When whole india hates Pakistan this BJP peoples cant survive without them.

If a honest officer like Mr. Senthil can out and express his true views on the government's sick activities, see where are moving to?

The country is moving towards distruction.

Peace is no more in the country.

These blind stupids can not understand. Now it is the time of end.

Countdown started and speeding to end.