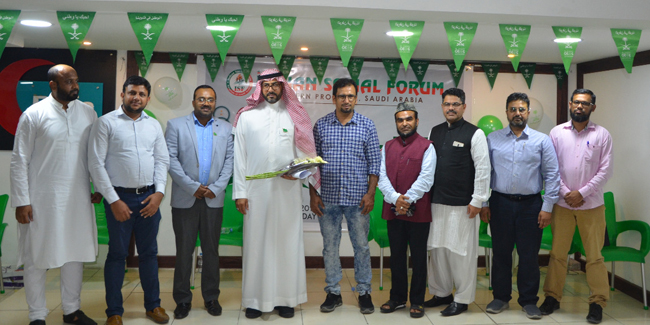 Mr. Tahir Hyderabad, Secretary, Indian Social Forum, Central Committee, said being the largest expatriate community in the Kingdom of Saudi Arabia, Indians honestly consider Saudi Arabia as their ‘second home. The Indian community in Saudi Arabia has been well accepted at all echelons of the Saudi society and regarded as a community that is vital to the development of the country. Both countries are enjoying friendly relationship. And he extended his congratulations to the Kingdom’s leadership and Saudi society.

Mr. Masoor Shah of Hyderabad, Mr. Shernas Ashraf of Kerala, Mr. Salahudheen of Karnataka, Mr. Habeeb of Tamilnadu, Nameer Cheruvadi of Kerala were also invited as Guests and spoke on this occasion.

Indian Social Forum – which embraces the entire Indian expatriate community in the Kingdom of Saudi Arabia. We aims to support the Indian expatriate community beyond regional, religious and linguistic barriers. The forum’s prime focus shall be welfare of the weaker sections among our community by taking active part in identifying their problems and helping them to resolve it legally. The Forum’s all activities are targeting to promote national integrity and communal harmony through cultural interactions and enlighten the importance of unity and thus take part in their nation-building process.