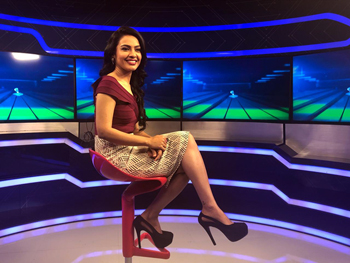 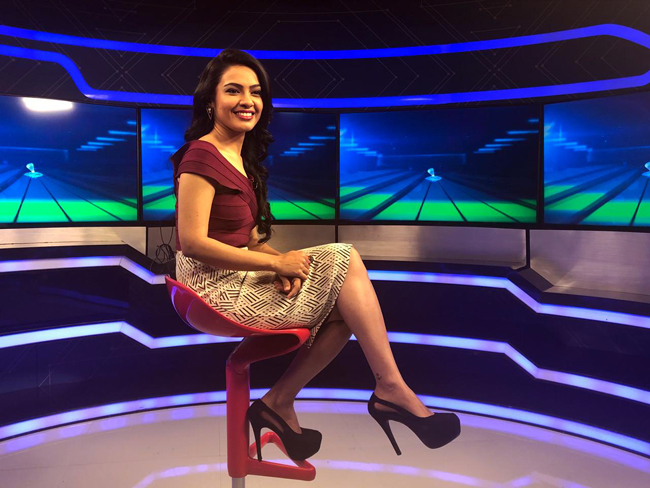 The advent of Star Sports into Kannada - a language which is already replete with nearly three dozen state-level television channels - has brought forth an accomplished anchorwoman, who can steal the hearts of television audience in Karnataka in general and sports enthusiasts in particular through her astute presentation amidst the hullaballoo of a bunch of sanctimonious and strident anchors cutting across the news and the entertainment channels.

Flashing a million dollar smile Madhu Mailankody was the first anchor to go live on air after the Walt Disney owned Star India recently launched the Star Sports 1 Kannada, said to be the country’s first and only dedicated Kannada sports channel.

The all-round ‘Sport Presenter’ is one of the very few female specialists in all forms of sports and games including cricket, football, badminton, kabaddi and volleyball in Karnataka. She is now often seen hosting various sports shows and programmes and interviewing sports legends on the channel. In spite of her acumen and insightfulness, the gorgeous girl’s humility and not so ‘holier-than-thou’ attitude has set new standards for anchoring and sports presentation in Kannada.

“How do you feel?” I drag her into a conversation on WhatsApp after watching her live on the television. “Working with legends of various sport and sharing work space with them... A good opportunity to interact with sports giants from across the world like Brian Lara, Brett Lee, Scott Styris, Anil Kumble, Irfan Pathan, Harbhajan Singh, Virendra Sehwag, Venkatesh Prasad…,” Madhu candidly responds before heading back to studio for shoot.

Madhu is a Mangalurean. Nay, a young Kasaragod Kannadiga woman, who even before entering the Star Sports had carved a niche in the hearts of Mangalureans through anchoring and hosting various events for past several years. Knowing that she is an out-spoken but publicity-shy woman who exudes genuine passion and commitment for her work, I obliquely pester her to tell me more about herself. She strikes me as a self-made woman, unburdened by all her God-gifted talents and achievements.

The desi girl’s lucid English, immaculate Kannada, chaste Hindi, friendly Malayalam and cordial Tulu coupled with an affable body language always make her stand out from the rest. Madhu’s multilingual and multicultural mastery makes her “an anchor sans borders” who can easily engage with diverse audience in almost all Indian states and beyond. She has won the applause of NRI audiences in Middle Eastern countries like United Arab Emirates, Qatar and Oman.

Madhu shares a close bond with the word ‘League’. She entered Star Sports in 2017 as an anchor for Indian Super League (ISL), the most premium football league of the country. In 2018-2019 she was an anchor for the Pro Kabaddi League (PKL). In 2018-2019 she was a host for the entire Premiere Badminton League (PBL). She has been the ground MC for Karnataka Premiere League (KPL) since 2015. She was the solo host for three seasons of Mangalore Premier League (MPL) and then went on to become the voice of Bengaluru’s M Chinnaswamy Stadium for over 35,000 spectators during Indian Premier League (IPL). She also played the role of an anchor during several international cricket tournaments. Earlier this year she was part of the Asia Federation Cup.

The secret behind the magnanimous Madhu’s lively personality lies at ‘Mailankody’ in the pristine village of Perdala off Badiyadka town in Kasaragod district, where she was born as the second and last daughter of Savithri G Bhat and M Ganapathi Bhat, who opted agriculture after completing his post-graduation at a juncture when millions of rural Indians quit agriculture and migrated to towns and cities. She was brought up in the same village before shifting to Namma Kudla for college education. An alumnus of St Agnes and St Aloysius, two of Mangaluru’s prestigious colleges, Madhu is a passionate traveler, who prefers to spend time with the nature than in shopping malls and restaurants. The father’s pet daughter turns herself into a volcano of self-confidence when she says, “I am purely an independent girl!” 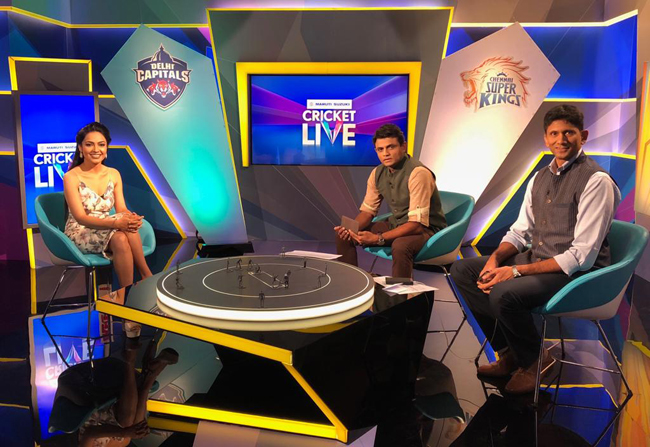 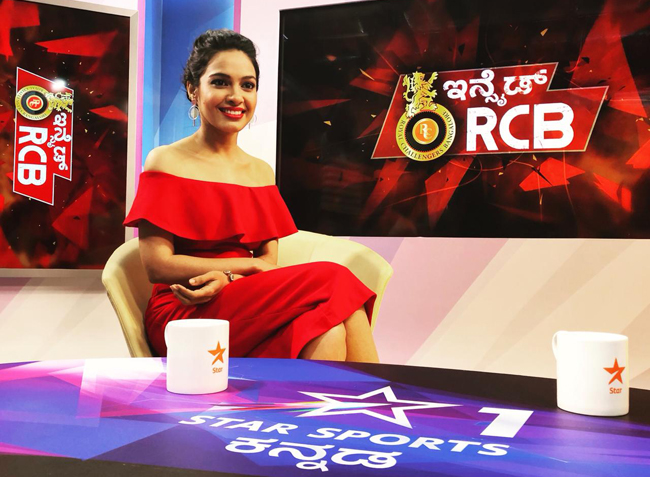 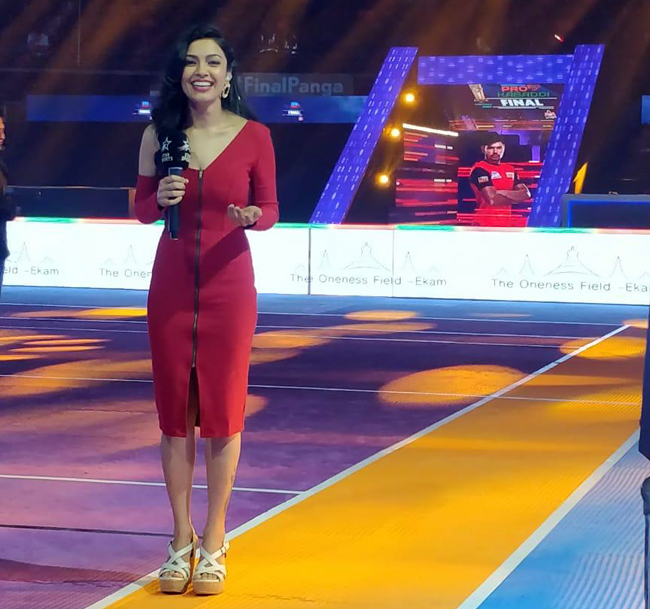 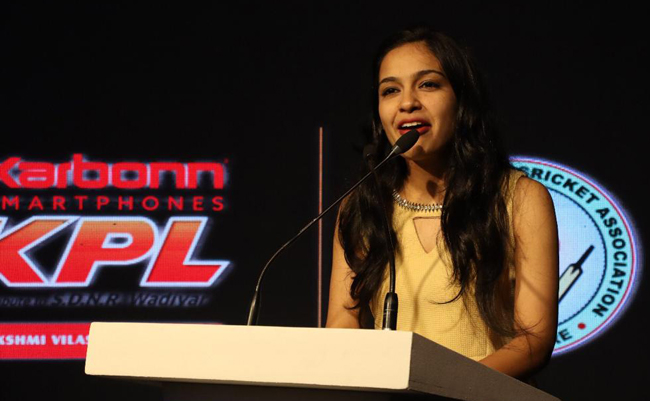 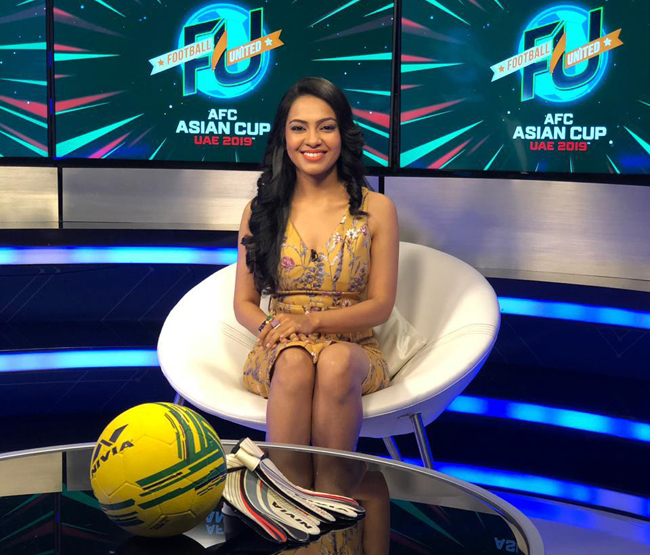 Wonderful article on a wonderful girl. Proud of you Madhu Mailankody. God bless.

Nice piece of article on a nice girl. All the best Madhu

Madhu Malankodi is quite familiar in Mangalore. Happy to see her scaling new heights. I liked the last line: “I am purely an independent girl”. You are practically a feminist. I must thank the writer Mr Abhishek N Bhat for the beautiful write up.

Wonderful woman. One should live life like this! I worked Madhu during an event in Mangalore years ago and received my first salary from her.

A stupendous performance and achievement - By Madhu Mailankdy - hailing from a remote rural place - proving that it is one's talent, attitude and passion that makes or marks a person - one need not be City bread to be an achiever -  Congratulations and compliments to this simple girl from Perdala - who has carved a niche for herself in the arena of sports presentation