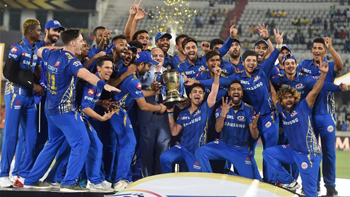 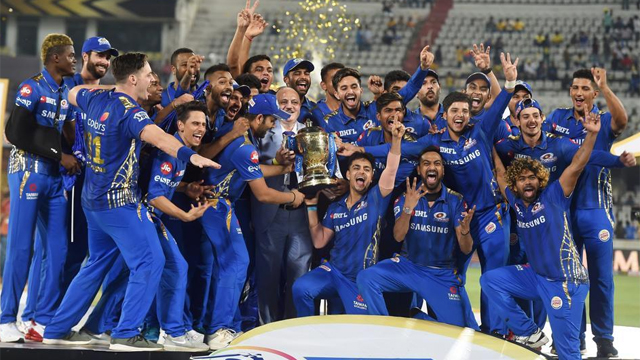 Hyderabad, May 14: Lasith Malinga produced an incredible last over to defend nine runs as Mumbai Indians claimed undisputed supremacy in the IPL by securing their fourth title with a narrow one-run win over Chennai Super Kings in a pulsating final on Sunday.

CSK needed nine runs off the last over but the experienced Lankan paceman Malinga kept his nerve to concede eight. He trapped Shardul Thakur leg before in the last ball after Watson (80 off 59) got run out two balls earlier.

Before that Jasprit Bumrah kept Mumbai in the hunt with his tidy overs and two wickets, getting rid of Dwayne Bravo and Ambati Rayudu. The premier Indian pacer produced 13 dot balls in his testing overs. Young leg-spinner Rahul Chahar also played a key role in the middle overs as he too created pressure by bowling 13 dot balls.

Both teams were tied at three IPL titles each heading into the finale with Mumbai holding the upper hand, having beaten CSK thrice earlier in the competition.

The heart-stopping finish came after a disciplined bowling performance from CSK who restricted Mumbai Indians to 149 for eight.

CSK have now lost to Mumbai for the third time in four finals.

CSK had made a steady start by reaching 53 for one in the Powerplay but Mumbai bounced back in the middle overs, removing a struggling Suresh Raina (8 off 14) before getting rid of Rayudu to have Chennai under the pump.

The biggest moment of the game came in the 13th over when Dhoni was run-out trying to steal an extra single. An alert Ishan Kishan was spot on with his direct hit and he just managed to get the better of Dhoni.

Since it involved the CSK skipper, high drama was on display as third umpire Nigel Llong saw replays with all possible angles and took his time before making a very difficult decision.

It was an outstanding effort from Chahar (1/14) in the middle overs, putting CSK under tremendous pressure as they could collect only 16 runs between 11-15 overs with the loss of two wickets.

Against the run of play, Watson walloped Malinga for three fours and a six in the 16th over that went for 20 runs and kept CSK in the game.

The game-changed drastically in CSK's favour when Watson hammered Krunal Pandya for three consecutive sixes, reducing the target to 18 off 12 but somehow Mumbai managed to keep CSK at bay.

After opting to bat in a big game, Mumbai ended up with a below-par total despite Kieron Pollard's unbeaten 41 off 25 balls.

Deepak Chahar (3/26) was impressive once again and so was fellow pacer Shardul Thakur (2/37). The spinners, Harbhajan Singh (0/27) and Imran Tahir (2/23), too played a crucial role in limiting Mumbai. Forty-year-old Tahir also became the leading wicket-taker in the tournament with this effort, increasing his tally to 26.

Rohit Sharma-led side was dealing in sixes early on in their innings with the in-form de Kock collecting three sixes out of the four hit in the first three overs.

After a frugal first over, Chahar went for 20 runs in the following one with the South African wicket-keeper batsman going for his strokes on a true surface.

All of a sudden, a promising start got converted into a wobbly one with Rohit getting caught behind off Deepak Chahar right after de Kock's fall, leaving Mumbai at 45 for two in the sixth over. The Mumbai captain got deceived by a slower one but he still went for the drive, only to edge it to Dhoni.

It was a brilliant comeback from Chahar after being hit for 20 in his previous over and credit to Dhoni for bringing him back into the attack and keeping the faith in the team's most successful pacer this season.

With two new batsmen at the crease, the runs dried up before Ishan Kishan hit Dwayne Bravo for two boundaries to take Mumbai to 70 for two in 10 overs.

Just when it seemed Kishan and Qualifier 1 hero Suryakumar Yadav will produce a much needed partnership, two wickets falling in quick session for the second time in the innings pegged Mumbai back.

It got worse for Mumbai when Kishan tried to deposit a Tahir googly out of the park and his mishit went into the safe hands of Suresh Raina at cover, leaving Mumbai at 105 for five in 15 overs.

Two of the biggest hitters in the game, Hardik and Pollard, were in the middle to put life into the innings and take their team to a fighting total.

CSK, who had done most things right up till then, gave a breather to Pandya as Raina dropped a regulation catch at cover. The dangerous Pandya made his opponents pay smashing Thakur for two sixes in the same over before getting out.

Pollard at the other end did not get enough strike in the death overs. He finally faced all six balls in the final over and did not take the single off the first three deliveries after not being able to clear the boundary. He got the much needed fours off the final two balls but it was not enough to spoil a tidy last over by Bravo.