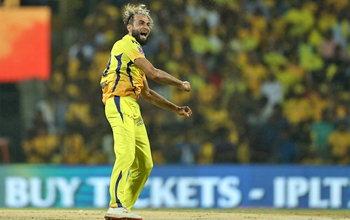 Kolkata, Apr 15: Imran Tahir spun a web before Suresh Raina found his mojo back with a half-century as Chennai Super Kings inched closer towards another playoff qualification with a five-wicket victory over Kolkata Knight Riders in an IPL match on Sunday.

After Tahir's career-best 4 for 27 restricted KKR to 161 for 8, CSK coasted to the target in 19.4 overs as Raina anchored the chase with an unbeaten 58 off 42 balls with seven fours and a six.

Ravindra Jadeja also played an important cameo hitting 31 off 17 balls to pave the way for the team's seventh win in eight games.

Needing 24 runs off the last two overs, Jadeja smashed Harry Gurney for three successive fours to make it just a formality in the last over.

This was the defending champions fourth win on the trot as they consolidated their position atop the table with 14 points and one more win will virtually seal their spot in play-offs whose cut-off over the ears has been 16 points.

This was also their first win at the Eden Gardens since 2013 as they did a double on KKR who suffered a hat-trick of defeats for the first time since 2014 and set to slip out of their second place in the table. Incidentally, 161 is their lowest score at the Eden this season.

Sunil Narine was the pick of KKR bowling with figures 2/19 that included a wicket-maiden when he cleaned up Faf du Plessis (24) to end the powerplay.

But Raina held on at the other end with significant partnerships including a 40-run stand with skipper MS Dhoni.

It all seemed a walk in the park for CSK when Narine gave the biggest breakthrough dismissing Dhoni for 16 with team's score of 121/5, needing 41 runs from 26 balls.

But Raina held his nerves while Jadeja gave the finishing touches. On an Eden Gardens track where spinners had struggled so far, Tahir spun the match in favour of Chennai with his twin double blows in the 11th and 15th overs en route his career-best IPL figures that took him past Kagiso Rabada in the leading wicket-takers' tally.

Tahir removed an ominous-looking Chris Lynn (82 off 51 balls; 7x4, 6x6) and in a space of four balls removed the dangerous Andre Russell (10) for the first time under a score of 40 this season to put brakes on their scoring.

Tahir's bowling had such devastating effect that KKR managed just 28 runs from last five overs and went on to lose three more wickets to end up with a below-par total.

But it was a different script for KKR early on with a fit-again Lynn giving them a flying start en route to his second fifty this season that came off just 36 balls.

Having missed his team's last match because of flu, Lynn went ballistic against Deepak Chahar who bled 22 runs from his first two overs with the Aussie smashing the seamer for 4-6-4 in the third over.

Such was Lynn's dominance that the otherwise explosive Sunil Narine looked like a spectator at the other end with the Aussie having a share of 31 off 33 runs in the first four overs.

A 200-plus total looked imminent with Lynn looking dangerous and Russell starting to explode with a boundary and a six off Tahir.

But Tahir, aided by some brilliant catching from Faf du Plessis and the substitute Dhruv Shorey, made inroads removing Nitish Rana (21) and Robin Uthappa (0) in space of two balls.

CSK's catching was exceptional with Du Plessis charging in from long-off to dismiss Uthappa off first ball, then Shradul Thakur at deep square leg clung onto a flat hit from Lynn.

The big one was that of Shorey when he charged in for a swerving low catch to get rid off Russell, who looked in his usual explosive zone with 10 runs from 4 balls (1x4, 1x6).