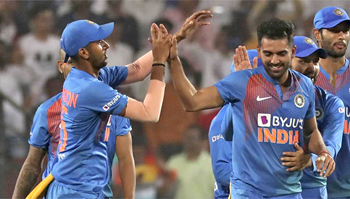 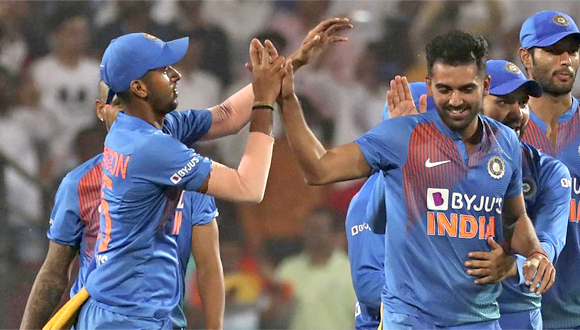 The bowling figures of 6-7 by Chahar are the best recorded by a bowler in the T2OI format. Chahar also took a hat-trick in the match as he dismissed one batsman on the last ball of the 18th over and then he dismissed two batsmen in the opening two balls of the 20th over. Chasing 175, Bangladesh lost Liton Das (9) and Soumya Sarkar (0) on successive deliveries in the third over as Deepak Chahar sent both batsmen back to the pavilion. Indian bowlers were able to maintain a stranglehold over their opponents and as a result, Bangladesh could only score 33/2 in the first six overs.

Mohammad Naim and Mohammad Mithun got together at the crease and the duo revived Bangladesh`s innings. The left-handed Naim, especially took a liking to Shivam Dube and kept on dispatching him for regular boundaries. With the pressure mounting on the hosts, skipper Rohit Sharma decided to introduce Chahar back into the attack and he did not disappoint as he dismissed Mithun (27).

Dube, who got dispatched for boundaries staged a comeback as he sent Mushfiqur Rahim (0), Mohammad Naim (81), Afif Hossain (0) back to the pavilion, bringing India right back into the match with Bangladesh still requiring 49 runs for the win.

Yuzvendra Chahal dismissed Bangladesh skipper Mahmudullah (8) in the 17th over and this proved as the final nail in the coffin. This wicket was Chahal`s 50th T20I wicket and he joined Jasprit Bumrah and Ravichandran Ashwin in the list of Indian bowlers who have taken 50 wickets in the shortest format of the game. Bangladesh failed to recover from the dismissal of Mahmudullah and they finally lost the match by 30 runs.

Earlier, Iyer and KL Rahul`s knocks of 62 and 52 respectively enabled India to post a score of 174/5 in the allotted twenty overs.India got off to the worst start possible as skipper Rohit Sharma (2) was sent back to the pavilion in the second over of the innings. KL Rahul and Shikhar Dhawan, then put on a brief 32-run stand, but their resistance was cut short by Shafiul Islam as he dismissed Dhawan (19), reducing India to 35/2.

Shreyas Iyer next came out to bat and he provided much-needed support to Rahul at the other end. The duo mixed caution and aggression to keep the scoreboard ticking. Rahul brought up his fifty in the 12th over of the innings. Iyer and Rahul put up a 59-run partnership, but immediately after reaching his half-century, Rahul (52) was sent back to the pavilion in the 13th over by Al-Amin Hossain, reducing India to 94/3. However, Iyer did not allow Bangladesh to get momentum on their side as he kept on hitting big shots off the bowling of spinners. The right-handed Iyer brought up his maiden half-century in the 15th over.

Wicket-keeper batsman Rishabh Pant (6), once again failed to leave a mark with the bat as he was clean bowled by Soumya Sarkar in the 16th over. In the very same over, Sarkar sent Iyer (62) back to the pavilion, reducing India to 144/5.

Manish Pandey played some big shots in the final overs to take India`s total past the 170-run mark in the allotted twenty overs.India and Bangladesh will now face each other in the two-match Test series and the first game will be played from November 14-18.