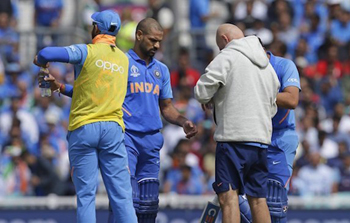 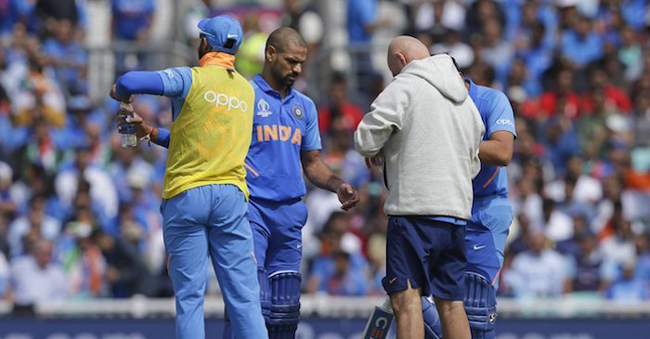 London, Jun 11: Team India suffered a huge jolt on Tuesday as opener Shikhar Dhawan was ruled out of the 2019 World Cup for three weeks with a fractured thumb. Dhawan was hit by a ball from Nathan Coulter-Nile during his brilliant century against Australia at The Oval on Sunday. He was in pain but continued to bat with a tapped thumb. During the Australia innings, it was Ravindra Jadeja who took the field for Dhawan.

Speaking to media, sources in the know of developments said that it didn't look very rosy after the swelling refused to subside.

"Patrick Farhart has done the initial treatment and Dhawan had iced the thumb for quite a bit, but the swelling just didn't subside and that is when we decided that this needed a scan," the source said.

Going into the game against Australia at The Oval, Dhawan didn't have the best of starts to this year's World Cup, but back at his favourite hunting ground, the opener looked in fine spirit as he hit his first hundred of the tournament.

Speaking after the game, the opener had said: "We are happy with the result as it was a great team effort. It's a great sign for our team and I'm happy with this man of the match award. We are very happy with the performance overall."

It is believed that K.L. Rahul will be asked to open the innings with Rohit Sharma in the match against New Zealand while a replacement will be sought after the team management decides on who they feel is most suited to fit into the playing XI. At present, Virat Kohli and Ravi Shastri can pick one from either Dinesh Karthik or Vijay Shankar for the New Zealand match on Thursday.