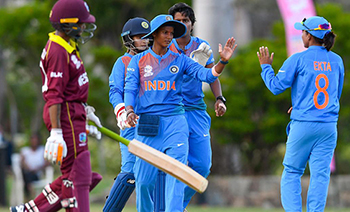 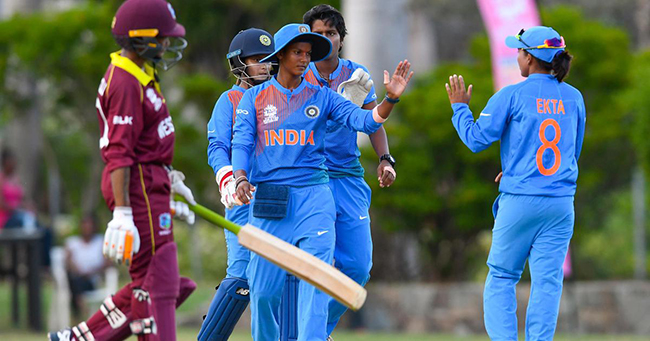 Chasing a target of 195, India's openers Jemimah Rodrigues and Smriti Mandhana provided a steady start and put on 141 runs for the first wicket.

They hit regular boundaries and both made half-centuries. Their partnership was broken in the 26th over but by then India had consolidated their position.

Rodrigues' dismissal brought Punam Raut out on the field. Two overs later Mandhana departed after scoring 74 runs as India was reduced to 150/2.

Skipper Mithali Raj came out to bat next and she had a partnership of 40 runs with Raut, but West Indies got the wicket of Raj (20) in the 40th over.

However, with five runs needed to win in eight overs, it was a cakewalk for the visitors.

Earlier, after opting to bat, West Indies got off to the worst possible start as Natasha Mclean (3) was sent back to the pavilion in the sixth over.

Hayley Matthews after scoring 26 runs left the ground in the 10th over. Shemaine Campbelle (7) soon followed Matthews as her stint at the crease was ended by Rajeshwari Gayakwad.

West Indies kept losing wickets at regular intervals and were soon at 180/6.

A flurry of wickets dented Windies hopes and the team folded up for 194 runs in the 50th over.

West Indies will next take on India in a five-match T20I series, starting from November 9.