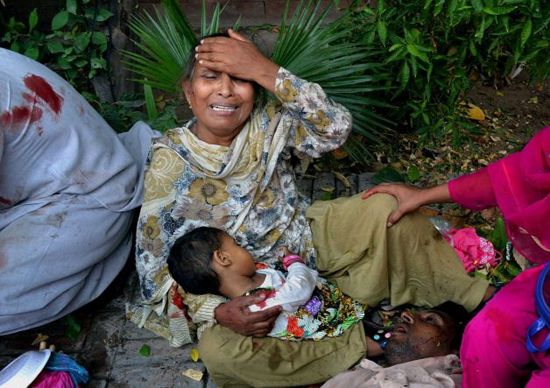 Peshawar/Pakistan, Sep 23: The death toll from a double suicide bombing on a church in Pakistan rose to 81 on Monday, as Christians protested across the country to demand better protection for their community.

The attack on All Saints church in the northwestern city of Peshawar after a service on Sunday, claimed by the Pakistani Taliban, is believed to be the deadliest ever to target Pakistan's small Christian minority.

Doctor Arshad Javed of the city's main Lady Reading hospital told AFP the death toll had risen to 81 overnight, including 37 women. A total of 131 people were wounded.

Christians demonstrated in cities around Pakistan, including Karachi and Faisalabad, to protest against the violence and demand better protection from the authorities.

Pakistan's umbrella Taliban movement claimed responsibility, saying it had set up a new faction, Junood ul-Hifsa, to kill foreigners to avenge US drone strikes on Taliban and al-Qaida operatives in the country's tribal areas along the Afghan border.

"We carried out the suicide bombings at Peshawar church and will continue to strike foreigners and non-Muslims until drone attacks stop," Ahmad Marwat, a spokesman for the group, told AFP by telephone.

In June, the group claimed responsibility for killing 10 foreign climbers at a base camp of Nanga Parbat, the second highest mountain in Pakistan after K-2.

Pope Francis also spoke out against the violence, calling it "a bad choice of hatred and war", while Pakistan's Ulema Council, an association of leading Muslim scholars, branded the attack "shameful".

Former minister for inter-faith harmony Paul Bhatti and provincial lawmaker Fredrich Azeem Ghauri both said the attack was the deadliest ever targeting Christians in Pakistan.

The small and largely impoverished Christian community suffers discrimination in the overwhelmingly Muslim-majority nation but bombings against them are extremely rare.

The 400 or so worshippers were exchanging greetings after the service when the bombers struck, littering the church with blood, body parts and pages from the Bible.

The walls were pockmarked with ball bearings that had been packed into the bombs to cause maximum carnage in the busy church.

Sectarian violence between majority Sunni and minority Shiite Muslims is on the rise in Pakistan but Sunday's bombings will fuel fears the already beleaguered Christian community could be increasingly targeted.

Islamist militants have carried out hundreds of bombings targeting security forces and minority Muslim groups they regard as heretical, but attacks on Christians have previously largely been confined to grenade attacks and occasional riots.

Khyber Pakhtunkhwa is a deeply conservative province bordering the tribal districts along the Afghan frontier which are home to Taliban and Al-Qaeda militants.

Provincial lawmaker Ghauri said there were about 200,000 Christians in the province, of whom 70,000 lived in Peshawar.

Only around two percent of the country's population of 180 million are Christian. The community complains of growing discrimination.

Christians have a precarious existence in Pakistan, often living in slum-like "colonies" cheek-by-jowl with Muslims and fearful of allegations of blasphemy, a sensitive subject that can provoke outbursts of public violence.

In the town of Gojra in Punjab province in 2009, a mob burned 77 houses and killed seven people after rumours that a copy of the Islamic holy book the Koran had been desecrated during a Christian marriage ceremony.

Rimsha Masih, a Christian girl who was arrested for alleged blasphemy last year, fled to Canada with her family in June after the charges were dropped.

"The death toll has risen to 56 and there are more than 70 wounded," Doctor Sher Ali, deputy medical superintendent of Peshawar's main Lady Reading Hospital, said.

An official said that the bomber targeted worshippers when they were coming out of one of the oldest churches in the city's Kohati Gate district after Sunday mass.

The church is situated in a very congested locality which is always jam packed with the people mostly women as the area is the hub markets and shopping centres. The Christian community lives in the vicinity and visited the church for Sunday service in large number.

No group claimed responsibility for the attack, but radical Islamists have been blamed for previous attacks on the country's minority communities, including Christians. 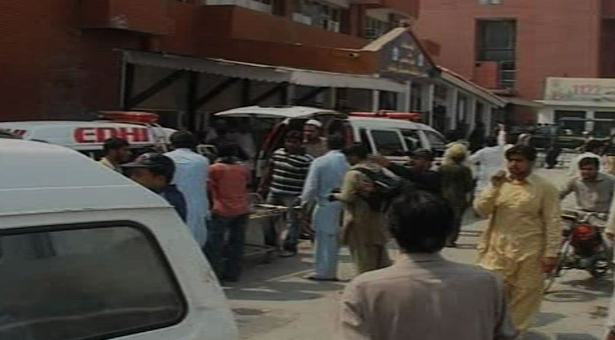