Islamabad, Aug 29: Pakistan's powerful army chief has stepped in to mediate between the embattled government and the protesters seeking resignation of Prime Minister Nawaz Sharif, bringing the military back into the centre stage and signaling a possible end to the high-political drama. 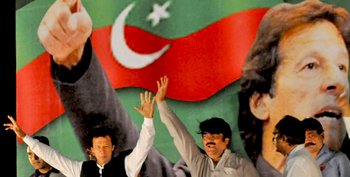 Khan wants the PML-N government's ouster over alleged rigging in last year's poll which his party lost, while Qadri wants to bring a revolution in the country.

According to well places sources, Interior Minister Nisar Ali Khan was also present during these meetings.

"It was agreed that army negotiators will have backdoor interactions with both sides today and prepare ground for an agreement between the two sides," sources said.

The government representatives will also meet the protest leaders and they will approve or sign the agreement mediated by the army.

After meeting Gen Sharif, Khan told his weary protesters that army has become "neutral umpire" in the crisis.

He still demanded resignation of the Prime Minister. "If he resigns we will celebrate it on Friday evening," he said.

Qadri also addressed his listless crowd of followers and said he had presented his revolutionary agenda to the army chief in the meeting.

Sources said that the deal brokered by army will address Khan's concerns about rigging and Qadri's basic demand of inclusion of clauses of anti-terror laws in the case already registered against Prime Minister Sharif, his brother and Punjab Chief Minister Shahbaz Sharif and others in Lahore.

Sharif is expected to survive in the political battle but he will become weak and unable to challenge army's grip on foreign and security policy of the country.

The army, which has so far been passive in the confrontation between the government and protesters, has a history of capturing power from democratically elected governments.

Sharif himself was removed from office during a previous stint as prime minister in a military coup by the then army chief Gen Pervez Musharraf in 1999.

When politician differed in 1977 over the outcome of polls, then army chief Gen Zia-ul Haq imposed martial law.

Meanwhile, leaders from across the political spectrum regretted the political tug of war that led to a crisis where the army got involved to settle dispute.

"After this, we will not be able to hold our heads high," Tehreek-i-Insaf leader Javed Hashmi, who is known for his outspoken opposition to military's involvement in politics, was quoted as saying by the Dawn.

"It is shameful time for all politicians who, despite having the time, could not resolve the crisis on their own."

Rightwing Jamaat-e-Islami chief Sirajul Haq had a more cautious response. He told a TV channel that if the army could intercede and end this crisis, well and good, but the military had no role in politics.

Jamiat Ulem-e-Islam-Fazal spokesperson Jan Achakzai had a similar response. "It is a failure of the politicians who could not resolve the crisis. But I welcome any deal that remains within the spirit of democracy and the Constitution."

Pakistan People's Party (PPP) leader Syed Khursheed Shah, who is also leader of the opposition in the National Assembly, said he would ask the prime minister why the army chief had to be asked to mediate when nearly all political parties were present in the house and had offered their support to him.

"After killing 14 innocent PAT workers, the Sharif brothers were unwilling even to register their FIR," he said, adding that the government's delaying tactics in dealing with PAT and PTI further complicated the situation.

Talking to DawnNews, prominent lawyer and rights activist Asma Jahangir criticised both Qadri and Khan, saying "Those who had wasted 15 days must be discouraged."

Nearly all parliamentary parties and politicians pleaded with them, but they did not heed anyone's advice, she said.

"Now, on a single phone call, they rush to Army House."

She criticised army's blatant involvement in political affairs and said instead of using their proxies to destabilise the system, why don't they impose direct military rule.

Secular Awami National Party Haji Adeel said it is wrong to make the military a political guarantor; parliament is the supreme guarantor.

"This is a major failure for all politicians," he said.