2 killed, 450 injured in police crackdown on protesters in Pak 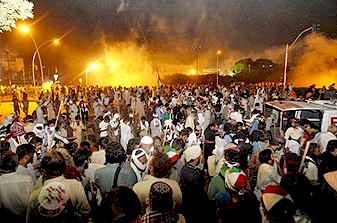 Islamabad, Aug 31: At least two persons were killed and about 450 others injured overnight when police baton- charged hundreds of anti-government protesters led by Imran Khan and Tahir-ul-Qadri who marched towards Prime Minister Nawaz Sharif's residence here demanding his resignation.

The clashes started after Tehrik-e-Insaf chairman Khan and Awami Tehrik chief Qadri yesterday ordered their hundreds of supporters to shift the protest venue in the front of the residence of Prime Minister Sharif to force him to quit.

Police fired tear gas shells and rubber bullets to disperse the protesters outside the prime minister's official residence and the adjacent parliament building.

Hundreds of protesters entered the lawn of parliament but they were pushed back at the main entrance of the building where army was deployed.

About 450 injured were brought to Polyclinic and Pakistan Institute of Medical Sciences, the two premier state-run hospitals, a government official said.

A police official said over 70 policemen and five Frontier Constabulary personnel were injured in clashes with protesters armed with sticks, catapults and stones.

Dr Ayesha Isani of the Pakistan Institute of Medical Sciences hospital told reporters that a man brought to the hospital late last night had passed away.

She confirmed that earlier a man was brought dead to the hospital who had drowned by falling into a trench.

So far the protesters failed to break into the security cordon and reach the PM House.

Khan was present in his container mounted on a truck and frequently addressed his supporters. He said he will register cases against the Sharif brothers and interior minister Nisar Ali Khan for ordering crackdown on protesters.

His party leader Pervaiz Khattak said that they will not stop until Sharif resigns, as the protest entered 18th day.

Qadri today emerged from his container and addressed the supporters in husky voice which he said was due to effect tear gas. "I salute my sons and daughters who won today," he said without explaining.

He promised to make another speech later on and vowed to continue to struggle till final victory of "revolution".

Fearing backlash from protesters, roads leading to Prime Minister Sharif's Lahore residence, where he is currently residing, have been blocked and heavy contingent of police deployed. His brother and Punjab Chief Minister Shahbaz Sharif is also living there.

Sharif had left the prime minister house in Islamabad for his Lahore residence, which is sprawling on acres of land, on Friday along with his personal staff.

"Sharif had vacated the prime minister house fearing it might come under siege from the protesters," a source in the ruling PML-N said.

"Sharif will not move to the prime minister house in Islamabad till the police manage to clear the area from Khan's Pakistan Tahreek-i-Insaf and Qadri's Pakistan Awami Tahreek," the source said, adding Sharif and his family members would not travel by road in the present circumstances.

Information Minister Pervaiz Rashid said that protesters had committed a crime by attacking parliament which is a "symbol of democracy".

Intermittent clashes are continuing and fresh contingents of police were sent this morning as reinforcement.

The situation was very tense in the capital as a number of demonstrators refused to budge from the protest site.

Both the leaders are agitating since August 14 against alleged rigging during the last year general elections.

A late night government announcement categorically ruled out Sharif's resignation and there is no threat to his life.

Meanwhile, the protesters clashed with police at famous Liberty Chowk and the Mall Road in Lahore. Half a dozen protesters suffered injuries and were shifted to hospital where their condition is stated to be out of danger.

A group of Khan's supporters gathered outside the residence of Defense Minister Khawaja Asif in Sialkot, some 150 km from Lahore, and pelted stones at it.

Police, however, managed to disperse them.

In Multan, some 350 km from Lahore, the Tehrik-e-Insaf activists blocked the motorway road for several hours. Police used baton to disperse them.

Tehrik-e-Insaf Punjab president Ejaz Chaudhry said: "Today we will block all entry and exit points of Punjab province. We will bring the life to standstill to pressure Nawaz Sharif to resign."

Opposition leaders have criticised both Khan and Qadri for inciting violence.

Jan Achakzai of Jamiat Ulema-e-Islam said that both Qadri and Khan talked about western democracy but what they did was in clear violation of international democratic norms.

Pakistan People's Party Aitizaz Ahsan said that demand for resignation was illegal and the Prime Minister should not accept it. He blamed the protesters for the violence.

2 killed, 450 injured in police crackdown on protesters in Pak