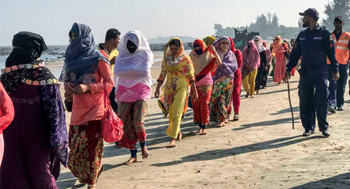 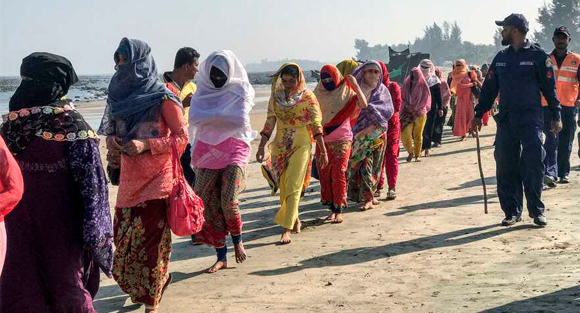 Saint Martin's Island, Feb 12: At least 15 women and children drowned and more than 50 others were missing after a boat overloaded with Rohingya refugees sank off southern Bangladesh as it tried to reach Malaysia Tuesday, officials said.

Some 138 people -- mainly women and children -- were packed on a trawler barely 13 metres (40 feet) long, trying to cross the Bay of Bengal, a coast guard spokesman told news agency.

"It sank because of overloading. The boat was meant to carry maximum 50 people. The boat was also loaded with some cargo," another coast guard spokesman, Hamidul Islam, added.

Nearly one million Rohingya live in squalid camps near Bangladesh's border with Myanmar, many fleeing the neighbouring country after a 2017 brutal military crackdown.

With few opportunities for jobs and education in the camps, thousands have tried to reach other countries like Malaysia and Thailand by attempting the hazardous 2,000-kilometre journey.

In the latest incident, 71 people have been rescued including 46 women. Among the dead, 11 were women and the rest children.

Anwara Begum said two of her sons, aged six and seven, drowned in the tragedy.

Fishermen tipped off the coast guard after they saw survivors swimming and crying for help in the sea.

"We swam in the sea before boats came and rescued us," said survivor Mohammad Hossain, 20.

An estimated 25,000 Rohingya left Bangladesh and Myanmar on boats in 2015 trying to get to Thailand, Malaysia and Indonesia. Hundreds drowned when overloaded boats sank.

Begum said her family paid a Bangladeshi trafficker $450 per head to be taken to Malaysia.

"We're first taken to a hill where we stayed for five days. Then they used three small trawlers to take us to a large trawler, which sank," she said.

Shakirul Islam, a migration expert whose group works with Rohingya to raise awareness against trafficking, said desperation in the camps was making refugees want to leave.

"It was a tragedy waiting to happen," he said.

"They just want to get out, and fall victim to traffickers who are very active in the camps."

Islam said in the past two months dozens of Rohingya reported approaches from traffickers to his OKUP migration rights group.

"Human smuggling and trafficking in the Bay of Bengal is particularly difficult to address as it requires concerted effort from multiple states," the Bangladesh head of UN agency the International Organization for Migration, Giorgi Gigauri, told news agency.

"The gaps in coordination are easily exploited by criminal networks."

Since last year, Bangladeshi authorities have picked up over 500 Rohingya from rickety fishing trawlers or coastal villages as they waited to board boats.

Trafficking often increases during the November-March period when the sea is safest for the small trawlers used by traffickers.

Bangladesh and Myanmar signed a repatriation deal to send back some Rohingya to their homeland, but none have agreed to return because of safety fears.

The charity Save the Children called on Myanmar to "take all necessary steps to ensure the Rohingya community can return to their homes in a safe and dignified manner".

"The tragic drowning of women and children... should be a wake-up call for us all," the group's Athena Rayburn said in a statement.