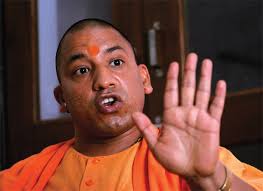 “A team of the AIMMM found that reports of kidnappings of Muslim girls, sometimes as young as 12 years, are true. Many of such girls have vanished, some are known to be living with their Hindu “husbands” while some have succeeded to run away and return to their families”, the NGO said after visiting the Kushi Nagar district in eastern Uttar Pradesh.

“The delegation found that young girls are kidnapped or lured away from their villages. They are taken to Gorakhpur and other places where they are raped, subjected to shuddhi (purification) and then forced to marry Hindu boys”, it added.

Adityanath’s Hindu Yuva Vahini and allied militias play a pivotal role in this criminal activity which is made more sinister since all girls are under-age.

The AIMMM delegation toured various areas of the district met a number of victims, talked to community leaders.

Fact-finding report on disturbing conditions in Kushinagar district also includes that Kushinagar district police and local administration are preventing the Muslims places to repair work on extend existing mosques or build new mosques on private land throughout the district. The village has 25 Muslim houses and 750 Hindus houses.

The team of delegation also visited some villages where one-sided riots are engineered since 2013 to grab Muslim land or on minor issues with a view to teach Muslims a lesson.

AIMMM has asked the state government to take strict notice on these atrocities against Muslims.

Aditiya Anand is a Hard core communal Hindu terrorist working under the shelter, protection and with the support of BJP. Second one is shakshi maharaj. They are not the saints or Sadhus but are the goons only to terrorize the minority classes as well as scheduled castes and backward classes.The government is keeping a blind eye toward these anti social elements.They must be controlled and debated from anti-social activities at the earliest possible. otherwise government of India will have to face the revolt from within the party folds. As there are people who are against such elements and do not want to set these bhagwa/saffron dressed miscreants free from the clutches of the law and order. The ministry of HOME Affairs must turn the cannons of law and order towards these anti-social...anti religious....anti law....anti humanism people.

Fake yogi
Put him in jail

AIMMM must file a case (nirbhaya a Ct?)
The trails and full investigation should in camera and identity of the victims shouldn't revealed.

Dear coastal digest my humble request with you please do not post PSYCHIATRISTS comments.

Naren potian can you send your sister to this place?

#RUC taken many action on it with their team

first of belated happy new year wishes for ultra nationalist Indian s ,who thinks nation first and religion second ...hahaha Look at the frustration among Itch guard users from one particular community ... all fake news .sorry to say CD is not at all posting news in which islamic millitants committing henious crimes and terrorists acts , be it in malda or in Bihar or pathankot ... even papa al quaida terrorist sikkagle in bangalore, chummah antha ummah kottu , chumma chumma dede antha ummah ge hurt agbardu antha news ne haakalla ..this shows the maturity of this news media , fake victimisation is new found technic by muslims but everybody knows the truth mama.. One particular religion on daily basis kidnaps 1000's of non muslim gals based on instruction from headless and rapist preachers , who scream for jihad ... we know how these piece piece religion sells women in petrol pumps of raqqa,syria on USD basis ... hahaha .

Are these girls Sunni or Siya.?

How some young men becoming nexalites, terrorists, decoits???
because of \gomuka vyagra\" criminals existing in our places.
To take revenge youngsters are becoming terrorists to teach a lessons to these anti nationals.
This man along with his groups should be banned and arrested.
But the Government is supporting these goons because the Government is governed by RSS ( who are the God father for all these criminal terrorists)."

Dont sit at home and think that Duaa is enough...if its true then Allah created Humans when Angles were there already...its a test to all of us

This guy deserves to be beheaded immediately and his daughters to be just kidnapped and treated good, so that he and his followers learn well.

Ya it is true. yogi should be banned from india

seriously, AIMMM dont have any work to do.

what non sense it is,

YA ALLAH save us from Such human devils.
Oh Ummah, please be alert because devils are roaming freely.. because the Word of ALLAH is kept in the SHELF ...
& also
Our prophet said be UNITED
Groups say : Don't UNITE by adding their own version to TRUE ISLAM.
Think which Group is asking U NOT to GET UNITED?
ALL types of devils will run away when we act upon the word of ALLAH...
Lets not be a MUSLIM only by name... We should act as a MUSLIM. U just need to take the step... ALLAH will help U fight such devils in ins & jinns. There is no POWER nor MIGHT except with ALLAH.

one more allegation, what are we. what are we hearing, seriously we common people are not understanding.