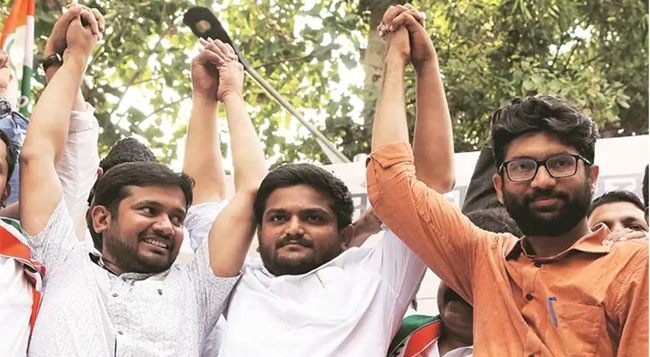 Independent Gujarat MLA Jignesh Mevani announced Saturday that he will join the Congress on September 28 along with former JNU student leader Kanhaiya Kumar — a move that has been in the making, and was confirmed by party leaders in Delhi.

They will join in the Capital, in the presence of Rahul Gandhi and Gujarat Congress working president Hardik Patel. The date has a symbolic value as it is Bhagat Singh’s birth anniversary.

A Dalit leader, Mevani, 41, first emerged along with Hardik and Alpesh Thakore as the youth face challenging the BJP dominance in Gujarat during the 2017 Assembly elections. Kanhaiya, 34, is the firebrand former JNU student union president who caught national attention with speeches against the Modi government, and then went on to unsuccessfully try his hand at electoral politics as a CPI candidate.

However, since then, much water has flowed under the bridge for both leaders — even as the Congress is in rockier waters than before. So, what do the two bring to the party table? The opinion in the grand old party, as usual, is divided. Some leaders dismayingly see in it the Gandhi siblings’ proclivity to lurch towards the Left.

In a brief statement, Mevani, who had won from the reserved Vadgam Assembly seat in north Gujarat in 2017, with the backing of the Congress, said: “On September 28, I will be joining the Indian National Congress along with Kanhaiya Kumar. I have nothing more to say till then.”

Welcoming “all revolutionary leaders willing to work for the country and strengthen the Congress” Saturday, Hardik said they should do so “without worrying about their personal ambitions and challenges”. Calling Mevani “an old friend” while speaking to PTI, he said Mevani’s entry would strengthen the Congress in the state and at the national level.

Hardik’s reference to “personal ambitions” is interesting given his own frustration within the Congress, which he joined in 2019 after leading a successful Patidar agitation against the BJP. In an interview, he had said the state leadership did not give him any work and was trying to “pull me down”.

Apart from the fact that both Kumar and Mevani are fiery speakers, the Congress also has state-specific calculations.

While Mevani was in talks with the Congress much before the BJP changed its entire ministry in Gujarat, the revamp has made his choice even more significant for the party given the new caste dynamics. The BJP’s new chief minister is a Patel, while AAP too is focusing on the community in its foray into the state that goes to polls next year. The Congress strategy seems to be to woo the OBCs and Dalits. Mevani had emerged as the face of the Dalit protests in Gujarat in the wake of the Una flogging incident.

Hardik, who has been trying for the Congress to make him the state chief, is said to have worked behind the scenes for Mevani’s induction.

Many Congress leaders in Gujarat see the move as timely, given the long stasis in the state unit. The party has not been able to appoint an AICC in-charge for Gujarat since Rajiv Satav’s death in May. Party leaders have been pushing for a clear signal to the OBC and Dalit community.

Apart from this, the Congress hopes the entry of Kanhaiya and Mevani will be good optics given the fact that several young leaders — Jyotiraditya Scindia, Sushmita Dev, Jitin Prasada, Priyanka Chaturvedi and Laliteshpati Tripathi – have left the party in the last two years. The first battleground where the party may use the two is Uttar Pradesh.

Poll strategist Prashant Kishor has said that the Bharatiya Janata Party 'is not going anywhere for many decades and the problem with Rahul Gandhi is that he thinks that the BJP will be overthrown by people'.

Kishor said this in Goa on Wednesday and a clip of his Q and A session has been shared on social media.

The statement comes at a time when the Trinamool is spreading itself outside Bengal, and is also proof that the talks of Kishor's entry into the Congress have ended.

He said that the BJP will be at the centre of Indian politics for years, it wins or loses, much like the Congress in the first 40 years after Independence.

"BJP is going to be the centre of Indian polity, whether they win, whether they lose, like it was for the first 40 years for Congress. BJP is going nowhere. Once you secure 30 per cent plus votes at the national level you are not going away in a hurry. So do not ever get into this trap that people are getting angry and they will throw away (Prime Minister Narendra) Modi," he said.

"Maybe they will throw away Modi, but BJP is not going anywhere. They are going to be here, they are to fight it out for the next many decades. It is not going in a hurry," Kishor answered when asked.

He added: "Unless you examine, understand and take cognizance of strength, you will never be able to put a counter to defeat him (BJP & Modi's strength)".

He said the problem with Rahul Gandhi is he does not realise this but thinks people will overthrow the BJP.

Earlier, he had said that the Congress party's fortunes in Uttar Pradesh, which goes to the polls next year, would not be revived despite all the "hype" generated around the Lakhimpur Kheri incident, and the subsequent arrest of party general secretary Priyanka Gandhi Vadra.

"People looking for a quick, spontaneous revival of GOP led opposition based on #LakhimpurKheri incident are setting themselves up for a big disappointment. Unfortunately there are no quick fix solutions to the deep-rooted problems and structural weakness of GOP," Kishor, who played an instrumental role in propelling Mamata Banerjee's Trinamool Congress back to power in the West Bengal Assembly polls held in March-April this year, wrote on Twitter.

The remarks have come amid "strong speculation" that Kishor would join the Congress and the party was deliberating on the issues raised by him.

Even as no one in the party is averse to the idea of Kishor joining the Congress, the party leaders have said that he should not be given sweeping powers regarding elections.The Congress is preparing for the upcoming Assembly elections in Uttar Pradesh along with a few other states which are going to polls next year.

In the politically crucial north Indian state, the Congress is pitted against the ruling Bharatiya Janata Party, Samajwadi Party and the Bahujan Samaj Party.

Karnataka: Schools reopen for class 1 to 5 adhering to covid guidelines

Bengaluru, Oct 25: Schools in Karnataka re-opened for students of classes 1 to 5 from Monday, strictly adhering to Covid-19 related precautions and guidelines. However, several private schools in the city and in different places across the state, have decided to reopen schools for these students only after Deepavali, official sources said.

Several schools had made special arrangements by decorating premises and classrooms to welcome students. "I'm happy to come back to school. I had missed meeting friends, as I could rarely come out of home and there was no school. All these days I used to see teachers teaching on mobile or laptop, now I can see directly," a student of class 4 said with joy.

A teacher said the school has made all the necessary arrangements by following the SOPs issued by the government, and felt happy welcoming children back. With Covid-19 cases declining, Karnataka government in consultation with Covid-19 Technical Advisory Committee (TAC) on October 18 had decided to permit re-opening of schools for students of classes 1 to 5 from October 25, by strictly adhering to Covid-19 appropriate behaviour and SOPs issued by the Department of Primary and Secondary Education.

Parental consent letter for physical classes is mandatory. The government has laid down certain rules such as screening for Covid-19 symptoms on entry, 50 per cent of the capacity in a classroom, provision of hand sanitizers, physical distancing of a minimum of one meter as practically feasible, no crowding, particularly at school entry and exit, and disinfecting classrooms and restrooms daily using 1 per cent sodium hypochlorite solution.

Only teachers and staff who have been vaccinated with two doses of Covid-19 vaccines would be allowed in classes 1 to 5, it had said, there shall be additional use of face shield by teachers who are over 50 years of age.

The daily rise in new coronavirus infections has been below 30,000 for 34 straight days and less than 50,000 daily new cases have been reported for 123 consecutive days.

A decrease of 1,672 cases has been recorded in the active Covid-19 caseload in a span of 24 hours.

The number of people who have recuperated from the disease surged to 3,36,14,434.

The cumulative doses administered in the country so far under the nationwide Covid-19 vaccination drive has exceeded 104.04 crore.