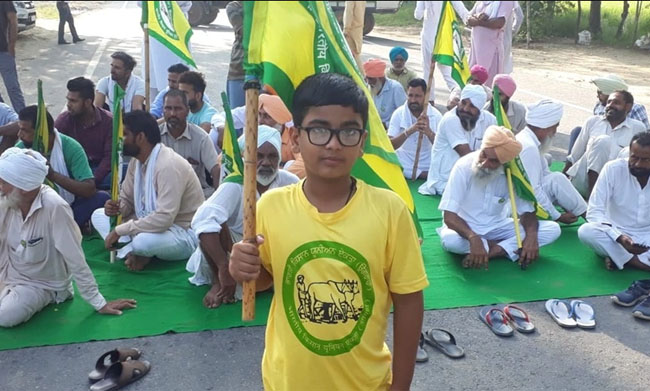 Normal life was hit as farmers blocked highways, roads and squatted on railway tracks at many places in Punjab and Haryana on Monday in view of a "Bharat Bandh" called by farm unions against three agriculture laws of the Centre.

In Punjab, the ruling Congress said it firmly stands by the farm unions' "Bharat Bandh" call against the three contentious laws.

A complete shutdown was observed in the state, with transport services suspended during the bandh period, while shops and other commercial establishments remained shut at most places.

The protesting farmers squatted on railway tracks at many places in the two states.

Ferozepur's Divisional Railway Manager Seema Sharma told PTI that some passenger trains have been cancelled while some other services have been rescheduled.

With the protesters squatting on railway tracks, she said as far as possible, the railway authorities try to halt the trains at a station so that the stranded passengers can get some facilities.

Farmers squatted on railway tracks at many places in the two states, including at Shahbad near Kurukshetra, Sonipat, Bahadurgarh, Charkhi Dadri, Jind, Amritsar, Patiala, Barnala and Lalru near Derabassi.

Several trains were held up due to this.

Phagwara Station Superintendent Devinder Singh said the Amritsar-bound 03005 Up Howrah Mail coming from Kolkata was stopped by the railway authorities at 6.35 am, while the Jammu-bound 08237 UP Begampura Express had to be halted at Phagwara at 6.46 am.

He said though the Begampura Express had no scheduled halt at Phagwara, it had to be stopped due to track blockade near Jalandhar.

At the Karnal railway station, the Swaraj Express train headed to Jammu was halted.

"#I Stand With Farmers & appeal the Union Govt. to repeal the three anti-farmer laws. Our farmers have been struggling for their rights since more than a year & it is high time that their voice is heard. I request the farmers to raise their voice in a peaceful manner," he said in a tweet.

"Punjab Pradesh Congress Committee firmly stands by Farmer Unions demand for Bharat Bandh on 27 Sept 2021. In the war of right and wrong you can not afford to be neutral!! We urge every Congress worker to fight with all their might against the three Unconstitutional Black Laws!!" he tweeted.

Hundreds of farmers blocked the Ambala-Delhi National Highway. They put barricades on the roads leading up to the Shambhu border near Ambala and squatted in the middle of the road. The traffic towards Delhi was diverted to alternative routes.

A large number of trucks and other vehicles were stranded on both sides of the highway.

A number of farmers gathered at the new grain market in Ambala city, from where they marched towards various city markets to request the shopkeepers to keep their shops closed.

Shops also remained shut at some other places in Haryana, including in Karnal and Kurukshetra.

In Amritsar, a large number of farmers held a protest near the Golden Gate, the entry point of the holy city.

The Samyukta Kisan Morcha (SKM), an umbrella body of over 40 farm unions spearheading the agitation, had earlier appealed to people to support the bandh.

The bandh will be held from 6 am to 4 pm during which all government and private offices, educational and other institutions, shops, industries and commercial establishments as well as public events and functions will remain closed or suspended throughout the country, it had said.

All emergency establishments and essential services, including hospitals, medical stores, relief-and-rescue work and people attending to personal emergencies, will be exempted, it had added.

Muslims who migrated to Pak not enjoying much respect, prestige there: Bhagwat

New Delhi, Oct 13: Hindus and Muslims share the same ancestors and if this thought process had persisted at the time of the freedom movement, India's partition could have been stopped, RSS chief Mohan Bhagwat said Tuesday.

He said the Muslims who migrated to Pakistan don't enjoy much respect and prestige there while those who stayed here belong to India irrespective of their methodology of worship.

India's age old culture of Hindutva and Sanatan Dharma is liberal, Bhagwat said, adding, "We inherited this culture and nobody can be differentiated due to their way of worshipping. Our (Hindus and Muslims) ancestors are one. If this thought process had persisted at the time of the freedom movement, there would have been a way to stop Partition."

Bhagwat made these remarks at the launch of a book on Hindutva icon VD Savarkar. He said Savarkar was a nationalist and visionary.

Bhagwat said Savarkar's Hindutva was all about a united India where no one is differentiated on the basis of their religion, caste and status and it was based on the idea of country first.

"Several people talked about Hindutva and unity in the Indian society, it was just that Savarkar spoke about it loudly and now, after so many years, it is being felt that had everyone spoken loudly, no division (of the country) would have happened," he added.

"Muslims who migrated to Pakistan after the partition have no prestige in that country, because they belong to India and it cannot be changed. We have the same ancestors, only our methodology of worship is different and we are all proud of our liberal culture of Sanatan Dharma. That heritage takes us forward, that is why all of us are living here together," Bhagwat said.

He also said whether it is Savarkar''s Hindutva or Vivekananda's Hindutva, all are the same as they all talk about the same cultural nationalism where people are not differentiated on the basis of their ideology.

"Why should we differentiate? We are born in the same country, we fought for it. It is just our methodology to worship god that is different. And different ways to worship god has been our tradition," Bhagwat said.

The RSS chief said it would not be inappropriate to call the current era as "Savarkar''s era as its an era of nationalists".

Bengaluru, Oct 18: The government of Karnataka has decided to ease some Covid-19 requirements at airports.

In an order issued by Chief Secretary P Ravi Kumar, it is stated that SPO2 routine checks (except in cases of fever, cough, cold, difficulty in breathing and so on) would be discontinued.

The government has also decided to “discontinue RT-PCR test report checking on arrival, except for those from selected countries notified by the Government of India, to be conducted at the airport”.

“Instead, there will be mandatory uploading of the RT-PCR report in the Air Suvidha portal by the passenger and checking of the same by the concerned airlines before the boarding of the passenger,” the order states, adding that automated thermal cameras should be used to reorganise the monitoring of passengers.

The relaxations have been ordered based on recommendations of the Technical Advisory Committee (TAC) “after considering consistent decline in the number of daily Covid-19 cases, test positivity rate and overall decline in active cases,” the order states.

The government also permitted swimming pools to reopen at 50 per cent capacity in each batch for only asymptomatic people.

Swimming pools have been closed for everyone except for athletes to train.

The government stated that swimming pools can open at 50 per cent capacity of each batch “with a display of the number allowable at entrance”. Only fully vaccinated persons will be allowed.

All persons should be screened for fever and respiratory symptoms and “only asymptomatics shall be allowed”, the order states.

“After every batch, the restrooms, walkways and other common areas used by the swimmers shall be disinfected using 1 per cent sodium hypochlorite solution,” the government said.