Bhopal continued to shock with a further increase in petrol prices to Rs 104.85 per litre while diesel is priced at Rs 96.05 per litre.

Fuel prices differ from state to state depending on the incidence of local taxes such as VAT and freight charges. The increase in prices is due to a combination of rising international oil prices and central and state taxes.

In the international crude market, oil prices rose on Wednesday, with Brent gaining for a fifth consecutive session, as falling stockpiles and a recovery in demand encouraged investors.

FUEL AND FOOD PRICE AROUND THE WORLD
Due to uncertainty in the recovery of the Covid-19, pandemic, the fuel and food prices would be the highest.
Ramesh Mishra
Victoria, British Columbia, CANADA

The Indian women's hockey team scripted history on Monday by qualifying for the Olympic Games semifinals for the first time, beating three-time champions Australia by a solitary goal here.

A day after the Indian men's team entered the Olympic semifinals following a 49-year gap, the world no. 9 women's side also entered the history books with a phenomenally gritty performance.

Coming into the match, the odds were totally against India as in world no.2 Australia, a mighty unbeaten opponent, awaited them in the last eight round.

But the Indians, determined to prove a point, produced a strong and brave performance to eke out the narrow win over the Hockeyroos.

Drag-flicker Gurjit Kaur rose to the occasion when it mattered and converted India's lone penalty corner in the 22nd minute to surprise the Australians.

India's best performance in the Olympics came way back in the 1980 Moscow Games where they finished fourth out of six teams.

In that edition of the Games, women's hockey made its debut in the Olympics and the sport was played in a round-robin format with top two teams qualifying for the final.

The Rani Rampal-led side will play Argentina in the semifinal on Wednesday. 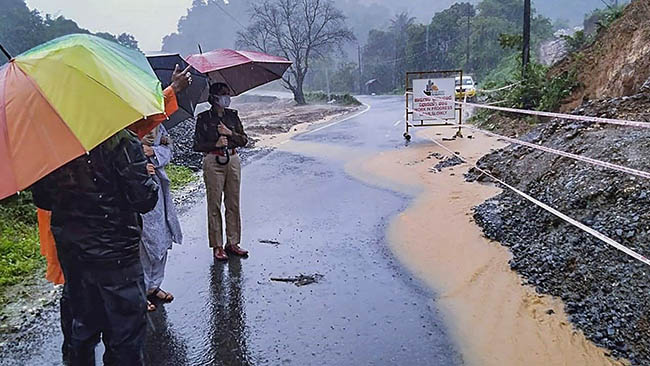 Mangaluru/Bengaluru, July 23: Heavy rains in various parts of Karnataka over the past 24 hours have claimed three lives, led to landslides in eight places and evacuation of about 9,000 people, while the government has sounded a red alert in seven districts.

Chief Minister B S Yediyurappa, who reviewed the flood situation with top officials on Friday, directed all district in charge ministers and MLAs to oversee relief work in their areas.

He said the government would extend all necessary support to relief and rescue efforts and assist farmers who suffered losses due to the untimely rain and hailstorms.

The rivers Krishna, Cauvery, Tungabhadra, Bhima, Kapila (Kabini) and many others in Malnad and coastal Karnataka are in spate, said the KSDMA officer.

Details shared by him showed that 131 villages in 18 Taluks are badly hit, affecting 16,213 people.

While three people lost their lives, two are missing.

The rains damaged 21 houses completely and 804 houses partially. 65 bridges, 10 schools and a primary health centre were damaged, while 291.03 km of roads were washed away.

So far, 8,733 people have been evacuated to safety.

The state has opened 80 relief camps where 4,964 people are staying.

Landslides were reported in eight places, including Virajpet in Kodagu district and Arabail Ghat in Uttara Kannada district.

A red alert has been sounded in Dakshina Kannada, Udupi, Uttara Kannada, Shivamogga, Chikkamagaluru, Hassan and Kodagu districts for the next 24 hours in view of a possible heavy to extremely heavy rainfall and an orange alert, in Belagavi and Dharwad, the officer said.

The rains have also led to filling up of most of the reservoirs in Karnataka, including the Almatti, Bhadra, KRS, Kabini, Harangi, Hemavathi, Narayanapura, Malaprabha and Ghataprabha, he said.

New Delhi, July 23: The budget allocation for National Security Council Secretariat (NSCS) rose 10 times to Rs 333.58 crore in 2017-18 from the previous fiscal with activist-lawyer Prashant Bhushan on Friday claiming that it was the year in which Rs 100 crore was paid to Israeli company NSO which makes the controversial spyware Pegasus.

The NSCS advices the Prime Minister on key strategic and security issues and reports to the National Security Adviser.

Bhushan's remarks came as the country is rocked by the revelation of a leaked database, which claimed that Opposition leaders, journalists activists, law enforcement officials and Constitutional authorities among others were potential targets for surveillance using Pegasus.

"In 2016-17, NSA’s budget was Rs 33.17 crore. Next year the budget increased 10 times to Rs 333 crore because Rs 300 crore was added under new head 'cyber security R&D'. This is the year when NSO was paid Rs 100s of crore for cyber hacking of Opposition, journalists, judges, Election Commissioner, activists using Pegasus! Wow," Bhushan tweeted.

It appears that Bhushan is referring to NSCS as the NSA's budget comes under it.

The allocation rose to Rs 333.58 crore in the next fiscal which was further revised to Rs 168 crore. However, the actual expenditure was only Rs 61.18 crore.