Patna: Bihar Chief Minister Nitish Kumar has called a meeting of all Janata Dal (United) MLAs and MPs on Tuesday, leading to speculation his growing friction with the BJP may come to a head.

Chief among the many reasons why Mr Kumar is upset with the BJP, which is an alliance partner of the Janata Dal (United), or JD(U) in Bihar, has been the BJP-led central government's offer of token representation to allies as Union Ministers.

"There's a conspiracy against me because I'd become union minister," said Mr Singh, a former Indian Administrative Service officer who was once the national president of JD(U). "I'll just say that there's no cure to jealousy," he said while leaving the JD(U) yesterday. "Nitish Kumar will not become Prime Minister in any of his seven lives," he said, describing the JD(U) as a sinking ship.

Mr Kumar reacted by sending out his party's top leaders to respond to allegations by Mr Singh of pettiness and for allegedly dragging his family into a political fight citing illegal property deals.

The JD(U) national president Rajiv Ranjan (Lalan) Singh in a hurry to blunt the attacks by Mr Singh, however, appeared to have overcorrected when he ended up threatening the alliance party BJP.

The sudden increase in outburst of Mr Kumar's aides like Rajiv Ranjan is seen as a calculated move to put pressure on the BJP to concede to the Chief Minister's demands, which includes removal of Bihar assembly Speaker Vijay Kumar Sinha, for whom Nitish Kumar's dislike is an open secret.

The Chief Minister, citing health reasons, had stayed away from a meeting of the government think-tank NITI Aayog in Delhi this weekend, which 23 Chief Ministers including West Bengal's Mamata Banerjee had attended. The absence was seen as yet another show of anger by Mr Kumar at the BJP.

Mr Singh had denied the charge of negotiating directly with the Modi government for a ministerial position in the centre. He said Home Minister Amit Shah had spoken to Mr Kumar about cabinet expansion and offered one berth to the party on the condition that Mr Singh himself become a Union Minister.

Mr Singh also denied the JD(U)'s allegations that there are irregularities in his property deals. "These properties belong to my wife and other dependents, who have been paying due tax since 2010," he said. "I don't know what the party wants to investigate. I have nothing to hide," he said. 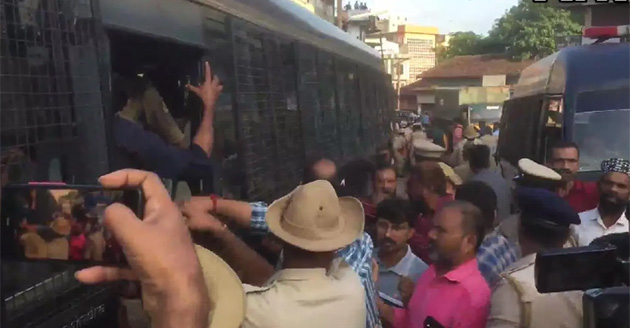 New Delhi, Sept 22: The Popular Front of India on Thursday, while condemning the raids by the National Investigation Agency (NIA) and the Enforcement Directorate (ED) against its leaders, stated that it will "never surrender" and alleged that the agency's claims are aimed at "creating an atmosphere of terror".

A total of 106 Popular Front of India (PFI) cadres were arrested on Thursday in a joint operation conducted by the National Investigation Agency, Enforcement Directorate and state police forces across 11 states in the country's multiple locations, according to the sources.

Issuing a statement against it, PFI's National Executive Council (NEC) said, "NEC has condemned the national wide raids by the NIA and ED and the unjust arrests and the harassments of its National and state leaders across India and the witch-hunting against the members, and supporters of the organization."

"NIA's baseless claims and sensationalism are solely aimed at creating an atmosphere of terror," it added.

It said that the Front will "never ever surrender" on the action taken by a "totalitarian regime".

"Popular Front will never ever surrender on any scary action by a totalitarian regime using the central agencies as its puppets and will stand firm on its will for recovering the democratic system and spirit of the constitution of our beloved country," the statement said.

The searches were conducted at multiple locations in the largest ever investigation process till date. The operation started late in the night around 1 am and learnt to be concluded by 5 am involving over 1,500 personnel of state police, Central Armed Police Forces and officers of NIA and ED.

Several incriminating documents, more than 100 mobile phones, laptops and other materials have been seized by the raiding teams.