Colombo, Aug 6: India buried Sri Lanka under a mountain of runs as they cantered to a comprehensive innings and 53-run victory in the second Test, taking an unassailable 2-0 lead in the three-match series here today. 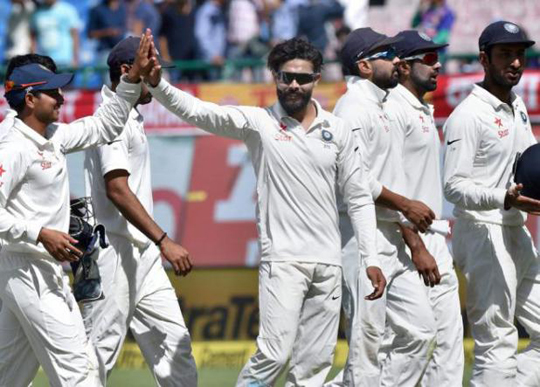 The hosts, who put up their best batting show in the series so far were all-out for 386 in the second innings despite twin centuries from opener Dimuth Karunaratne (141) and No 3 Kusal Mendis (110).

Ravindra Jadeja (5/152 in 39 overs), after an indifferent final two sessions on the third day, found his rhythm and more importantly length back to inflict the maximum damage.

Once Karunaratne and former skipper Angelo Mathews (36) were dismissed by Jadeja within a space of five runs from each other, it was only a matter of time before India clinched the series.

Karunaratne and Mathews added 69 runs for the fifth wicket as Sri Lanka were 310 for four at one stage before a collapse saw the last six wickets going down for 76 runs.

India have now won back-to-back away Test series in the island nation having clinched the previous edition in 2015 by 2-1 margin. Interestingly, Kohli is the only India captain to have won two Test series in Sri Lanka.

The quality, or the lack of it, of the Sri Lankan team will give Virat Kohli and his boys a chance to complete a clean sweep in Pallekele (Kandy), where the the third Test starts on August 12.

Save Bangladesh and Zimbabwe, India have not had a chance to register an all-win record in an away series in any country.

Not a great believer in enforcing follow-on, skipper Kohli said that a lead of 440 runs convinced him to do so.

"The way the wicket behaved and how it was getting worse by the day and the lead of more than 440 prompted us to enforce the follow-on," Kohli said at the post-match presentation ceremony.

While there was turn on offer and the pitch did deteriorate, but Karunaratne and Mendis, during their 191-run second wicket stand last evening, had shown stomach for a fight.

"At the international level, you expect teams to come and play like that (on Mendis and Karunaratne tons). They batted really well. You need to have those tough times to improve as cricketers. If you enjoy the hard moments, you enjoy the good moments as well. Never get complacent as a side - that's important."

However, after Sri Lanka were all out for 183 in the first innings in reply to India's 622, it was always going to be a catch-up game for the hosts.

The Indian bowlers -- especially the two spinners -- were made to work much harder than their previous three innings in the Test matches so far.

Ravichandran Ashwin (2/132 in 37.5 overs), after a good first innings show, did not look half as effective. He, however, got the final wicket of the Sri Lankan second innings to end the match.

In the post-lunch session, it was Jadeja who hit the right areas, extracting sharp turn and bounce off the pitch.

Karunartane, after his 307-ball vigil, got a wicked delivery that jumped off his gloves with Ajinkya Rahane running behind the wicketkeeper to take the catch.

Mathews then got one that had both turn and bounce with Wriddhiman Saha giving a superb exhibition of glovework.

Dilruwan Perera (17) was then stumped as he tried to give Jadeja the charge.
The skipper was effusive in his praise for Saha.

"Four byes on that sort of pitch speaks of his (Saha's) quality. He is definitely the best keeper in this format I will say. How agile he is! He is very safe behind the stumps," Kohli stated.

The ninth five-wicket haul for Jadeja came when Dhananjaya De Silva edged one to Rahane at first-slip.
Niroshan Dickwella (31) threw his bat around before Hardik Pandya (2/31 in 15 overs) accounted for his wicket.

At the start, Karunaratne added 40 runs with nightwatchman Malinda Pushpakumara (16) for the third wicket.

The two continued to stonewall the Indian attack, and a few runs were added too. India struggled to make things happen as they failed to latch on to the half-chances offered by the nightwatchman.

The big moment of the session came in the 66th over when K L Rahul dropped Karunaratne (then on 95) at short leg off Jadeja, which didn't prove costly in the long run.

The opener didn't offer any more chances thereafter, reaching the three-figure mark in 224 balls.
India were then given a lucky break as Pushpakumara played a horrific reverse sweep off Ashwin in the 73rd over and was bowled, gifting his wicket after doing all the hard work.

It became a double blow as Jadeja had Dinesh Chandimal (2) caught at slip in the next over, with Rahane holding on to a sharp catch diving to his right.

The visitors took the second new ball as soon as it became available, but Karunaratne and Mathews played watchful cricket given the vitality of this passage of play.

India did bring on its pacers, Mohammed Shami (0-27) and Umesh Yadav (1-39), for short spells with the new ball, but they were unable to provide breakthroughs.

Sri Lanka crossed the 300-mark in the 90th over, with Karunaratne and Mathews bringing up their 50-partnership off 71 balls.

"We were outplayed with bat and the ball in the first innings. But I was happy with the way we played in the second innings. We just want to take positives from this game. Kusal and Dimuth played some really good cricket," Sri Lanka captain Chandimal said.

Hat-trick for Mamata in West Bengal as TMC crushes opponents 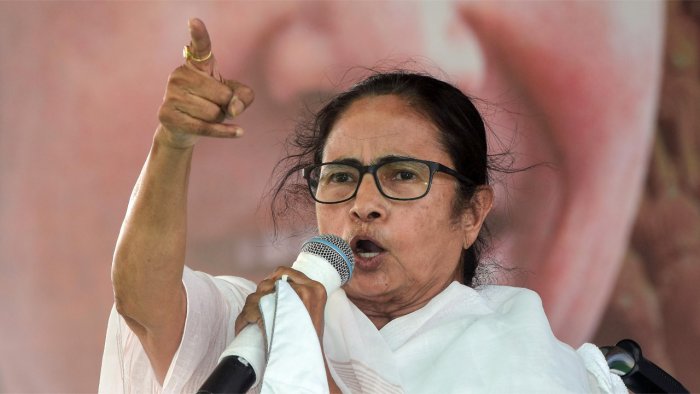 May 2: The Trinamool Congress (TMC) seems to be heading towards a thumping victory with over 200 seats in the West Bengal Assembly elections if the ongoing trends hold. BJP on the other hand is likely to face disappointment as till now the party is far behind its declared target of 200 seats.

The TMC is leading in 209 seats, the BJP in 80 seats, the alliance of the Left Front, Congress and the ISF is leading in only two seats after several rounds of counting. Others are leading in one seat. Out of the 294 seats in West Bengal, polls were held in 292 seats as two candidates in two seats died due to Covid-19 and polls there were postponed.

Her trusted lieutenant and Urban Development Minister Firhad Hakim has also secured a comfortable lead from the Kolkata Port constituency.

Suspension of IPL - an Overdue Decision

The IPL is being suspended now in the wake of several players testing positive for COVID. This occurred despite the prior claims of the bio bubbles being an effective way to prevent transmission.

Despite many accusation of insensitivity, the BCCI were content to let the IPL go on until this development. This is despite the massive COVID crisis India is suffering through.

As Indians on social media clamored for help due to the lack of beds and oxygen in the hospitals in the middle of the pandemic, names of cricketers fill the headlines. The IPL has always been a massive event in India. However, in the wake of a global health crisis that required the 2020 Olympics to be postponed, the fact that the IPL was conducted comes as a shock.

Several cricketers withdrew from playing this year. Their reasons ranged from having relatives who have tested positive, being wary of putting their vulnerable loved ones at risk, fear of being unable to return home as international airport ban travelers from India etc. However, several big names still lent their support to the IPL being conducted mid-pandemic among players and patrons alike. Notably, there is Jay Shah, BCCI Secretary and son of the Home Minister, Amit Shah. A senior Indian cricket board official had told Reuters that the IPL must go on as it lifts spirits in times of such negativity.

This of course, is a gross oversimplification as cricket does give entertainment, it is also a group sport. Despite claims of being extensive in taking precautionary measures, multiple players are now infected, and everyone who has interacted with the players have been exposed to the virus.

This raises the question whether the BCCI will rethink its statements regarding T20. The BCCI had priorly stated that T20 would be conducted. They added that in case they are unable to conduct T20 in India due to COVID, their plan B is to have it hosted in UAE, rather than cancelling the event.

While the BCCI’s move to conduct the IPL can be considered disgraceful, the reactions to the same were not much better. Media houses, too, rushed at the opportunity of giving news coverage to the IPL. Several people like Faye Dsouza and Rana Ayyub are using social media to shed light on the severity of the COVID situation in India. This includes posting videos of crematoriums etc. that are not getting covered by mainstream media. Amidst this, big media houses seemed to be content in highlighting cricket.

The New Indian Express stood out among other reputed media houses in India.  They posted an announcement from the Editor stating that they will not be covering the IPL as they disagree with it being held in the midst of such a tragic time.

Each match so far has been extensively covered by several media houses. Meanwhile, the SC had to give specific orders to stop booking people for asking for help finding oxygen, beds or medicine in the wake of scores of cases of the same occurring in UP, Maharashtra and Haryana.

There is no doubt that the move to suspend the IPL was a wise one, but the timing of it is still questionable. It seems as though to the IPL organizers and player, the issue that is causing people to die in thousands in the country did not matter until it reached their arena. It is also dubious to the ethics of news to have media houses covering cricket at this time.

While ‘to entertain’ may be one of the functions of the news, it seems as though ‘to inform’ and ‘to educate’ have taken a backseat.