Mangaluru, July 10: Eid Al-Adha will be celebrated in coastal Karnataka on Wednesday, July 21, as the crescent of Dul Hijjah was not sighted on Saturday evening in the region.

Qadhis of Dakshina Kannada and Udupi have made this announcement.

Dul Hijjah, which this year begins on July 12, is the month during which the Hajj pilgrimage takes place and is the last month of the Islamic calendar.

Pilgrims’ tents at Arafat, as well as facilities in Mina and other areas where pilgrims will stay in Muzdalifah have all been inspected. The Kingdom announced online registration for pilgrims, which began on June 13,  had closed, with 60,000 people from within the Kingdom qualifying after meeting the requirements. 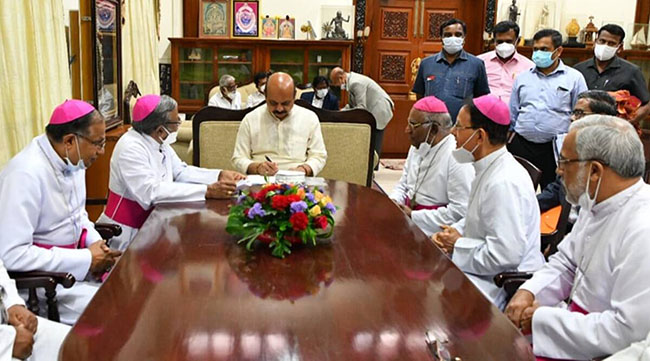 Bengaluru, Sep 23: A delegation of Catholic bishops of Karnataka, led by Archbishop of Bangalore Reverend Peter Machado, met Chief Minister Basavaraj Bommai to voice their opinion over a proposed law to ban religious conversions in the state.

They also spoke about a host of other topics, including inclusion of representatives of Christian managements in committees formed to implement the new National Education Policy (NEP).

In a statement issued here on Thursday said Machado said they had expressed displeasure over recent allegations against the community, terming it “malicious” and “untrue”. The Archbishop of Bangalore Archdiocese highlighted that hundreds of schools, colleges, and hospitals were operated under the aegis of each bishop. “There are about a lakh students but none have been advised to get converted to Christianity. Some minor events might have taken place which have been blown out of proportion now,” he added.

While speaking about the need for an anti-conversion Bill in the Assembly, Hosadurga BJP MLA Goolihatti Shekhar had recently claimed that religious conversions were “rampant” across the state. The MLA had also said 15,000 to 20,000 people, including his own mother, were converted to Christianity in his constituency.

When asked about the same, Machado said, “Someone is trying to malign us. While the issue is being debated in the Assembly, we have reminded people not to do such things. It is not right if someone approaches people, hands over the book and a cross, and converts them. We, too, have a conscience and moral responsibility. We are not forcing anyone.”

In a memorandum submitted to the CM on Wednesday said the bishops noted that such a law would lead to “unnecessary communal issues and unrest” with many more controversial statements and reactions made following the same.

The memorandum also noted the need to include representation from Christian managements in the NEP implementation committees. “Even though thousands of educational institutions are being managed by members from the community, we would like to bring to your notice that there is no Christian representation in various committees formed to implement NEP,” the letter read.

The bishops also urged Bommai to establish a Christian Development Board under the government to ensure their welfare and address demands made by the community on various fronts.

Bengaluru, Sept 22: Opposition Leader Siddaramaiah on Wednesday said the BJP government in the state has indulged in a loot by giving government land to RSS-run Chanakya University at a throwaway price.

Also, there are no provisions under which the government land could be given to a private university, Siddaramaiah said. "Therefore, the land given to Chanakya University is illegal," he said.

The government Tuesday had passed the bill amidst chaos after it was tabled by Higher Education Minister Dr Ashwath Narayan in the assembly to allow Chanakya University to be set up in 116 acres in the Aerospace Park near Devanahalli.

If the government does not act, the party would take legal action to seek withdrawal of land granted for the setting up of Chanakya University.

He also alleged that the Speaker Vishveshwar Heggade Kageri did not allow a debate in the assembly over the matter and the bill was passed hurriedly.

"What is the reason for passing the bill hurriedly. Is the government under RSS pressure," he questioned. It also amounts to favoritism, he added.

Siddaramaiah also flayed the Speaker for taking side of the government when it is required of him to be neutral sitting in a chair sanctified by the Indian Constitution. "His conduct in the assembly yesterday was not impartial," he added.

Kageri had said that there is a need to encourage institutions that promote Indian cultural values in an era where education is highly westernised.

Siddaramaiah alleged that the government is making efforts to impart Manuvadi education to children with an intention of "reestablishing" caste hierarchy as per Manuvad system.

Yesterday, Chief Minister Basavaraj Bommai justified the allocation of land to Chanakya University since similar concessions were given to industries to create jobs.

The government will also give concessions to organisations who give good education to the children by keeping their future in mind, he said.