Mangaluru, Nov 24: The anti-corruption bureau (ACB) today launched simultaneous search operations in as many as 60 places across Karnataka targeting 15 government officials of various departments on charges of disproportionate assets.

The ACB sleuths are conducting search operations in houses, offices and relatives' houses of these officials.

ACB officials have registered cases against all 15 officials under the prevention of corruption charges. After obtaining a search warrant from the court, raids have been carried out at 60 places in Karnataka. As many as 8 Superintendent of Police (SP), 100 officials, 300 personnel of ACB have been involved in these search operations collecting details about property transactions, movable and immovable property details, bank transactions, jewellery and automobiles details.

Mangaluru, Aug 2: JD(S) leader and former chief minister H D Kumaraswamy said he would stage a satyagraha if the culprits of three murders are not arrested by August 5.

He was speaking to reporters after visiting the families of murder victims Masood, Praveen Nettaru and Mohammed Fazil in Dakshina Kannada district.

He sought to know what Chief Minister Basavaraj Bommai achieved with his visit to the district.

“Instead of bridging the gap between communities, he has increased the gap by visiting the house of only one victim. We had expected him to instil confidence among the people. The chief minister should have visited all the families and instilled confidence in the community. Whom are you (CM) trying to appease ?” he said.

Kumaraswamy said that two national parties were playing with the emotions of people.

“As a result, the gap between Hindus and Muslims has increased. Here, the children of politicians and ministers have not been murdered. It is the children of the poor who are murdered,” he added. Kumaraswamy handed over cheques for Rs 5 lakh to the families of each victim.

Mangaluru, Aug 1: A 30-year-old man was arrested on charge of sexually assaulting college student after chasing away her male friend at NITK beach in Surathkal on the outskirts of the city.

The accused has been identified as Munaz, a fish lorry driver by profession.

The incident took place on July 27 when the girl, studying in a college in city had been to the beach with her classmate.

The accused allegedly captured the duo’s movements in his mobile and started blackmailing them that he would leak the video.

According to the victim, he also threatened the boy and forced him to leave the place and then sexually assaulted her.

A complaint was lodged with the women's police station and the accused Munaz arrested under Section 376 of IPC. 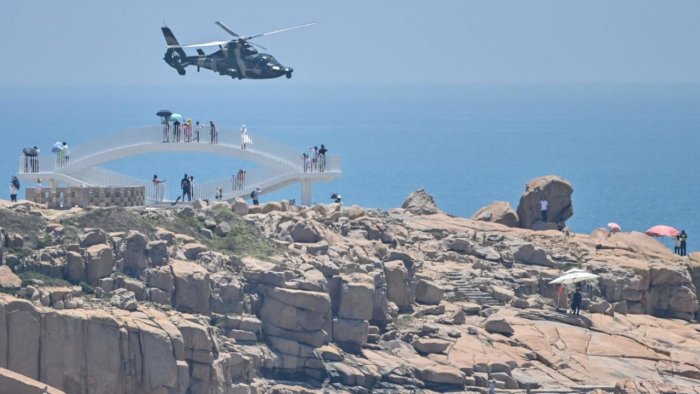 China's People's Liberation Army has begun biggest-ever military exercises including live firing on the waters and in the airspace surrounding the island of Taiwan following US politician Nancy Pelosi's visit.

Taiwan said China was trying to change the status quo in the region.

Ms Pelosi made a brief but controversial visit to Taiwan, which China regards as a breakaway province.

The drills are Beijing's main response, although it has also blocked some trade with the island.

The exercises are due to take place in busy waterways and will include long-range live ammunition shooting, Beijing says.

Taiwan says it amounts to a sea and air blockade while the US said the drills were irresponsible and could spiral out of control.

Analyst Bonnie Lin told the BBC that the Taiwanese military would react cautiously but there was still a risk of confrontation.

"For example, if China decides to fly planes over Taiwan's airspace, there is a chance that Taiwan might try to intercept them. And we could see a mid air collision, we could see a lot of different scenarios playing out," she said.

Taiwan said it scrambled jets to warn off Chinese warplanes on Wednesday and its military fired flares to drive away unidentified aircraft over the Kinmen islands, located close to the mainland.

Taiwan has also asked ships to take different routes and is negotiating with Japan and the Philippines to find alternative aviation routes.

Japan has also expressed concern to China over the areas covered by the military drills, which it says overlaps with its exclusive economic zone (EEZ).

On Wednesday, China detained a suspected Taiwanese separatist in the coastal Zhejiang province on suspicion of endangering national security, according to local media reports.

Meanwhile China's Ambassador to France Lu Shaye told French TV that after "reunification" with Taiwan, Beijing would focus on "re-education".

China has previously used the term "re-education" to refer to its detention of mostly-Muslim minorities in its north-western Xinjiang region, where human rights groups say more than a million people have been incarcerated.