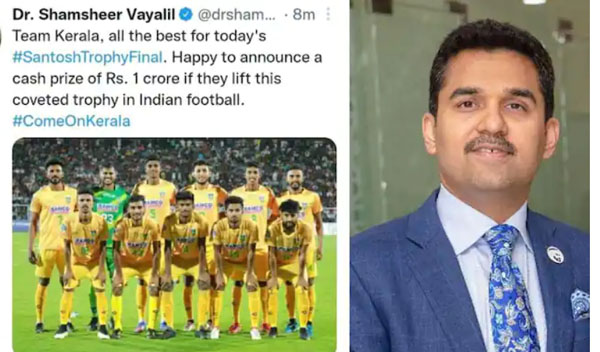 Dr Shamsheer, chairman and managing director of VPS Healthcare, tweeted that he will offer Kerala football team a cash prize of Rs1 crore (more than Dh480,000) if they lift the trophy.

Kerala is set to meet heavyweights West Bengal in a highly anticipated contest at the Manjeri Payyanad Stadium in Malappuram district of Kerala today evening.

Dr Shamsheer, a sports enthusiast, is hoping the announcement would be a morale booster for the Kerala team, looking to win their seventh title.

“As a fellow Malayali, it’s heartening to watch Kerala playing the final of the Santosh Trophy. The team has displayed fantastic performances throughout the tournament. I hope they will be able to lift one of the most coveted trophies in Indian football,” said Dr Shamsheer.

The match between the two Indian powerhouses: Kerala and West Bengal is expected to be a high-octane clash. In the group stages of the tournament, Kerala had defeated West Bengal 2-0.

However, 32-times champion West Bengal are looking to avenge their 2017 final loss to Kerala at the Salt Lake Stadium, when they were defeated in the tiebreakers.

Earlier, Dr Shamsheer had earlier given a cash prize of Rs1 crore to the Indian hockey goalkeeper P.R. Sreejesh, who hails from Kerala and played a key role in India winning the historic bronze medal at the Tokyo Olympics.