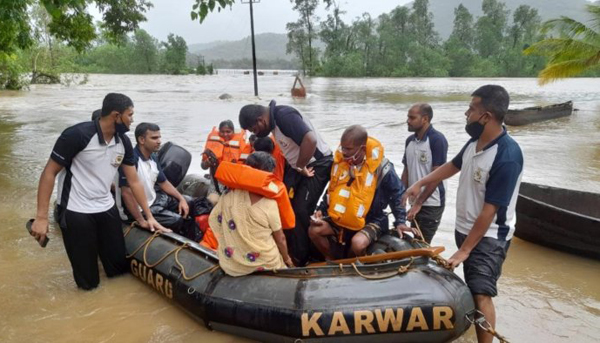 According to a Coast Guard release, units were kept on standby for rescue and providing relief to marooned and stranded people.

The rescue operation was part of Humanitarian Assistance and Disaster Relief (HADR) with each team consisting of seven to nine Coast guard personnel was formed and deployed in the flood-affected region of Kadra, Unglijoog Island and Kharegoog Island of Uttar Kannada, it said.

The statement added that a team one rescued a total of 90 people from Khargejoog village while the rescue team two rescued 10 from Bodojoog island in association with the state administration.

In this early morning operation, 23 stranded personnel were rescued and engaged for the relief operation, the statement said.

Meanwhile, the Karnataka State Natural Disaster Monitoring Centre (KSNDMC) said that this is the first time that more than 500 mm of rainfall has been recorded in the state.

The Ankola-Dongri stretch in Uttara Kannada witnessed 541 mm of rainfall in 24 hours between July 22 and July 23.

In the same duration, 42 TMC of water was added in 13 major reservoirs of the state.

According to the KSNDMC officials, a total of 18 taluks across six districts have reported notable damages. A total of 8,733 persons living in low-lying and vulnerable areas have been shifted by respective district administrations. A total of 4,964 persons residing in Uttara Kannada (3,066), Shivamogga (8) and Belagavi (1,890) districts have taken refuge in 80 relief camps.

Price rise is not a ‘real problem’ of citizens; protesters are conspirators: Karnataka Minister

“Everybody knows why the prices are rising. But, there’s politics taking place on this. Real gas users aren’t on the streets. Politicians are on the streets to do their political drama. Nobody is really facing a problem. This is a political conspiracy. There’s no real problem,” Gowda told reporters.

Gowda’s statement came at a time when the ruling BJP is on the defensive over the hike in the price of domestic liquified petroleum gas (LPG) cylinders.

“Who gave gas to every household? It is PM Modi who gave facilities for women who were suffering from burning eyes and noses,” Gowda said. “Petrol and gas [prices] are flexible. They go up and down at once. This happened under the Congress’ rule also. It’s temporary,” he said.

Mangaluru, Sept 5: The coastal district of Dakshina Kannada, which shares its border with Kerala, has recorded 130 fatalities in August, making it the district with highest number of deaths in the state for the said month.

One in every five Covid deaths in Karnataka has occurred in Dakshina Kannada in August. The district, in its defence, said 29 of those deaths were of patients from other districts, which if taken into account, the coastal district would still tie with the state capital on the districts with most number of deaths for the month.

Dr Ashok H, Covid nodal officer for Dakshina Kannada district, said that the positivity rate over the past seven days in the district has dropped to 2.04 per cent and case fatality rate to 1.43 per cent.

"Out of 2,248 active cases, 1,486 (66.1 per cent), are in home isolation, 544 (24.2 per cent) in hospitals and 218 (9.7 per cent) in Covid Care Centres. The reason for higher hospitalisation rate compared to other districts is that we are admitting nursing and paramedical students, who are testing positive, who don't have severe symptoms, to hospitals so that they compulsorily remain isolated," he said.

"We have 32 paramedical and eight medical colleges. We got clusters from there when we screened 7,000-odd students. Sullia also had 8 per cent positivity rate previously for one month but now has only 145 active cases," he added.

Now the focus is on Beltangady taluk which has the next highest active cases with 296.

"Deaths are high because medical colleges like Yenepoya are getting referrals from other districts under Ayushman Bharat-Arogya Karnataka. Earlier we would send them back to their districts but now with the centralised bed management system, deaths of patients from other districts occurring in Mangaluru are being recorded as Dakshina Kannada district's deaths," Dr Ashok said.