Mangaluru, Jul 19: A fire broke out at SSLC examination centre here at Hira School at Babbukatte near Thokkottu on the outskirts of the city.

All students were evacuated from the center on time by the officials of the school and no casualties or injuries were reported during the incident.

Arrangements were made in adjacent building for the students to write exams.

The fire is suspected to have caused due to an electric short circuit at the lab of school. 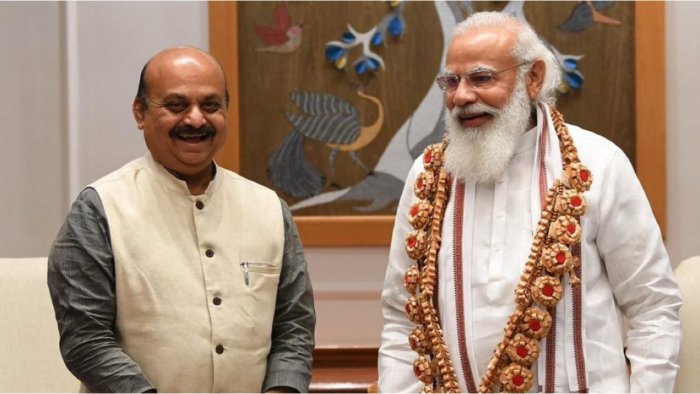 Bommai, who is on his first visit to Delhi after becoming the chief minister, met Modi at his residence.

He also hosted a lunch for MPs from the state at Hotel Ashoka.

Bommai, who was elected as the new leader of the BJP legislature party on Tuesday, following B S Yediyurappa's resignation, took oath as the chief minister on Wednesday.

Mangaluru, Aug 2: A small group of commuters from Kasaragod district staged a demonstration at the interstate border at Talapady on the outskirts of Mangaluru city today to register their protest against the fresh entry restrictions implemented by Dakshina Kannada.

The district administration of Dakshina Kannada had strengthened the border surveillance following the rise in Covid-19 cases in Kerala.

Accordingly, only those with covid-19 negative reports were allowed to enter Dakshina Kannada from Monday.

Meanwhile, students from Kerala studying in various colleges coming under Mangalore University jurisdiction who had their UG exams were allowed to enter the district by showing their hall tickets.

Others, who did not have RT-PCR negative reports, were sent back from the border.

Following this, a group of people from Kerala staged a protest at Talapady and demanded that people should be allowed to enter Karnataka based on their vaccination status.

However, that arrangement was also stopped on Monday. This led to tension at the border after people from Kerala opposed the move and held a protest.

They demanded that those who have received two doses of vaccines too should be allowed to enter Dakshina Kannada.

Dakshina Kannada has been witnessing spike Covid-19 cases in the past few days. On Sunday, the district had recorded the most daily cases in Karnataka. 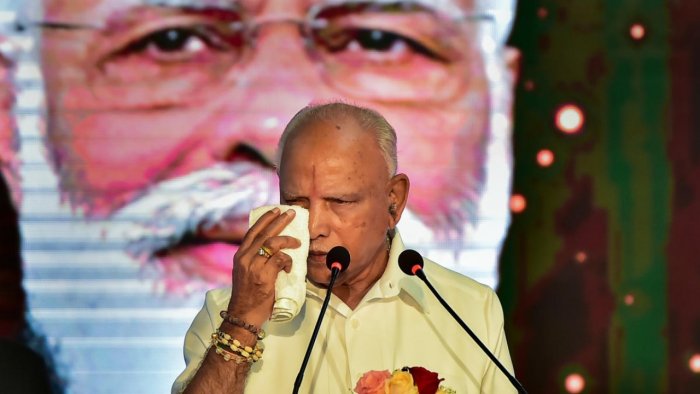 Bengaluru, July 26: There seems to be no "closure" for B S Yediyurappa, the BJP's "comeback man" in Karnataka, as he could never complete a full term in office, despite becoming the Chief Minister four times, surmounting odds.

It's also too early to write a political obituary of the 78-year old Lingayat strongman and the 24X7 politician, the face of the party in the State for decades.

From the humdrum existence as a government clerk and a hardware store owner to becoming the chief minister four times, Yediyurappa has navigated the choppy waters of politics with the consummate ease of a seasoned oarsman.

In a repeat of sorts, it is a "cut short" tenure for the rarely smiling and ever grim-looking Yediyurappa as he is stepping down less than two years ahead of the end of the current tenure, ascending to power, exactly two years ago after a murky legal battle and weeks of political drama.

For the architect of the BJP's first ever government to the south of Vindhyas, age is being seen as a primary factor for his exit from the top job, with an unwritten rule in the BJP of keeping out those above 75 years from elective offices; also the high command wants to make way for the fresh leadership, ahead of the Assembly polls, likely by mid-2023.

Among the other reasons that might have contributed to his exit include rumblings within the party with complaints about his "authoritative" style of functioning, his younger son and state BJP Vice President B Y Vijayendra's alleged interference in the administration, and allegations of corruption.

Yediyurappa's tenure as Chief Minister includes seven days during his first term in November 2007; three years and two months from May 2008; for three days in May 2018, following the Assembly polls, which was his third term; and finally for exactly two years since July 26, 2019, his fourth tenure.

Fondly called "Raja Huli" (King Tiger) by his followers, he joined the RSS when he was barely 15, and cut his political teeth in the Jana Sangh, the BJP's forerunner, in his hometown Shikaripura in Shivamogga district.

He became the Jana Sangh's Shikaripura taluk chief in the early 1970s.

Yediyurappa, who began his electoral politics as Purasabha president in Shikaripura, was first elected to the Legislative Assembly from Shikaripura in 1983 and went on to win eight times from there.

Widely credited for BJP's growth in Karnataka, along with being party's state unit president, he has also served as opposition Leader in the Legislative Assembly, member of Legislative Council, as also member of parliament.

A Bachelor of Arts, he was jailed during the Emergency, worked as a clerk in the social welfare department before taking up a similar job at a rice mill in Shikaripura before he set up his hardware shop in Shivamogga.

He married Maitradevi, daughter of the rice mill owner, where he worked, on March 5, 1967 and has two sons and three daughters.

His elder son B Y Raghavendra is a MP from Shivamogga Lok Sabha constituency.

Always seen in his trademark white safari suit, according to those close to him, he had keen interest in watching Kannada movies.

Yediyurappa is also seen as BJP's only leader with a "mass leader" stature in South India, and wields considerable influence over the Veerashaiva-Lingayat community, which is estimated to form about 16 per cent of the states population, and is considered to be the BJPs core support base in the state.

He could have landed in the hot seat in 2004 when the BJP emerged as the single largest party, but the Congress and JD(S) of former prime minister H D Deve Gowda formed an alliance, and a government was formed under Dharam Singh.

Known for his political acumen, Yediyurappa joined hands with H D Kumaraswamy, Deve Gowda's son, in 2006 and brought down the Dharam Singh government.

Under a rotational chief ministership arrangement, Kumaraswamy became the CM and Yediyurappa his deputy.

Yediyurappa became CM for the first time in November 2007 but his term lasted just seven days as Kumaraswamy reneged on a power sharing pact and walked out of the alliance.

He became the chief minister once again after the BJP came to power in May 2008 but had to step down in July 2011 following his indictment by the then Lokayukta N Santosh Hegde in an illegal mining case.

In the 2008 polls, Yediyurappa had led the party to victory, and the first BJP government in the south was formed under him, with the help of "Operation Kamala" (Operation Lotus)- an alleged attempt of the BJP to engineer defection of opposition legislators to ensure the stability of the government.

On October 15, 2011, he surrendered before the Lokayukta court after it issued a warrant against him in connection with alleged land scams, and was in jail for a week.

Sulking after having been made to quit, Yediyurappa broke his decades-long association with the BJP and formed the Karnataka Janata Paksha. However, ploughing a lonely furrow, he failed to make the KJP a force to reckon with in state politics but wrecked the BJP's chances of retaining power in the 2013 polls, winning six seats and polling about 10 per cent votes.

As Yediyurappa faced an uncertain future and the BJP looked for a leader with a formidable reputation to lend its campaign the required heft ahead of the 2014 Lok Sabha polls, the two cosied up to each other, leading to the KJP's merger with the BJP on January 9, 2014.

In the Lok Sabha election, the BJP won 19 of the state's 28 seats, a remarkable turnaround for the party which had secured only 19.9 per cent votes in the Assembly polls just a year ago leading to the fall of its first government.

Notwithstanding the corruption taint, Yediyurappa's status and clout grew in the BJP.

On October 26, 2016, he got a huge relief when a special CBI court acquitted him, his two sons and son-in-law in a Rs 40 crore illegal mining case, which had cost him the chief ministership in 2011.

In January 2016, the Karnataka High Court quashed all 15 FIRs against Yediyurappa lodged by Lokayukta police under the Prevention of Corruption Act.

In April that year, he was appointed the state BJP chief for the fourth time.

The Lingayat leader, however, continued to be dogged by controversies, with some cases against him still pending before courts.

The BJP declared him its chief ministerial candidate in the 2018 assembly polls, ignoring the taunts by the Congress.

As the polls threw up a hung verdict, with no party getting a clear majority in the 225-member House (including Speaker), the Governor invited Yediyurappa, the leader of the single largest party, to form the government and gave him 15 days to prove the majority.

However,the Supreme Court asked him to prove the majority in the House within 24 hours following a plea by the Congress-JD(S) challenging the Governor's decision to invite the BJP to form the government.

The three-day-old BJP government collapsed on May 19, 2018, minutes before the scheduled trust vote, with him resigning in a tame anti-climax and hours later Kumaraswamy, the chief ministerial candidate of the newly formed JD(S)- Congress alliance, was invited to form the government.

In the next over one year period, the BJP under Yediyurappa managed to keep the coalition government on tenterhooks as the ruling combine constantly feared poaching of MLAs.

In its best ever performance the BJP also won 25 out of 28 Lok Sabha seats in 2019 parliamentary polls.

The resignation of 17 rebel Congress-JD(S) MLAs came as a blow to the alliance and it collapsed, losing the trust vote on July 23, 2019, paving the way for his return.

Determined to regain the reins of power, amid uncertainties about his political future with growing age, Yediyurappa is said to have played a key role in engineering the defection of the 17 Congress-JD(S) rebels.

Sixteen of them had subsequently joined the BJP.

He ensured that most of them won the bypolls in December that year on a BJP ticket, and 12 are currently Ministers in his Cabinet, as promised.

Though in the last two years, BJP won most of the bye-elections under Yediyurappa's leadership, repeated floods, alleged shortcomings in Covid management and growing disgruntlement within the party and the government, threw challenges to administration.

With growing age and strong central leadership, his declining sway over the party and administration, marred his final tenure, bringing him the criticism of being a "weak CM" from the Opposition parties.