'Azaan' as noise pollution; it disturbs my sleep everyday: Vice-Chancellor of Allahabad University 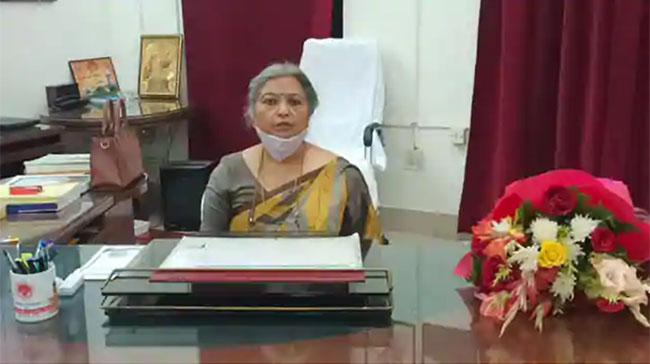 Allahabad, Mar 17: The vice-chancellor of Allahabad University, a Central university, triggered a controversy after she virtually termed the 'azaan' (a call from the mosques for prayers at prescribed times) as "noise pollution" and said it disturbed her sleep.

Professor Sangeeta Srivastava, the VC of the varsity, in a letter entitled "Noise Pollution in Civil Lines" to the district magistrate, said she was not against any religion but any religious practice must not disturb others.

"Every day in the morning at about 5.30 am, my sleep is disturbed due to loud azaan done on the mike by the maulvi in the surrounding mosque...even before the Eid, they announce Seheri (breakfast before Roza) at 4 am...the sleep so disturbed does not resume even after trying very hard...this also results in headache throughout the day," she said in the letter.

She quoted an adage that "your freedom ends where my nose begins" and said that the 'azaan' might be recited without the mikes.

Prof Srivastava also referred to some judgements of the Supreme Court regarding permissible sound levels.

According to the sources, the police have asked the mosque custodian to keep the sound levels within the permissible limits.

Sources said the mikes of the mosque facing the direction in which the house of the VC was situated has been turned off.

However, the letter triggered sharp reactions from the Muslim clerics, who referred to the 'Bhajan-Kirtans' and 'Aartis' in the temples to question the VC.

In 10 days, 102 covid patients died before reaching hospital in Karnataka

Bengaluru, Apr 28: As many as 102 of the 1,437 Covid-19 patients who died between April 17 and 26 in Karnataka either passed away in their homes or were brought dead to hospitals.

While 75 patients died at home, 27 were pronounced dead on arrival in hospitals as per the daily bulletin issued by the health and family welfare department. This means at least 10 Covid-19 patients have died every day in the 10-day period without availing medical help.

Most of these fatalities were recorded in Bengaluru. Lack of beds, a long wait for test results and Bengaluru Urban numbers to secure admission in hospitals and ignoring symptoms until the last minute are some reasons for this grave situation. Health department officials also point to the absence of effective monitoring of people in home isolation.

In many cases, Covid tests are being conducted postmortem. On Monday alone, 21 Covid patients died at home, as per the bulletin.

The health department’s bulletin on Tuesday revealed four were brought dead to hospitals although no one died at home.

Soumya Reddy, Jayanagar (Bengaluru) MLA, alleged that the number of people dying at home due to Covid-19 complications is much higher than what is being revealed in the state government bulletin.

“We get numerous calls from patients’ families asking for beds and ventilators,” Reddy said. “In some cases, they return home after unsuccessfully trying for a bed and die at home. We recently came across one such case in Jayanagar, where a 35-yearold man died on April 20 after searching for a bed in a private hospital. He visited a local PHC too,” Reddy said.

The man’s family had sought the MLA’s help to transport the body to a crematorium. A Bruhat Bengaluru Mahanagara Palike (BBMP) ambulance eventually arrived at the dead man’s home at 8pm on April 21 — almost 24 hours later. The family, which resides in JP Nagar First Phase, was unavailable for comment. The man’s death certificate states he was Covid-19 positive and died of cardiopulmonary arrest.

On April 22, a 17-year-old boy was brought dead to a hospital in Bengaluru. He had no comorbidities. The boy was diagnosed with influenza-like-illness and turned out to be Covid positive.

Dr Ravindra Mehta, pulmonologist and member of BBMP’s expert committee, said the increase in the number of people dying at home is expected, as the condition of a certain percentage of patients will deteriorate.

“Some patients recover with antiviral medicine while in other cases they recover with oxygen, anticoagulants and steroids,” said Dr Mehta. “Some patients will have complications related to comorbidities and cytokine storms. The deaths at home that we are seeing are of those not getting hospital beds because of the current surge.”

Dr Mehta went on to say that medical teams monitoring patients in home isolation must immediately ensure they are admitted to hospitals as soon as their conditions begin to deteriorate.

Gaurav Gupta, BBMP chief commissioner, said cases of death at home and brought dead to hospital are due to Covid-aggravated conditions and delayed detection. “They rush to hospitals at the last minute. Most of the tertiary hospitals in Karnataka are located in Bengaluru so patients from all over the state, who are in acute distress, come here,” Gupta said. 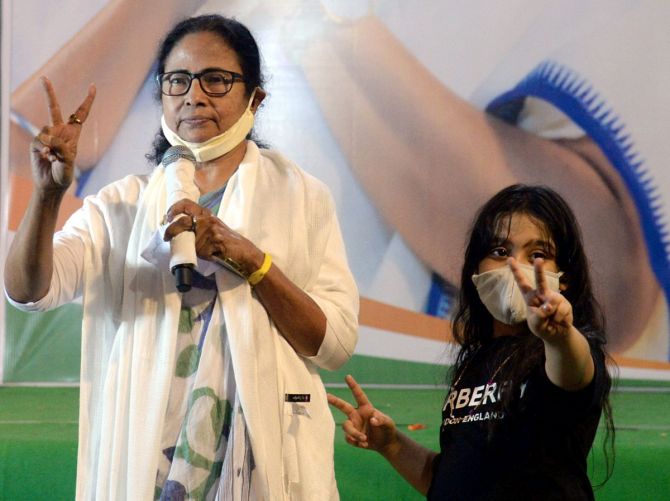 She's the soldier, she the commander and she the army.

The victory for Banerjee, by far the biggest mass leader since the redoubtable Jyoti Basu who ruled West Bengal with an iron fist from 1977 to 2000, will not only help fortify her position in the state but also enhance her standing at the national level where voices from the opposition are getting feeble with time.

A masterful practitioner of modern-day politics, she has wielded considerable influence beyond her own state, in the corridors of power in New Delhi, for a long time, sewing up alliances with both the Congress and the BJP.

Since leading thousands of hungry, half-clad and angry farmers on the dusty streets of Singur and Nandigram over a decade ago, she ruled the state virtually unchallenged for eight years before the BJP vastly extended its influence and won 18 of the state's 42 Lok Sabha seats in 2019.

For the 66-year-old spinster, the political journey from the restive alleys of Nandigram and Singur in 2007-08, when she waged a relentless battle against the Left Front government, to 'Nabanna', the seat of power in Kolkata, was as captivating as it was punishing.

Although she cut her teeth in politics as a young Congress volunteer in her student days and rose to become a minister in UPA and NDA governments, it was in the crucible of Nandigram and Singur movements against forcible acquisition of farm land by the Communist government for industrialisation that her destiny and that of the TMC took shape.

She founded the TMC in January 1998 after parting ways with the Congress and it was through struggles, big and small, against the Communist dispensation that her party grew.

In 2001, when the state had its first assembly polls after the launch of the TMC, the party bagged an impressive 60 seats in the 294-member House, while the Left Front clinched a staggering 192.

In its second outing in the 2006 assembly elections, the TMC's strength came down by half as it could pocket only 30 seats, while the Left scored a resounding victory with 219.

The four years that followed were the most momentous in the contemporary political history of West Bengal as she put up a spirited fight against the Left Front government over alleged excesses in Singur and Nandigram.

The assembly elections of 2011 were historic, as she decimated the Left in one of its longest-standing bastions. Banerjee's party ended the Left Front's 34-year unbroken stint in power, winning a whopping 184 seats, riding a massive public outrage against the communists, who were restricted to just 60 seats. It was then the longest-serving democratically elected communist government in the world.

But power has many pitfalls and rising aspirations is one of them. A string of influential TMC leaders including Suvendu Adhikari, the MLA from Nandigram and a minister, deserted Banerjee and joined the BJP.

She rose through the Congress ranks rapidly and was called a giant slayer when she defeated CPI-M heavyweight Somnath Chatterjee in Jadavpur in the 1994 Lok Sabha elections held in the aftermath of the then prime minister Indira Gandhi's assassination.

She lost the seat to Malini Bhattacharya in 1989, when an anti-Congress wave swept the country after the Bofors scandal came to light, the only time she lost an election.

As Minister of State for Sports in the P V Narasimha Rao government, the quick tempered leader announced her resignation and held a rally in Kolkata's Brigade Parade Ground against what she believed was government's neglect of sports. She was divested of all her portfolios including Women and Child Welfare and Human Resource Development in 1993.

In 1996, she accused the Congress of behaving like a "stooge" of the Left and founded the Trinamool Congress in 1998.

She joined the NDA in 1999 and was appointed the railway minister in Atal Bihari Vajpayee government, and launched new trains and rail projects in West Bengal.

Banerjee quit the NDA in 2001 in the aftermath of the Tehelka expose, which brought under cloud several ministers in the Vajpayee government, and aligned with the Congress again the same year.

She contested the Lok Sabha elections in 2004 as part of the NDA and her party lost badly. She was the lone Lok Sabha MP of the TMC from West Bengal.

In 2006, the TMC fared abysmally in the state assembly elections.

Before the 2009 Lok Sabha polls, she joined the Congress-led UPA and the alliance won 26 of the state's 42 seats. She was beck as the railway minister.

Singur and Nandigram became emblematic of mass resistance against the communist rulers, and in 2011 assembly elections, the TMC won a landslide. The TMC-Congress-SUCI alliance won 227 of the 294 seats.

After being sworn in as the chief minister on May 20, 2011, one of the first decisions of her government was to return 400 acres of land acquired by the governent for Tata Motors Nano project to the farmers. The Tatas had already exited Singur.

Banerjee launched a slew of welfare projects in health and education sector and for empowerment of women, and tried to strengthen the law and order machinery by setting up police commissionerates in Howrah, Bidhannagar, Barrackpore and Durgapur-Asansol.

The BJP, rapidly expanding its influence in the state at the Left's expense, accused her of minority appeasement after she instituted a stipend for thousands of imams and muezzins of mosques. The Kolkata High Court called it unconstitutional and stopped payment.

She earned the BJP's wrath when she banned the immersion of Durga idols in October 2016 till after observation of Muharram by Muslims.

Ministers in the Banerjee government and key TMC leaders got embroiled in the Saradha and Rose Valley chit fund scam cases. Quite a few were jailed.

Though these allegations indeed chip away at Banerjee's popularity reflected in the BJP's impressive showing in the 2019 Lok Sabha polls, nothing stuck in the assembly elections.

'Didi' became the real 'Dada' as she got past the post, on a wheelchair and a foot in cast, a souvenir from the Nandigram battle against former protege-turned-rival Suvendu Adhikari.

Officials said on Saturday that the passenger identified as Abdul Raheem Eriyal Jafar, hailing from Po Kudlu, Kasargod, Kerala, landed at Adani Mangalore International Airport on Friday night and he was taken into custody.

The accused had concealed the mercury coated gold strips in Kitchenware, Gas lighters, MP3 Player and Earphone carried in checked in baggage.