Riyadh, Jun 20: Saudi Arabia will end a nationwide curfew and lift restrictions on businesses from Sunday morning after three months of lockdown to curb the spread of coronavirus, state news agency SPA quoted a source in the interior ministry as saying on Saturday.

The curfew will be lifted as of 6 AM local time on Sunday. Restrictions will remain, however, for religious pilgrimages, international travel and social gatherings of more than 50 people.

The kingdom introduced stringent measures to curb the spread of the novel coronavirus in March, including 24-hour curfews on most towns and cities.

In May, it announced a three-phase plan to ease restrictions on movement and travel, culminating in the curfew completely ending on June 21.

The number of coronavirus infections has risen in recent weeks following a relaxation of movement and travel restrictions on May 28.

The kingdom has recorded 154,223 cases of COVID-19 and a total of 1,230 deaths, the highest in the six-nation Gulf Cooperation Council.

Saudi Arabia plans to limit numbers at the annual haj pilgrimage to prevent a further outbreak of coronavirus cases, sources familiar with the matter told Reuters earlier this month.

Some 2.5 million pilgrims visit the holiest sites of Islam in Mecca and Medina for the week-long haj, a once-in-a-lifetime duty for every able-bodied Muslim who can afford it. Saudi Arabia asked Muslims in March to put haj plans on hold and suspended the umrah pilgrimage until further notice.

Measures include mandatory tracking devices for passengers, including golden and silver visa holders said a new safety decision circular issued by the authority. The stringent regulations apply to all aircraft operators conducting flights from and to the UAE and the following countries – Bangladesh, Democratic Republic of Congo, India, Nepal, Nigeria, Pakistan, Uganda, South Africa, Sri Lanka, Vietnam, and Zambia.

The circular, a copy of which Khaleej Times has seen, said, “The current development on the Covid-19 pandemic leads the UAE to impose new flight and passengers’ restrictions. The UAE government is closely monitoring the situation and will provide further updates and instructions as necessary.” An official with GCAA also confirmed to Khaleej Times that the circular has been issued by the civil aviation authority. It is said that passengers need to wear the device for at least ten days.

He added, “A majority of our customers are from the sub-continent. Since the suspension was announced on April 24, we’ve had approximately 800 businesspersons and families travel to UAE with us.”

The circular said passengers are subject to the required public health protocol upon arrival and any Naturalization and Residency department conditions, they must wear a monitoring and tracking device, comply with a ten-day quarantine period; and complete a PCR test upon arrival followed by two other PCR tests on the fourth and eighth day of their quarantine period.

The rules are also applicable to crew members operating from countries mentioned in the safety decision. Additionally, passengers are to immediately quarantine in a hotel during the whole transit period, and their movement is limited to the required movement between the hotel and the airport without contacting persons of the UAE community, said the circular.

Babu also stated that the approvals process from GCAA have been made extremely stringent to ensure Covid-19 safety. The circular also stated all arrivals are subject to the Immigration conditions in the UAE and the approval of the National Emergency Crisis and Disasters Management Authority (NCMEA) must be obtained for unscheduled and charter flights.

Dubai eases travel restrictions for passengers from India - What are the conditions now?

Dubai, June 19: The government of Dubai in the UAE Saturday announced relaxation of travel restrictions from countries including India. The UAE, in late April, had closed its borders for travellers from India. This had come in the backdrop of the surge in number of Covid-19 cases in India during the second wave of the pandemic.

What are the conditions?

The Dubai government has relaxed restrictions for travel from India, Nigeria and South Africa with effect from June 23. With regard to travel from India, only passengers with a valid residence visa who have received two doses of a UAE-approved vaccine, are allowed to travel to Dubai. There are four vaccines approved by the UAE government — Sinopharm, Pfizer-BioNTech, Sputnik V and Oxford-AstraZeneca.

Eligible passengers travelling from India to Dubai should also present a negative test certificate from an RT-PCR test taken 48 hours before departure; UAE nationals are exempted from this requirement. Furthermore, passengers travelling to Dubai from India are required to undergo a rapid PCR test four hours prior to departure to Dubai. They must also undergo another RT-PCR test on arrival in Dubai. In addition, following arrival, passengers from India should undergo institutional quarantine until they receive their PCR test result, which is expected within 24 hours. UAE citizens and diplomats are exempted from institutional quarantine. Notably, only QR-coded negative PCR test certificates are accepted.

>> Entry will be permitted to residents who have received two doses of UAE-approved vaccines.

>> All travellers are also required to present a negative Covid-19 test result taken within 48 hours before departure; UAE citizens are exempted.

>> All passengers must take a rapid PCR test 4 hours prior to flight departure.

>> All passengers must undergo a PCR test on arrival at Dubai Airport.

>> Passengers should undergo institutional quarantine until they receive their PCR test result, which is expected within 24 hours. UAE citizens and diplomats are exempted. 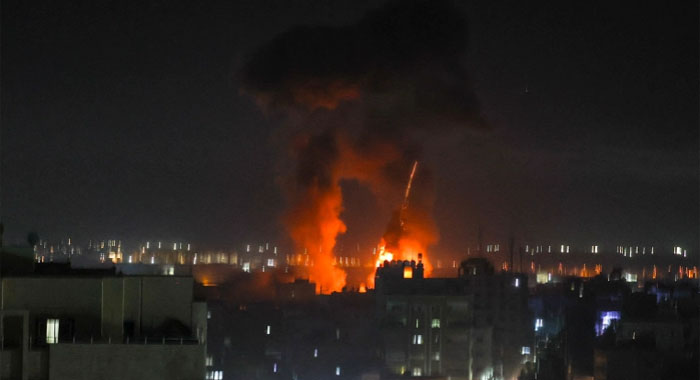 Israel has launched fresh air raids on the Gaza Strip after Palestinian groups in the besieged enclave sent incendiary balloons into southern Israel.

The raids early on Wednesday, June 16, come less than a month after Israel’s 11-day bombardment of Gaza in May and followed a march in East Jerusalem by Jewish nationalists that drew Palestinian condemnation and anger.

The Israeli military said its aircraft attacked Hamas compounds in Gaza City and the southern town of Khan Younis and said it was “ready for all scenarios, including renewed fighting in the face of continued terrorist acts emanating from Gaza”.

The raids, the military said, came in response to the launching of the balloons, which caused 20 blazes in open fields in communities near the Gaza border.

A Hamas spokesman, confirming the Israeli attacks, told the Reuters news agency that Palestinians would continue to pursue their “brave resistance and defend their rights and sacred sites” in Jerusalem.

It was not immediately clear if there were casualties in Gaza as a result of the bombings.

Al Jazeera’s Safwat al-Kahlout, reporting from Gaza, said Palestinian fighters said they had no orders from their commanders to respond to the latest raids.

He also noted that Hamas had not mentioned retaliation or a response to the attacks in their statement confirming the Israeli bombardment.

The Israeli raids were also the first on Gaza since a new coalition government, headed by right-wing nationalist Naftali Bennett, took power over the weekend, ending Benjamin Netanyahu’s 12-year run as prime minister.

The new government on Monday approved a “provocative” march by Israeli far-right nationalists and pro-settler groups through occupied East Jerusalem. Thousands of people, waving flags and some chanting “Death to Arabs” paraded in East Jerusalem on Tuesday, drawing anger and condemnation from Palestinians.

In another anti-Arab chant, the Israeli demonstrators also yelled: “May your village burn.”

In a scathing condemnation on Twitter, Foreign Minister Yair Lapid said those shouting racist slogans were “a disgrace to the Israeli people,” adding: “The fact that there are radicals for whom the Israeli flag represents hatred and racism is abominable and unforgivable.”

The so-called “March of the Flags” marks the anniversary of Israel’s 1967 occupation of the city’s eastern part, and came as tensions remain high over Israel’s planned forced displacement of Palestinian families from the neighbourhood of Sheikh Jarrah.

In advance of the march, Israeli police forcibly removed dozens of Palestinians from outside the Old City’s Damascus Gate.

At least 17 Palestinians were arrested and 33 others were wounded as Israeli police fired stun grenades in the surrounding areas of Damascus Gate.