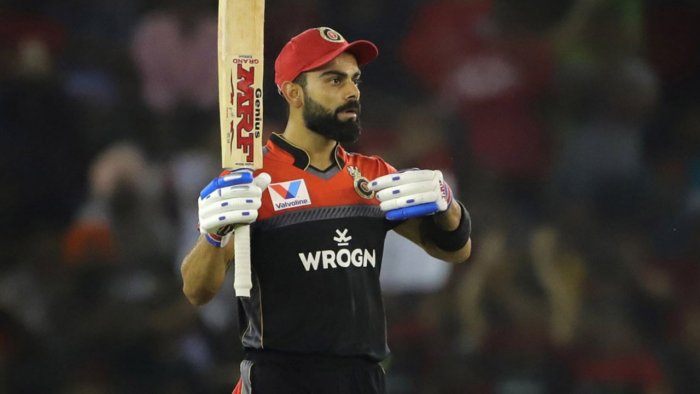 The Royal Challengers Bangalore beat the SunRisers Hyderabad by six runs on Thursday at the MA Chidambaram Stadium in Chennai. The win consolidated RCB's position at the top of the IPL points table with two wins from two matches.

Virat Kohli, tactically astute leading RCB during SRH's chase, however, endured a difficult time with the bat in hand.

Opening the innings, Kohli managed to score only 33 runs from 29 balls at a low strike rate of 113.79. Just when he was looking to free his arms and accelerate the innings, he top-edged a good length ball off Jason Holder in the 13th over and Vijay Shankar took a sharp catch to send the RCB captain back to the dugout.

On his way back to the dugout, a visibly disappointed and fuming Kohli smashed the boundary rope with his bat, thereby breaking the IPL's Code of Conduct. He also hit an empty chair near the dugout and has been reprimanded for these actions by match referee Narayanan Kutty.

An IPL statement said, "Royal Challengers Bangalore captain Virat Kohli has been reprimanded for breaching the VIVO Indian Premier League’s Code of Conduct during his team’s match against Sunrisers Hyderabad at the MA Chidambaram Stadium, Chennai. Mr Kohli admitted to the Level 1 offence 2.2 of the IPL’s Code of Conduct. For Level 1 breaches of the Code of Conduct, the Match Referee’s decision is final and binding."

Even though RCB managed to score only 149 on a turning Chennai pitch, it eventually proved to be enough as SRH, who needed 35 to win from four overs with eight wickets left, imploded dramatically to finish at 143.

"To be very honest, we are not overexcited with wins this season. We have plans. We traded Harshal (Patel) from Delhi, gave him a specific role and he's doing a great job," Kohli said at the post-match presentation.

"I told the guys: 'Don't think that we struggled to get to 149. If it was tough for us, it will be tough for them as well.' Our execution under pressure was spot on. It kept getting tougher and tougher with the old ball. I think Maxi's innings was the difference for us," he added.

Bengaluru, Apr 28: Amid surging Covid-19 cases in the State, Karnataka Revenue Minister R Ashoka claimed on Wednesday most infected people have switched off their phones and about 3,000 of them who have gone 'missing' from Bengaluru are spreading the disease. Police have been asked to trace them, the minister told reporters.

"We are giving free medicines to the people, which can control 90 per cent of cases, but they have (Covid infected people) switched off their mobile phones. They reach the hospital in a critical stage to desperately look for the ICU beds.This is what is happening now," Ashoka said.

He said most of those infected with Covid-19 have switched off their phones and are not letting people know about their whereabouts, which is making things difficult.

"I feel that at least 2,000 to 3,000 people in Bengaluru have switched off their phones and left their houses.We don't know where they have gone," the minister added.

Appealing to the infected people to keep their phones switched on, Ashoka said police have been asked to track them.

"I pray to them with folded hands that Covid cases will only increase due to this (behaviour). It is wrong when you reach for ICU beds at the last moment," the minister said.

The government has imposed a lockdown for 14 days restricting unnecessary movement of people starting from Tuesday night to contain Covid cases, which is rising at an alarming proportion.

More than 30,000 fresh Covid-19 cases were reported on Tuesday including over 17,000 in Bengaluru, while the active cases have exceeded three lakh in the state of which two lakh are in the state capital. 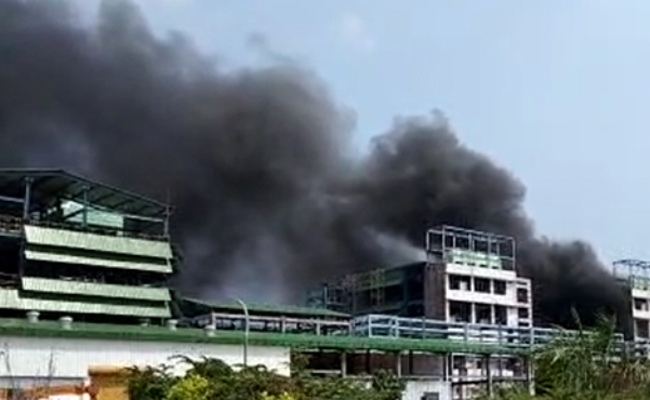 Mangaluru, Apr 24: A powerful explosion at Catasynth Specialty Chemicals under the jurisdiction of MSEZ limited in Permude area on the outskirts of the city today triggered panic among the local residents.

No casualties were reported. The exact reason behind the explosion is not yet known.

Thick smoke could be seen billowing out of the building following the explosion. Petroleum by-products are processed in this company.

Yediyurappa was undergoing treatment in hospital as he was infected with the coronavirus on April 16, the second time in nine months. He was discharged earlier today six days after being tested covid positive.

Yediyurappa, 78, is likely to remain home for the next couple of days following the advice of doctors.

“I’m doing alright. I’ve called a meeting of ministers at 4 pm at home,” Yediyurappa told reporters. “Directions are being issued on what they need to do in the districts. I’ve been in constant touch with my chief secretary P Ravi Kumar, the law minister and others on the situation,” he said.

“The situation is deteriorating with each passing day. In every house, 3-4 people are infected,” Yediyurappa said.

“I request people with folded hands: Don’t step out of your homes unnecessarily. This is deteriorating the situation and we’ve reached a stage where things have become uncontrollable,” he said, and stressed on the importance of wearing masks, sanitizing and keeping physical distance. “There’s no other way to stop Covid.”

The government had taken strict measures already, he said, referring to the weekend curfew. “Don’t make the police take action. I request citizens to cooperate.”