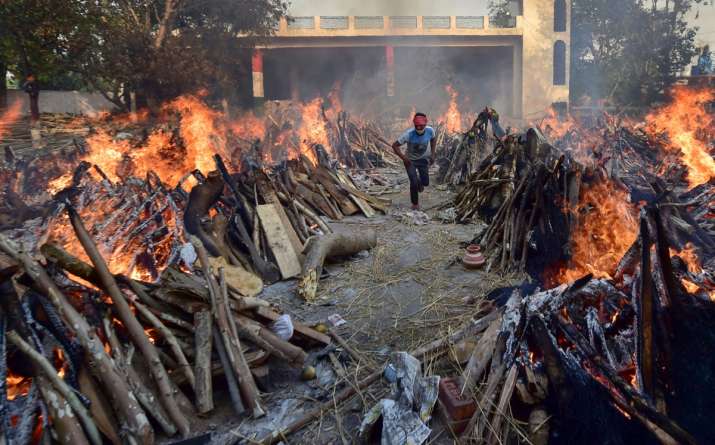 This is man made problem.
We(You) paid very dearly as the consequences of choosing our governments.
At least learn from this UNFORGETTABLE LESSON, what type of party and leaders you have to select for ruling.

costly lesson, never ever forget and pass it to all generations until end of the planet.

New Delhi, June 4: Fuel prices were hiked after a two-day pause, with petrol in Mumbai now nearing the Rs 101-mark.

Petrol prices were hiked by 27 paise, while the price of diesel has been increased by 28 paise.

In the country's financial capital, petrol now costs Rs 100.98 per litre, while diesel is currently at Rs 92.99 per litre. In the national capital, a litre of petrol is worth Rs 94.76 and diesel costs Rs 85.66 per litre.

Bengaluru, June 15: A dangerous new Covid-19 variant that is potentially resistant to certain drugs has been found in Karnataka and other states with experts stressing the need for close monitoring of the situation.

Research suggests that the new variant, which is officially designated B.1.617.2.1 (or alternatively as AY.1) was first spotted in India on April 5.

Since then and up to May 15, seven additional sequences were identified in five other states, besides one from Karnataka.

According to experts, the increased mobility of people in March and April prior to the lockdown imposed on April 27, could have triggered the mutation, especially as it is a derivative of the B.1.617.2 “Delta” variant which experts already blame for driving the second wave.

Speaking as an independent authority, associate professor Amit Singh, head, Centre for Infectious Disease Research, Indian Institute of Science (IISc), said the larger the scale of the infections, the more opportunity for a virus to add a “gain of function” mutation.

“This is a mutation which gives a typical virus increased transmissibility, virulence, immunogenicity,” he said.

Well known virologist Dr V Ravi, who is also the chairman of the state’s Genomic Surveillance Committee, said that there was precedent to show that previous variants of the novel coronaviruses obtained same mutations independently across various geographic regions.

Dr Vishal Rao, also a member of the Committee, said that the state does not know how many of the sequences are coming from airline passengers of the ongoing “air bubble” international flights and how many are coming from hospitals.

“There is no data. We also need to get clinical correlation by monitoring ICUs and hospitals to find out what the genomic pattern and behavior is. We are not keeping our ears to the ground,” he said.

What is known is that the sequences have been found in states which reported some of the highest incidences of Covid-19 cases in the second wave: Karnataka, Maharashtra, Andhra Pradesh, Gujarat and Tamil Nadu. Odisha also found one sequence.

At the same time, the number of Delta+ sequences being found in India are increasing. Up to June 11, six sequences had been made public. This rose to seven on June 13 and finally to eight on Monday.

Some 158 sequences of the Delta+ have been found across 11 countries to date: Nepal, Portugal, Poland, Switzerland, Japan, Russia, Turkey, the UK, the US and Canada. The first global cases were found on March 29.

What makes Delta+ a concern is that it has picked up a key new mutation in the S protein according to scientists at Delhi’s CSIR-Institute of Genomics and Integrative Biology. This allows it to evade an immune response. The new variant is also potentially resistant to monoclonal antibody cocktail, which has been hailed as a cure.

Lucknow, June 13: A woman was allegedly gangraped while she was undergoing treatment at a government hospital in the state capital of Lucknow.

The daughter of the 40-year-old victim, a resident of Uttar Pradesh's Amethi district, told Union Minister Smriti Irani, who represents the constituency in Lok Sabha, that her mother had told her that she had been 'gang-raped and 'assaulted' by the staff at Ram Manohar Lohia Hospital in Lucknow.

While the officials ordered a probe into the matter after Irani's intervention, the victim died late on Saturday night while being shifted to another hospital in Lucknow.

The daughter of the victim said that her mother had been admitted to Ram Manohar Lohia Institute of Medical Sciences on June 7 after being referred from the district hospital in Amethi.

''I was not allowed to meet my mother by the staff... after much persuasion, I met her a few days later and found her in a critical condition... she told me then that she had been gangraped and beaten by the staff,'' she said.

The victim was discharged on Friday without assigning any reason even though she was still unconscious, she further alleged.

Officials informed that a committee has been formed to investigate the allegations.

The Lohia hospital management, however, refuted the allegations and said that no such complaint was lodged with it by the daughter of the victim.

The incident comes close on the heels of another alleged gang rape with a patient inside the operation theatre of a hospital in Prayagraj.