Golwalkar being honoured by Ministry of Culture

During the struggle for India’s independence while the majority of Hindus, Muslims and people of all religions followed the path of Mahatma Gandhi, secular democratic nationalism, there were few whose origins were in the ideology of the declining sections of ‘Landlord-clergy’ alliance. They not only opposed the freedom movement but also played a supporting role to British policy of ‘Divide and Rule’, which led to partition of the country. They believed nationalism based on religion’s identity. While one such stream Muslim nationalism’s dominant elements went to Pakistan, the Hindu nationalist stream gradually became more powerful in India and today it rules the roost. Not only its progeny BJP is the ruling dispensation, other organizations floated by it are effectively propagating its sectarian nationalism.

As the matters stand the ruling party, though it swears by the Constitution which is secular, plural and wants a federal structure, its politics is leading the country in a direction as outlined by the agenda of RSS. This dichotomy between a secular plural constitution and RSS agenda of Hindu nationalism does come to one’s notice times and over again. On 19th February this year (2021) a tweet from Ministry of culture paid respect to the major ideologue of RSS, M.S. Golwalkar, “Remembering a great thinker, scholar, and remarkable leader #MSGolwalkar on his birth anniversary. His thoughts will remain a source of inspiration & continue to guide generations. @prahladspatel @secycultureGOI @PMOIndia @PIBCulture @pspoffice,” The leaders of ruling party did not oppose it as most of them have been trained in the ideological contributions of Golwalkar.

He was at the helm of affairs of RSS from 1940 to 1973 and outlined its ideology in two books, ‘We or Our Nationhood defined’ (We) (1940) and ‘Bunch of thoughts’ (1966). His ideology is totally opposite to the values of freedom movement. Freedom movement and the parallel process of India in the making of India were based on diversity of religions. Muslims were equal contributors to the anti British struggle. In contrast Golwalkar puts forward the ideal of Nazi Germany and its treatment of Jews as something to be emulated. In ‘We’ he went on to write “… Germany shocked the world by her purging the country of the Semitic races, the Jews. National pride at its highest has been manifested here…a good lesson for us in Hindustan to learn and profit by."  (We…, 1938, p.37) and further  "… non-Hindu people in Hindustan must either adopt the Hindu culture and language, must learn to respect and revere Hindu religion, must entertain no idea but the glorification of Hindu nation i.e. they must not only give up their attitude of intolerance and ingratitude towards this land and its age long traditions, but must also cultivate the positive attitude of love and devotion instead; in one word, they must cease to be foreigners or may stay in the country wholly subordinated to the Hindu nation, claiming nothing, deserving no privileges, for less any preferential treatment, not even the citizen's rights." (Ibid p.52).

Same thing was worded in cleverer form in ‘Bunch…’ “It would be suicidal to delude ourselves into believing that they have turned patriot overnight after the creation of Pakistan. On the contrary, Muslim menace has increased a hundredfold by the creation of Pakistan, which has become a springboard for all their future aggressive designs on our country." (Bunch of Thoughts, Bangalore, 1996, p. 177-78)

While freedom movement was anti British, RSS totally kept aloof from freedom movement, its justification was that “"The theories of territorial nationalism and of common danger, which formed the basis of our concept of nation, had deprived us of the positive and inspiring content of our real Hindu Nationhood and made many of the 'freedom movements' virtually anti-British movements. Anti Britishism was equated with patriotism and nationalism. This reactionary view has had disastrous effects upon the entire course of freedom movement…" (Bunch of thoughts, 1996, p.138). In tune with this he dissuaded those who wanted to join the Quit India movement and instructed the organization to continue its regular work and not to do anything which will put British into discomfort.

Indian as a nation in the making was a process in which abolition of birth based hierarchy of caste and gender was integral to the process. Golwalkar was totally supporting the caste, Varna system stating that it has worked so well for our community. In Bunch of thoughts he says, ““Castes there were in those ancient times too, continuing for thousands of years of our glorious national life. There is nowhere any instance of its having hampered the progress or disrupted the unity of society. It, in fact, served as a great bond of social cohesion.” On similar lines he praised Lord Manu as the greatest ever Law giver of society, contrary to this it was Ambedkar who burnt Manu Smriti to posit his ideology of ‘Annihilation of caste’.

Another social transformation which came up during freedom movement was the participation of women in the anti-colonial movement, in taking up modern education as the baby steps towards gender equality. Golwalkar, as the ideologue trying to bring forth the social relationships of bygone era, the subjugation of women, upholds the same in ‘Bunch of thoughts’ in the context of affirmative action for women. States he “There is now a clamour for ‘equality for women’ and their ‘emancipation from man’s domination’! Reservation of seats in various positions of power is being claimed on the basis of their separate sex, thus adding one more ‘ism’— ‘sexism!’ — to the array of casteism, communalism, linguism, etc.”

His ideology led him to the opposition to federal structure of the country, which took in to consideration the deepening of democratic process and also respecting the local diversities.  In contrast to the federal structure outlined in our Constitution he advocated single state of a unitary type. What we are witnessing currently, the concentration of power in the hands of center and emergences of a supreme leader indicates to the actualization of what he advocated.

There is an attempt to disown his book ‘We…” as its formulations are very blunt and go against the electoral interests of ruling party. One can just say that one of the earlier Sarsanghchalak of RSS, Rajendra Singh, in an affidavit indicted that it is this book which outlines the ideology of RSS, “"With a view to give a scientific base to propagate the idea-India being historically from time immemorial a Hindu nation-the late Shri M.S. Golwalkar had written a book entitled 'We or Our Nationhood defined', which was published in 1938." (Quoted in Islam, Undoing India: The RSS way)

What a sorry plight for our secular democracy that the prophet of sectarian nationalism; one supporting caste system; upholding secondary position of women; regarding Muslims and Christians as foreigners is being upheld by the ruling dispensation. The best reply to this tweet was again from a tweet by the previous Secretary of same ministry. Former culture Secretary Jawhar Sircar responded: “As former culture secretary, I hang my head in shame to see RSS chief Golwalkar being falsely praised by @MinOfCultureGoI. Golwalkar & RSS opposed Gandhi’s Freedom Struggle. In his Bunch of Thoughts, Golwalkar opposed India’s tricolour too. Sardar Patel jailed him, banned the RSS.”

We need to strive to uphold the values of Indian Constitution if we want progress in the direction envisaged by those who strove and contributed to the process of “India as the Nation in the making”. 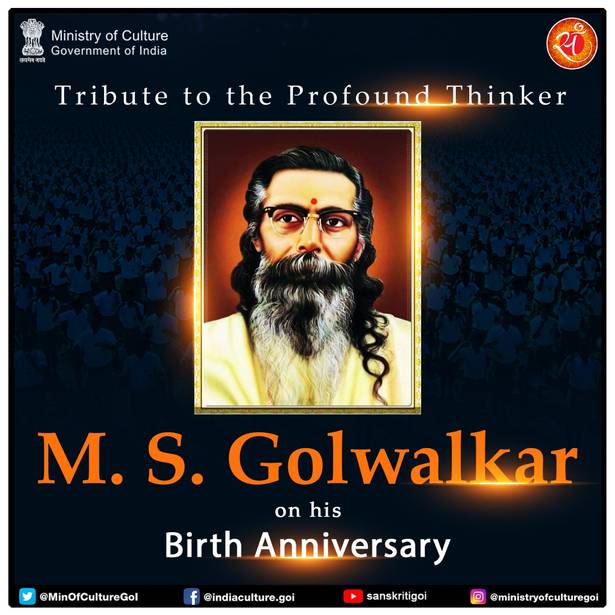