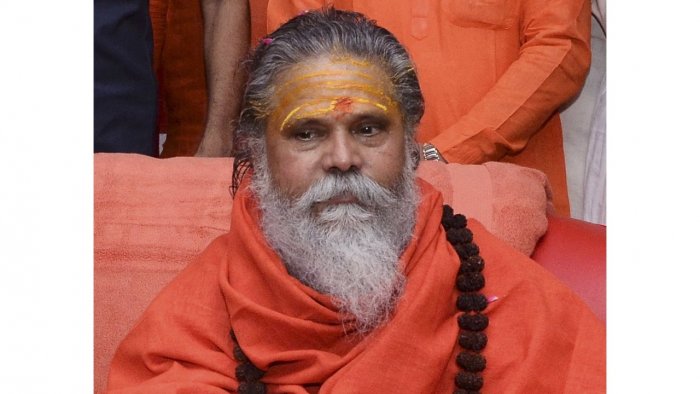 Three disciples of top seer and All India Akhara Parishad president Mahant Narendra Giri, who died allegedly by 'suicide' on Monday evening, were booked on charges of abetment of suicide and were taken into custody by the police.

Narendra Giri was found hanging in his room at Baghamabri Mutt in Uttar Pradesh's Prayagraj town, about 200 kilometres from Lucknow. An alleged eight-page ''suicide note'' was recovered from his room, according to police sources.

A senior police official said in Prayagraj that the Mahant had accused three disciples of his of 'harassing' him. ''I have lived my life with dignity but now I am being harassed and forced to life of humiliation,'' he reportedly wrote in the alleged suicide note.

Sources said that Narendra Giri mentioned the names of the disciples, who, he said, had been harassing him. One of the disciples, identified as Anand Giri was detained in Haridwar town in Uttarakhand while two others, identified as Adya Tewari and Sandeep Tewari, were taken into custody from Prayagraj. All three were booked under section 306 of the Indian Penal Code (abetment of suicide).

Sources said that Narendra Giri and his disciple Anand Giri had been having some dispute and that Anand Giri had been expelled from the Baghambari Mutt recently. Anand Giri, however, claimed that he had tendered an apology to the Akhara Parishad president and the issue had been resolved.

Narendra Giri enjoyed considerable clout among the seers and politicians, especially from the BJP, including ministers, used to make a bee line before his Mutt to meet him and receive his blessings.

Bengaluru, Oct 16: The House Committee of Karnataka Assembly, chaired by BJP MLA Goolihatti Shekhar, has decided to conduct a survey to identify unauthorised people connected to Christian missionaries, carrying out conversion activities in the state.

On October 13, the House Committee convened a meeting and took the decision after the issue came up for discussion in the state assembly on September 21.

Shekhar had raised the issue and had alleged that as many as 20,000 people including his 72-year-old mother had converted to Christianity in Chitradurga district.

The House Committee wants to decipher the number of authorised and unauthorised people engaged in the activities of Christian missionaries in the state, Shekhar said.

Directions also have been given to authorities in three Yadgir, Chitradurga and Vijayapura districts to check conversion activities, he said.

These districts are the most backward regions of the state and the poor people fall prey to Christian missionaries' allurement tactics, Shekhar said.

The authorities have also been directed to initiate stringent action soon after receiving reports of conversion activity, he said.

The House Committee is finding ways within the parameters of the law to stop converted Dalits availing reservation benefits, Shekhar said.

The pro-Hindu outfits have been very active in raiding the places of conversions across the state with the help of police.

Police have arrested four brothers for allegedly killing an NRI businessman during his visit to Hyderabad.

According to Gajarao Bhupal, Deputy Commissioner of Police (DCP), South Zone (Hyderabad), the arrested accused are identified as - Rayees Jabri, Adil Jabri, Syeed Saleh Jabri and Saad Bin Saleh Jabri. All residents of the Chandrayangutta area of the city.

“The victim and accused Rayees Jabri had used to work together in Dubai. In 2019, while the accused Rayees Jabri was returning to India, the victim had given him a bag of gold without his knowledge, to deliver it in India from Dubai. At the airport, he was arrested with one kilogram of gold,” said Bhupal.

The DCP said that during interrogation, the accused Raees said the victim had promised him financial aid and a job but didn’t do so.

“When the businessman came to India from Dubai, the brothers confronted him on Wednesday and when he refused to fulfil the promises, they decided to kill him,” he added.

Police had registered an FIR into the matter after the victim to stabbed to death on Wednesday.