A gentleman who lived a life of contradictions

With the death of Katte Vedavyasa Srinivasa Acharya, Karnataka has lost one of its gentleman politicians and administrators. The 72-year-old Acharya rose from the ranks through hard work and dedication and narrowly missed becoming the chief minister. He had a mastery over an array of subjects, including finance, education, power and local governance. He was able to drive home his viewpoints in a very efficient manner, so much so that he made members in the treasury benches listen to him in rapt attention. Dr. Acharya spent nearly 10 years of his 16-year stint in the Legislative Council as an opposition member, and invariably he used to be the first member from the Opposition ranks to be called to speak during a debate.

His contribution to the growth of the Bharatiya Janata Party and its erstwhile avtar Jan Sangh can be gauged by the fact that he headed first Jan Sangh-led municipal council in southern India. Senior BJP leader L.K. Advani has recalled on several occasions that Dr. Acharya was the man who sowed the seeds for BJP’s growth in the coastal Karnataka. He took the reins of the Udupi municipality at a young age of 28 and took a number of initiatives to develop it as one of the best-administered local bodies in the State. Although he tasted defeats in the Assembly elections a couple of times, he triumphed over Congress candidate Manorama Madhwaraj in 1983 elections which saw 18 BJP MLAs elected to the Assembly. Since he had been a staunch votary of anti-Congressism, he played a key role in convincing the BJP national leaders to give outside support to the first-ever non-Congress government in the State led by Ramakrishna Hegde. 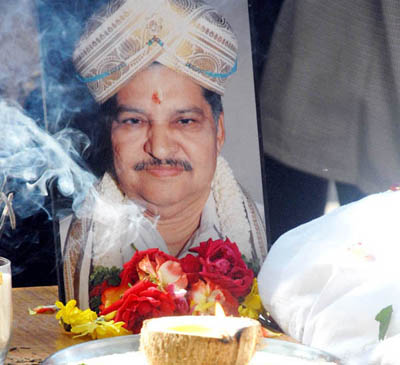 Dr Acharya’s role in BJP’s growth from a two-member party in 1985 to the ruling party in 2008, can be understood by the fact that the election manifestos of the BJP from the 80s have been prepared singlehandedly by him. Although he was not a mass leader and not a great public orator, his scholarly inputs and interventions helped BJP shed its image of a predominantly urban party supported mainly by upper caste people. Despite being a hardcore traditionalist and conservative, he had tried to bring about social justice and equality in his own way. Much before the practice of carrying night soil was banned in Karnataka in the early 80s Dr. Acharya had put an end to the custom in Udupi as the head of the civic body. He had also made it a practice to get tea and coffee served at his office from persons belonging to Koraga community. But, he could not show the same courage when the controversy over Madesnana, a practice of devotees rolling over the left over meals of Brahmins, broke out and indirectly supported the inhuman practice.

As minister he had an eventful debut in the Kumaraswamy-led coalition government. He was instrumental in setting up six new medical colleges in the State and to a great extent succeeded in reigning in the powerful lobby of private medical colleges. But, his stint as the Home Minister in the first-ever BJP government under the leadership of Yeddyurappa was a disaster as a series of blunders committed by him dented the image of the government. His kneejerk reaction in Udupi MLA Raghupathi Bhat’s wife Padmapriya’s abduction and eventual “suicide” case raised questions about his efficiency. Once again he stood exposed during and after the church attacks in Mangalore and other parts of the State in 2009. The government not only failed to prevent the spate of hate attacks by the Hindutva groups, but also left the Christian community fend for itself in their hour of crisis. He also presided over the sham called “Justice Somashekhar Commission”, which failed to nail the culprits of the attack.

Being the ideologue of the BJP, Dr. Acharya never hesitated to pursue the core Hindutva ideology of the party. In fact, the Karnataka Prevention of Slaughter and Preservation of Cattle Bill 2010, which envisages a maximum jail term of seven years for the offenders and virtually equates the killing of a cow with the murder of a human being, was his brainchild. The proposed Bill, which has been ratified by both Houses of the Karnataka Legislature and awaiting the President’s nod, removes any distinction between "cow" and "cattle" and criminalises slaughter of any cattle, irrespective of its age, sale, usage and possession of beef, sale, purchase or disposal of cattle for slaughter, and food habits of millions of people.

Dr. Acharya’s support to the Udupi Power Corporation Limited has also come under severe criticism and it was also alleged that he had his hand-picked members in the experts’ panel that was constituted to look into the environmental impact of the project. His pro-industry stand has even surprised many insiders who see him as a representative of BJP’s old school polity. Dr Acharya had also rubbed Pejawar seer on the wrong side on the UPCL issue, but had been of the firm belief that the coal-based power project was the way forward for the district to tide over its power problems. 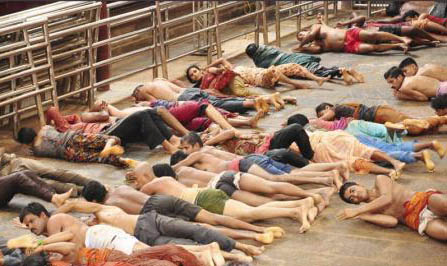 The innate contradictions in his personality also came to the fore when he supported the allegedly obscene rave party at St. Mary’s Island and backed the three porn-tainted ministers.

It is quite possible that Dr Acharya would have been reluctantly batting for the Government especially on issues which are fundamentally in conflict with the ideology of the party. The developments of the last four years within the party, which was increasingly becoming a “party with differences” from “the party with difference”, might have taken a toll on him both mentally and physically. But, unfortunately, despite his stature and non-controversial image, he did not speak up when it mattered the most.

Ironically, the Bhishmacharya of the party, much like the mythological figure, remained a mute spectator to the saga of blunders and wrongdoings committed by the party and its leaders in their mad pursuit of power. He would have found a place in the history, had he remained true to his conscience spoke up against “operation kamala”, land allotment scams and the day-light plunder of exchequer by a number of his colleagues. Alas, he missed the opportunity. But, in this hour of sadness and grief, we extend him our respects and to his family, our deep condolences.