A month after Uppinangady row, the hate-monger in chief remains defiant

It’s been a month since RSS leader Kalladka Prabhakar Bhat’s anti-minority speech in Uppinangady nearly pushed the district to the brink of a communal violence. But, the law-enforcing agencies in the district have hardly initiated any action against the firebrand leader, who continues to exercise his clout over the government machinery in the state.

Much water has flown down the Kumaradhara since January 22, when Mr. Bhat launched a virulent attack on Muslims and Christians. Uppinangady has moved on after the unprecedented spell of tension and lawlessness. Mr. Bhat, who is dubbed as the super chief minister in some quarters, has emerged unscathed despite the backlash from secular groups. He, and four others have been slapped with sections 159A (promoting enmity between groups) and 295A (deliberate and malicious acts intended to outrage religious feelings) of the Indian Penal Code. 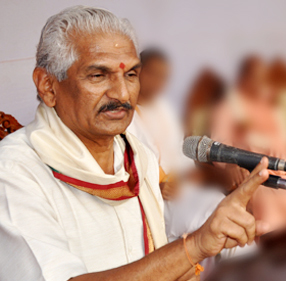 There is no evidence to suggest that he has applied for anticipatory bail, nor any clue of the police authorities making an attempt to arrest him.

Mr. Bhat, in fact, rubbed shoulders with Chief Minister Sadananda Gowda at the RSS meeting in Hubli the very next week, sending out a strong message that he was way beyond the reach of law. In another pre-mediated public posturing, he managed to secure the seat next to Home Minister R. Ashoka at the inauguration of the new building of Mangalore Police Commissionerate. The next day pictures of him engaged in an animated conversation with the Home Minister were carried by several newspapers.

Mr. Bhat, through these well-orchestrated PR exercises, had made a strong point to the local police. Instead of seeking an anticipatory bail to avert arrest, he has been virtually intimidating the police authorities by occupying the VIP row at all the government and semi-government functions. In fact, a clear message had been sent to the district administration just three days after the incident, when the then district in-charge minister Krishna J Palemar visited Uppinangady and virtually gave Bhat a clean chit. Muslim leaders of the BJP also pitched in and played their role to perfection by defending the indefensible.

The script also required that police book cases against some Muslim leaders in connection with the Uppinangady incident. The police booked cases against Muslim Central Committee president K S Mohammed Masood, Uppinangady Jumma Masjid president Haji Mustafa Kempi and eight others for “promoting enmity between groups”. All the 10 were accused of conspiring to start a riot by misrepresenting the contents of Mr. Bhat’s speech. Interestingly, the basis for the police action against the Muslim leaders was the press conference they had called to demand action against the RSS leader. 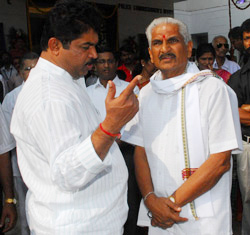 The cases foisted against Muslim leaders remind one of the famous adage “Ulta chor kotwal ku dante”. But, it will be too naïve to believe that the police were acting on their own will and wisdom. The sub-plot in all probability had been devised with the consent of RSS leader and the grand plan now appears to be striking a deal using police as middlemen. Significantly, the police have not initiated any criminal action against the Muslim leaders in the last fortnight despite filing cases under sections which require them to seek anticipatory bail. The go-slow approach clearly shows that the police is keen on filing a B report and wind up the case once for all.

However, in the larger interest of safeguarding secularism and communal harmony in the district, it is necessary that the police take stringent action against Mr. Bhat, who has dared the police department to book cases against him in his speech. The need of the hour is to look beyond the immediate gains and momentary respite. It is the duty of all secular-minded people to ensure that the arm of law catches up with the RSS leader. It is the duty of the peace-loving citizens of Dakshina Kannada to bring sustained pressure on the authorities and keep the tempo on. If we blink and dither at this crucial hour, the days will not be too far when Dakshina Kannada will become the laboratory for the Gujrat-type Hindutva politics.