Attack on media: Time to rein in 'rowdy' lawyers 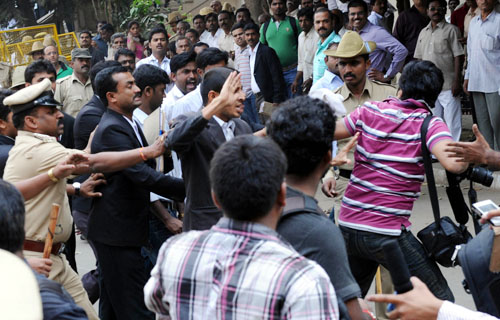 The unprecedented attack on media persons in Bangalore by a section of lawyers deserves to be condemned in the severest terms possible. The unprovoked assault and the subsequent chaos have also sparked uproar across the State with all right-thinking people expressing anguish about the turn of events. In fact, the episode is a blot on the image of the legal fraternity, who along with the legislature and executive have been considered the pillars of Indian democracy. Unfortunately, the practitioners of law showed scant regard for the rule of law and the civilized behaviour by indulging in violence of the worst kind, sending out a wrong message to over six crore law-abiding citizens of the State.

The provocation for Friday’s attack seems to be the perceived resentment among a section of lawyers about the negative coverage they received in the aftermath of an incident that happened in January. A couple of lawyers were allegedly beaten up by police for violating traffic rule resulting in large-scale acrimony with hundreds of lawyers staging a protest near Mysore Bank circle in Bangalore. The striking lawyers had held the entire city hostage for over seven hours by causing a major gridlock of vehicular traffic. The lawyers’ mindless act had come under sharp media scrutiny, but the administration buckled under pressure and instead of taking action against the lawyers for blocking traffic for over seven hours, reprimanded the police. After settling scores with the police, a section of lawyers were keen to train their guns against the media and the scheduled arrival of Janardhana Reddy turned out to be the right moment for unleashing their fury. 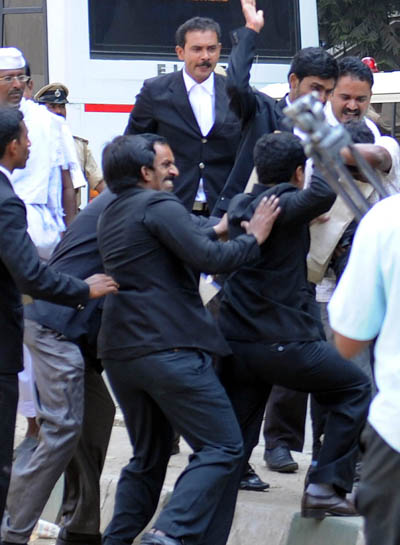 The failure of the law and order machinery in both preempting and controlling the violence was too glaring as the law-breakers held the court premises to ransom for nearly six to seven hours despite the presence of a large posse of policemen. The police are trained to control even the worst of communal riots in six hours, but, they were found indecisive and utterly inefficient in handling a normal law and order situation. In fact, they allowed a minor skirmish to snowball into a riot-like situation and resorted to use of force only after the men in uniform bore the brunt of lawyers’ mindless attack. Significantly, the same police who were treating the rowdy lawyers with kid gloves, switched gears dramatically and went berserk by resorting to indiscriminate lathicharge and in the process also injured a Sessions Court Judge. The vehicles of lawyers were also set on fire. The unexplainably inconsistent reaction of the police is a reflection of the Government’s indecisiveness and casual approach, which needs to be condemned in equal terms.

The government has resorted to the usual damage control exercise by ordering a judicial probe into Friday’s episode, but, with a number of reports of inquiry commissions gathering dust, one could hardly expect anything dramatic from the present exercise. This is just a ploy to buy time and turn focus away from the failure of the government to handle the situation and guarantee protection to the media persons to discharge their duties in a free and fair manner. With the infighting in BJP reaching its peak, it cannot be ruled out completely that the Friday’s incidents could have been used by the rival groups to undermine one another. The surprisingly guarded reactions from both Chief Minister D.V. SadanandaGowda and Home Minister R. Ashoka points to lack of coherence and coordination at the highest level. 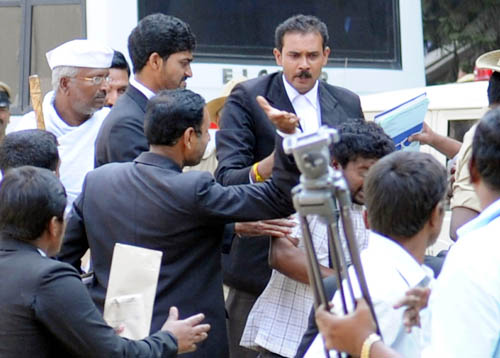 It is high time that the government took some bold action to prove the point that all are equal before law. As rightly pointed out by editors of Kannada news channels only a CBI inquiry will bring out the truth. The government should also book cases against the rowdy lawyers without any further delay to restore people’s belief in the rule of law. The legal fraternity also should think about the dent caused by these elements to their image and initiate disciplinary action against those involved in Friday’s vandalism. Their memberships should be suspended immediately. Turning this utterly shameful act into a clash between the institutions will do no good to anyone. Finally, both members of the media and the legal fraternity should initiate some confidence building measures to foster understanding and trust.

Heya just wanted to give you a quick heads up and let you know a few of the
pictures aren't loading properly. I'm not sure why but I think its
a linking issue. I've tried it in two different browsers and both
show the same outcome.

This design is spectacular! You certainly know how to keep
a reader amused. Between your wit and your videos, I was
almost moved to start my own blog (well, almost...HaHa!) Wonderful job.
I really enjoyed what you had to say, and more than that, how you presented it.
Too cool!