Kannada Press Day: Let us resolve to uphold the values of journalism

Reams of newsprint and hours of broadcast time has been spent debating if it was proper on the part of a section of the Kannada media for subjecting the controversial godman Nityananda to a witch-hunt following revelations in the wake of his alleged sexual misdemeanor with his women disciples. Some media critics consider the attack as a classic case of trial by media and journalistic overreach. The newspapers and television channels should have, they argue, just placed the facts before the public and allowed the law to take its own course. A leading Kannada news channel has also been accused of dictating the course of justice and whipping up a mass hysteria against the controversial godman.

At a time when there is a raging debate about regulating the media, the actions of some media groups in the backdrop Nityananda episode has given a shot in the arm for people favouring an independent ombudsman to rein in the ‘wayward’ fourth estate. But, quite significantly, Mangalora Samachara, the first Kannada newspaper, in its very first issue (July 1, 1843) had spelt out the rules and regulations of the paper, which could even today be a model for the contemporary media. Hermann Mogling, the publisher of the newspaper, which was printed using stone slabs, has spelt out the reason behind its publication in a very interesting way. “If a man in Bunder or near the Office area (today’s DC office?) speaks to someone in a loud voice about some news, which is just a figment of his imagination, there are chances that a third person overhearing it would spread the same news to some more people. By evening, the entire town will be filled with this false news. By the time people realize that yesterday’s news is false, a fresh rumour would have started doing the rounds,” reads the opening line of the first edition of the Samachara.

“Therefore, in order to give the correct information to the people, it has been decided to bring out a paper on a fortnightly basis,” declares the first ‘editorial’ of the newspaper.

It is also interesting to note that the content of the first newspaper was far ahead of its time. It contained seven sections with ‘Voora Varthamana’ being the first one. Here Mogling explains the reason behind publishing the newspaper. “If the government or its head undertakes a good deed, it has to be communicated to the people. If any illegal activity has taken place, it has to be informed to the people in such a way that it should deter them from committing a similar act,” the edit adds. It also has separate columns for publishing government’s order/directive, national-level news, strange-but-true stories, international news. It is also quite amazing to find a separate section for ‘thought for the day’ and fables and stories similar to ‘speaking tree’ and other such columns being published in today’s leading newspapers.

Unfortunately, the media today has also forgotten the principle of upholding the truth and making sure that falsehood did not creep into the newspaper pages. The first issue of ‘Mangalora Samachara’ also comes through as an exemplary model for today’s media when it comes to verifying facts before publishing any report. In the eighth section (read page) it provides space for people to send in reports that they think need to be published in the interest of the people. But Mogling has clearly stated that any news would be published only after verifying its truthfulness. At a time when the media as a whole, including the Kannada press, presents a picture of despair and gloom, it would be apt for all of us in the media to revisit the maiden ‘editorial’ of the ‘Mangalora Samachara’, which was priced at one duddu (equivalent of 4 pai), to renew our commitment to the profession. 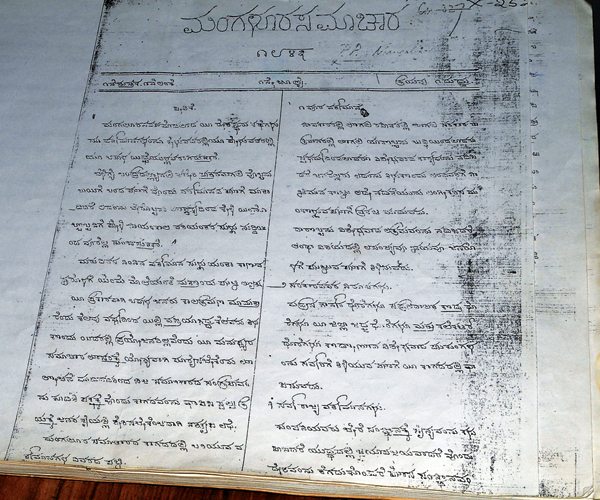 I agree with you, Which we have to change the mindset of thoughts to overcome this issues. My Self we are offering the Kannada TV Channels through online with the help of YuppTV