New Delhi, Nov 21: Criticizing the government over its decision on disinvestment of BPCL and other companies, the Congress on Thursday accused it of "selling the country". 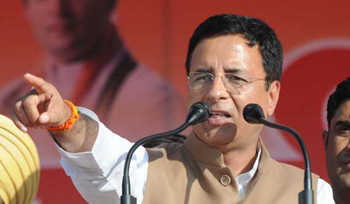 The Cabinet on Wednesday approved a strategic divestment of the government's 53.29 percent stake in the BPCL, along with the transfer of certain management control. This is excluding BPCL's equity shareholding of 61 percent stake in Numaligarh Refinery.

"They did not create anything but will sell everything. This is called selling the country. If there is Modi, it is possible," tweeted Randeep Surjewala in Hindi.

New Delhi, July 22: India on Thursday recorded 507 coronavirus fatalities in the last 24 hours, pushing the country's death toll to 4,18,987, according to the Union Health Ministry data.

Meanwhile, Congress leader Rahul Gandhi on Wednesday alleged that around 50 lakh Indians died during the second wave of Covid-19 infection due to "wrong decisions" of the Union government.

Mumbai, July 18: At least 26 persons were killed and several injured in rain-related incidents as cloudburst triggered heavy downpour in Mumbai and its suburbs on Sunday.

The rail, road and air services were affected in Mumbai because of the intense rains.

The intense rains resulted in water-logging because of water gushing into the ground floor of several buildings in low-lying areas and slowing down the road traffic.

The Western Railway and Central Railway services within the Mumbai Metropolitan Region were affected, however, being Sunday, the impact was not much felt.

There was severe water-logging on WR’s Vasai-Nalasopara-Virar stretch while CR’s Main and Harbour line services were affected as water gushed into the tracks at Dadar, Sion, Kurla, Vidyavihar, Tilak Nagar and Chunabhatti.

While 17 were reported dead after a retaining wall collapsed in Vashi Naka at Mahul off Chembur, in another incident at Suryanagar in Vikhroli where five to six hutments caved in because of a landslide killing 6 persons. A youth died in a wall collapse in Bhandup.

More than half a dozen persons are in the hospital undergoing treatment.

The NDRF joined the BrihanMumbai Municipal Corporation and Mumbai Fire Brigade in the rescue operations that are still continuing.

The twin districts of Mumbai City and Mumbai Suburban and neighbouring Palghar, Thane and Raigad districts received 150 to 300 mm plus rainfall in the last 36 hours.

The Mumbai-based Regional Meteorological Centre and Pune-based Climate Research and Services have forecast heavy to very heavy rains in the North Konkan belt on Monday.

Maharashtra Chief Minister Uddhav Thackeray held a review meeting with top officials even as his son and state’s Tourism Minister Aaditya Thackeray, who is the Guardian Minister of Mumbai Suburban, visited the spots.

Thackeray Sr announced an ex-gratia of Rs 5 lakh to the next of kin of the deceased and free treatment to the injured.

Prime Minister Narendra Modi announced Rs 2 lakh for the next of kin of the deceased and Rs 50,000 for the injured.