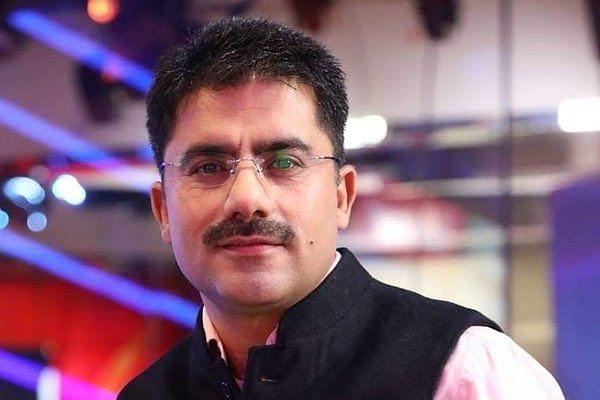 Senior politicians and his colleagues in the media offered their condolences. Many union ministers expressed condolence over the demise of Sardana who was associated with Aaj Tak news channel.

“Pained to learn about Shri Rohit Sardana ji’s untimely demise. In him, the nation has lost a brave journalist who always stood up for unbiased and fair reporting. May God give his family the strength to bear this tragic loss. My deepest condolences to his family and followers,” Home Minister Amit Shah tweeted.

Another Union minister Jitendra Singh said, “A promising journalistic career abruptly cut short. His best was yet to come. Young RohitSardana , who was only yesterday tweeting to arrange help for COVID victims, has himself succumbed to the cruel pandemic.”

Another colleague Rahul Kanwal said, “Rohit Sardana was the sharpest young anchor I have met. Superb command over Hindi, brilliant with his turn of the phrase, precise questions, clear in his thinking, loved by the masses, warm and humble off the screen, he was destined for great things. Our newsroom is in deep shock.”

Mumabi, June 11: Petrol price in the financial capital of Mumbai breached the Rs 102-mark (per litre) on Friday after a fresh hike in the fuel prices across the country.

Fuel prices have touched record highs after consistent hikes for over a month. In Mumbai, petrol price soared to Rs 102.04 and diesel now costs Rs 94.15, according to Indian Oil Corporation.

Both petrol and diesel were up by at least 28 paise across four metro cities. In national capital Delhi, petrol price stood at Rs 95.85, a record high, and diesel is charged at Rs 86.75.

Opposition party workers have gathered in various parts of the country protesting Centre's hikes in petrol and diesel prices.

Fuel prices differ from state to state depending on the incidence of local taxes such as VAT and freight charges. Rajasthan levies the highest value-added tax (VAT) on petrol in the country, followed by Madhya Pradesh and Maharashtra.

Russian President Vladimir Putin, in advance of his June 16 meeting with United States President Joe Biden, said relations between the US and Russia are at a nadir.

“We have a bilateral relationship that has deteriorated to its lowest point in recent years,” Putin told NBC News in an interview broadcast Friday with an English translation of his remarks.

Putin and Biden will meet in Geneva next week and Biden, upon arriving in the United Kingdom for his first overseas trip as president Wednesday, warned Putin he would send a clear message to him during their meeting.

“We’re not seeking conflict with Russia,” Biden said. “We want a stable and predictable relationship … but I’ve been clear: The United States will respond in a robust and meaningful way if the Russian government engages in harmful activities.”

The leaders’ first in-person meeting comes as relations between Washington and Moscow are strained over several issues, including alleged Russian cyberattacks against the US and the detention of Alexey Navalny, a critic of the Kremlin.

“Well even now, I believe that former US President Mr Trump is an extraordinary individual, talented individual, otherwise he would not have become US president,” Putin said.

“He is a colourful individual. You may like him or not. And, but he didn’t come from the US establishment, he had not been part of big-time politics before, and some like it, some don’t like it, but that is a fact.”

Putin added that Biden “is radically different from Trump because President Biden is a career man. He has spent virtually his entire adulthood in politics.”

“That’s a different kind of person, and it is my great hope that yes, there are some advantages, some disadvantages, but there will not be any impulse-based movements, on behalf of the sitting US president.”

US officials see next week’s face-to-face meeting between Putin and Biden as an opportunity to tilt the relationship away from what they view as former President Trump’s fawning overtures to Putin.

Russian officials told the Reuters news agency they regard the summit as an opportunity to hear from Biden directly after what one source close to the Russian government said were mixed messages from the US administration that took office on January 20.

Asked by NBC about Biden calling him a killer in an interview in March, Putin said he had heard dozens of such accusations. “This is not something I worry about in the least,” Putin said.

Democracy is in danger in US and around the world, says Biden as he commemorates war dead

Washington, June 1: Joe Biden warned in a speech commemorating America’s war dead on Memorial Day that US democracy was “in peril” and called for empathy among his fellow citizens.

Speaking at Arlington National Cemetery, the US president, joined by first lady Jill Biden, Vice-President Kamala Harris and her husband, paid tribute to America’s war dead whom he described as making the ultimate sacrifice in the pursuit of democracy.

But he added that US democracy was itself in danger. “The mission falls to each of us, each and every day. Democracy itself is in peril, here at home and around the world,” he said, adding: “What we do now, how we honor the memory of the fallen, will determine whether democracy will long endure.”

Biden’s speech played out against a tumultuous time in American politics, which have been shaken by four years of erratic and norm-shattering rule by Donald Trump which culminated in the 6 January attack on the Capitol in Washington DC by a Trump-supporting mob seeking to disrupt the formalization of Biden’s electoral win.

It also comes at a time of civic unrest sparked by largely rightwing protests against shutdowns caused by the coronavirus pandemic, the spread of conspiracy theories around election fairness stoked by Trump and the far right and widespread demonstrations against racism and police brutality.

Biden centered his speech on the ideals of a democracy that thrives when citizens can vote, when there is a free press and when there are equal rights for all.

“This nation was built on an idea,” Biden said in his address. “We were built on an idea, the idea of liberty and opportunity for all. We’ve never fully realized that aspiration of our founders, but every generation has opened the door a little wider.”

Since he beat Trump to the White House last year Trump and many other Republicans have sought to baselessly portray the election as having been somehow fraudulent. They have launched scores of court cases and even a so-called “audit” of the results in in Arizona’s largest county.

Republican state legislatures have also passed local voting laws aimed at restricting voting access that civil rights advocates say are aimed at communities of color. On Sunday night Texas Republicans failed to push through one of the most restrictive voting measures in the US after Democrats walked out of the state House at the last minute. But other measures have passed in states like Georgia and Florida.

While politicians from both sides of the US political spectrum routinely speak of a “battle for the soul of America” to describe their mission to voters, Biden’s holiday address came as Trump’s former national security adviser Lt Gen Michael Flynn also said over the weekend that a Myanmar-like coup “should happen” in the US.

Appearing before a conference of the QAnon conspiracy movement in Dallas, Flynn was asked by an attendee if what was happening in Myanmar – in which the military overthrew a democratically elected government – could be repeated at home.

“There’s no reason,” Flynn told a cheering audience. “I mean, it should happen – that’s right.”

Since Myanmar’s military seized power in February, and detained the country’s democratically elected leaders, at least 800 civilians have died and thousands have been arrested.

Flynn was fired by Trump in 2017 after it was revealed that he had lied to Vice-President Mike Pence over contacts with Russian ambassador Sergei Kislyak.

He later pleaded guilty to making false statements to the FBI, then withdraw his plea and the justice department dropped charges against him. Trump later pardoned the general. In January, Twitter banned Flynn from its platform in a purge of accounts promoting QAnon theories.