Bahrain has added more countries to its Red List, and passengers arriving from these countries are prohibited from entry unless they are citizens or residents of the Kingdom of Bahrain.

This includes passengers who have transited through any of those countries at any point in the preceding 14 days.

Passengers eligible for entry must present a negative PCR certificate, with a QR code, administered within 48 hours of their departure, undergo further testing upon arrival, and on their 10th day of mandatory quarantine. Payment for testing may be made on arrival or through the 'Be Aware Bahrain' application.

For travellers' convenience, designated quarantine centres licensed by the National Health Regulatory Authority (NHRA) are available. Passengers with an address in Bahrain, registered in their name or the name of an immediate family member, may complete their 10-day mandatory quarantine at that residence. Passengers aged six and below are exempt from these requirements.

All other travel procedures for arrivals from non-Red List countries remain in place.

Many Cong legislators ready to join BJP; we will win 140 seats in next assembly polls: BSY

Bengaluru, Sept 20: Senior BJP leader and former Karnataka Chief Minister B S Yediyurappa on Monday claimed that several Congress legislators were ready to join the BJP. He was responding to a question from reporters here on his statement that the Congress was trying to lure BJP leaders.

"They (Congress) will certainly make such attempts, but already several Congress legislators are ready to come with us. You will get to know soon who all they are. So any such attempts by Shivakumar (KPCC chief) or anybody else will not be successful," he said. He said BJP will win more than 140 seats and come back to power.

Addressing the BJP state executive meeting at Davangere on Sunday, the veteran leader had asked party men not to take opposition parties lightly, as they have their own strategy and strengths, and that Congress leaders were trying to contact several party leaders.

He had also alleged that Shivakumar was making attempts to contact party leaders, but he would not succeed.

However, responding to Yediyurappa''s claims about him trying to contact BJP leaders, Shivakumar said he wouldn''t like to disclose his party''s strategy.

Leader of the Opposition Siddaramaiah said today that if anyone wants to join the party voluntarily, it would be considered. 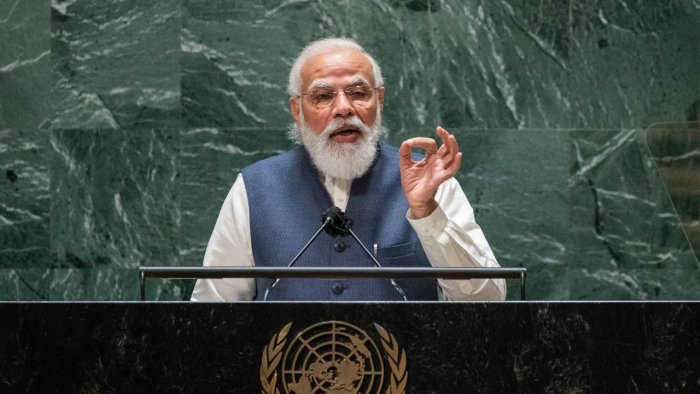 Prime Minister Narendra Modi said on Saturday that countries with "regressive thinking" that are using terrorism as a "political tool" must understand that it is an equally big threat for them also, in a veiled attack on Pakistan which is often accused by its neighbours of providing safe havens to terrorists.

Addressing the 76th UN General Assembly here, Prime Minister Modi also said that in order to strengthen the rules-based world order, the international community must speak in unison, in an apparent reference to China which is flexing its military muscles in the Indo-Pacific.

Noting that the world is facing an increased threat of regressive thinking and extremism, Modi said countries that are using terrorism as a political tool have to understand that terrorism is an equally big threat to them.

"It is absolutely essential to ensure that Afghanistan's territory is not used to spread terrorism and for terrorist activities,” he said. “We also need to ensure that no country tries to take advantage of the delicate situation in Afghanistan and use it for its own selfish interests.”

Pakistan’s neighbours, including Afghanistan and India, and the US have long accused Islamabad of providing safe haven and support to militants, a charge denied by it.

Modi said that oceans are also a shared heritage.

"Our oceans are also the lifeline of international trade. We must protect them from the race for expansion. The international community must speak in one voice to strengthen a rule-based world order,” he added.

The Bharat Bandh or the nationwide strike declared by farmers on September 27 to protest against the three central farm laws has garnered support from several political parties. The strike on Monday, which is to be led by the Samyukt Kisan Morcha (SKM) – an umbrella body of farmers' unions spearheading the anti-farm law protests – has now received support from the YS Jagan Mohan Reddy-led Andhra Pradesh government; meanwhile, the Congress, the Aam Aadmi Party (AAP) and the Telugu Desam Party (TDP). And the Left parties have already extended support to the Bharat Bandh earlier.

The Bharat Bandh has been called by the farmer unions to protest the three contentious agricultural laws passed by the central government, against which the farmers have been demonstrating

The government and farmer unions have held 11 rounds of talks so far, the last being on January 22, to break the deadlock and end the farmers' protest. Talks have not resumed following widespread violence during a tractor rally by protesting farmers on January 26.

The three laws—The Farmers' Produce Trade and Commerce (Promotion and Facilitation) Act, 2020, The Farmers (Empowerment and Protection) Agreement of Price Assurance and Farm Services Act, 2020, and The Essential Commodities (Amendment) Act, 2020—were passed by the Parliament in September last year.

Farmer groups have alleged that these laws will end the mandi and minimum support price (MSP) procurement systems and leave the farmers at the mercy of big corporates, even as the government has rejected these apprehensions as misplaced and asserted that these steps will help increase farmers' income. The Supreme Court in January stayed the implementation of the three laws till further orders and appointed a panel to resolve the impasse.

Which political parties have supported the Bharat Bandh?

The YSR Congress-led Andhra Pradesh government is the latest political quarter to throw its weight behind the September 27 Bharat Bandh called by the farmers.

The announcement was made by Andhra Pradesh information and transport minister Perni Venkataramaiah (Nani) said on Saturday. He said that the state government, led by YS Jagan Mohan Reddy, has extended its ‘full support’ to the Bharat Bandh on September 27 in solidarity with the concerns of farmers. Additionally, the Andhra Pradesh government is also supporting the concerns of the Visakhapatnam steel plant workers, who have been opposing privatisation attempts by the central government.

In view of this, Nani said the Andhra Pradesh government has decided to stop APSRTC buses across the state from September 26 midnight to September 27 afternoon. The minister, however, appealed for peaceful protests in the Bandh.

The AAP has also supported the Bharat Bandh call issued by the Samyukt Kisan Morcha on September 27. Announcing the party's support for the nationwide strike in solidarity with the farmers, AAP leader Raghav Chadha said on Saturday that party supremo and Delhi chief minister Arvind Kejriwal has always stood by the farmers against the “black laws.”

The Congress on Saturday extended its support to the Bharat Bandh and demanded that discussions be initiated with the protesters. Calling for a “peaceful” strike, Congress spokesperson Gourav Vallabh said the party and all its workers are in support of the Bharat Bandh call given by farmer unions against the Centre's three farm laws.

The Congress leader also demanded that the MSP should be given as a legal right to every farmer “as they do not want only 'jumlas' (rhetoric)” and referred to Prime Minister Narendra Modi's promise to double the farmers' income by 2022.

During the meeting, Donepudi Sankar, CPI State leader said, “Farmers have been agitating for nine months in Delhi, so this Bharat Bandh will be held to support them.”

In a joint statement, the Left parties – the CPI, CPI(M), All India Forward Bloc, Revolutionary Socialist Party, and the Communist Party of India (Marxist-Leninist) – urged people to extend support to the Bharat Bandh, noting that the “historic” farmers' struggle demanding the repeal of the agri-laws is now in its tenth month.

In a tweet on Friday, Tejashwi Yadav said, “In the meeting of the top leaders of the Mahagathbandhan parties held at the residence today, it was unanimously decided to participate and support the Bharat Bandh called by the United Kisan Morcha on September 27, in protest against the anti-farmer policies of the NDA government. We are firm with the farmers.”

Meanwhile, Karnataka chief minister Basavaraj Bommai on Saturday denounced the call for Bharat Bandh by the Samyukt Kisan Morcha against the Centre's three contentious farm laws on September 27, saying disrupting economic activities post-Covid-19 was not in the interest of the nation.