While two districts in Karnataka recorded deficit rainfall from June 1, the start of the southwest monsoon season, till August 15, 2022, the remaining 29 of the 31 districts recorded excess rainfall during the same period, according to official data.

Among the 227 taluks of the state, only 17 taluks recorded deficit rainfall. The highest deficit in the rainfall is reported from Yellapur in Uttara Kannada (-23%). Two core Malnad taluks of the state - Dandeli (-13%), and Virajpet (-7%) also recorded deficit rainfall. Over the next eight days, monsoon activities will remain weak in the state as the rain patterns are active in the northern parts of India.

Bengaluru, Sept 28: Karnataka Home Minister Araga Jnanendra on Wednesday welcomed the imposition of ban on the Popular Front of India (PFI) in the country for five years.

"The National Intelligence Agency (NIA) in coordination with various state police departments had carried out raids on PFI workers and gathered evidence," he said.

He further stated that PFI was one of the religious fundamental forces which indulged in pitting the youth of the country against the nation. The move to ban PFI is good in the view of maintaining the integrity and unity of the country.

This is also a step which was necessary to maintain peace and harmony in the country, the Home Minister stated.

Meanwhile, Karnataka Director General of Police Praveen Sood has given directions to take up strict vigilance across the state against the backdrop of the move. The local police have been directed to conduct peace meetings with the Muslim community leaders.

It has also been directed to take those who try to disturb peace into custody. The central government has also issued warnings to take preventive measures in this regard.

Bengaluru Police Commissioner Pratap Reddy has given directions in localities where Muslims live in more numbers. The orders have been issued to lock all the PFI's offices in the city.

The notification of the union government has mentioned the murder of BJP activist Praveen Kumar Nettare in Dakshina Kannada district in Karnataka. It has also mentioned the proposal of the Karnataka government to ban PFI. 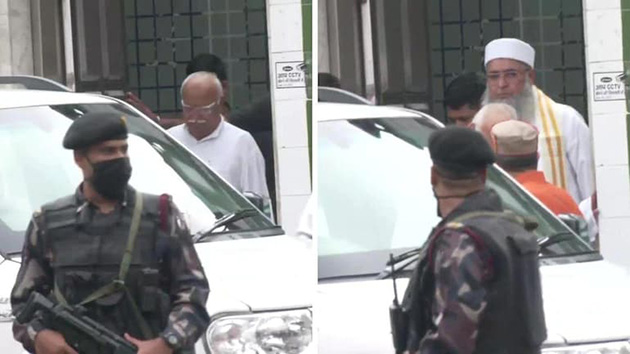 New Delhi, Sept 22: Rashtriya Swayamsevak Sangh (RSS) chief Mohan Bhagwat met with Umer Ahmed Ilyasi, the chief cleric of the All India Imam Organization, at a mosque in the heart of Delhi on Thursday.

RSS spokesperson Sunil Ambekar said that the meeting was part of the continuous discussion process.

"RSS Sarsanghachalak meets people from all walks of life. It is part of the continuous general Samvad process," the RSS spokesperson said.

A meeting was sought by these prominent Muslim intellectuals with Mohan Bhagwat after the Nupur Sharma hate speech controversy erupted. Hate speech, the Gyanvapi Masjid issue, and hate crimes resulting from hate speech were discussed, a member who attended the meeting told India Today.

In the meeting, which Quraishi called cordial, the RSS chief had recalled that his statement "Why look for a Shivling in every mosque?" must be taken forward to bridge the divide between Hindus and Muslims today. The RSS chief said that both communities must work together to bridge this divide.