Bengaluru, Oct 20: Once vaccinations for those aged between the age of 12- to 18-year-olds is given the green light, Karnataka is likely to vaccinate 16 and 17-year-olds first.

A member of the state's Covid-19 Technical Advisory Committee (TAC) said that they had recommended higher-aged children be given the vaccine first, followed by children under 16 years of age. The committee also recommended identifying co-morbid children in the 16-17 age group at the earliest.

Two vaccines — Zydus Cadila's ZyCoV-D and Bharat Bioech's Covaxin — are likely to be included in India's vaccination program for children soon. While ZyCoV-D received Emergency Use Authorisation (EUA) from the Drugs Controller General of India in August, Covaxin was recommended by the Subject Expert Committee close to a week ago. 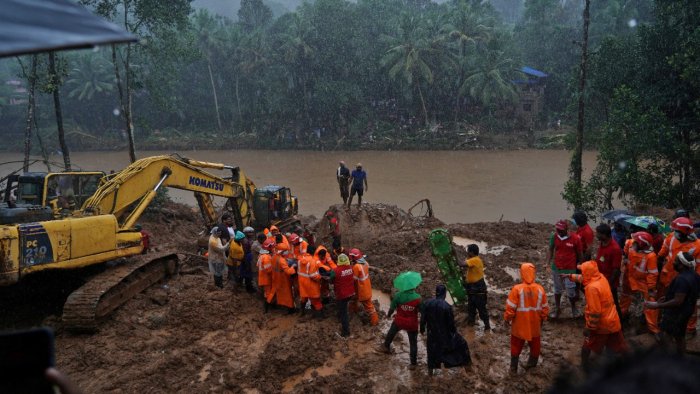 Thiruvananthapuram, Oct 18: As the death toll in Kerala floods and heavy rainfall reached 35, the Congress-led opposition on Monday accused the Pinarayi Vijayan government of not acting on time. However, the government quickly denied the charges.

Leader of Opposition V.D. Satheesan, who on Sunday visited the worst-affected areas in Idukki and Kottayam districts, raised questions as to why, despite the IMD warning, the state government failed to act.

"Wish to know why and what happened and it has now proved that the State government failed to act on warnings. We are told it took several hours for the team of government officials to reach certain spots with men and material to do the rescue act. Something has gone wrong and we want answers," said Satheesan.

State Revenue Minister K. Rajan, however, said there has been no wrong on the part of the State government.

"We rely on the reports and act on the basis of the Centre and we have done just that. Strict action will be taken against those who misuse social media when the state is passing through tough times," said Rajan.

Meanwhile, Chief Minister Pinarayi Vijayan is chairing a meeting to discuss the floods and the strategy to be adopted to open dams in the state which are full. The one decision that was taken is that dam shutters will only be opened during the daytime.

On Wednesday, when the Assembly session resumes, the opposition is going to raise the issue in the House.

Meanwhile, around 4,000 people are now lodged at various camps that have been opened in Idukki, Kottayam, Pathanamthitta and Alappuzha districts of the state.

The latest weather forecast, which has now come out predicts heavy rains to lash the state starting Wednesday.

It all started with the century's biggest floods in 2018 and since then every year, Kerala has seen heavy rains and flash floods.

This time the worst-affected have been the Kottayam and Idukki districts and though the rains have slowed down since Saturday evening and on Monday morning, authorities have issued an alert in eight of the 14 districts of the state.

However, on Monday in Pathanamthitta district in Central Kerala, things appear not very encouraging.

Meanwhile, social media has also termed the recurring natural disasters as nothing but man-made and numerous trolls have highlighted the statement of noted environmentalist Madhav Gadgil, who headed the Western Ghats Ecology Expert Panel and in 2013 warned that if Kerala does not stop tampering with the Western Ghats, a huge disaster would be round the corner.

State Minister for Health and Family Welfare and Medical Education Sudhakar K will meet the Technical Advisory Committee on Tuesday (October 26) and consult CM Bommai on the same.

Around 20 samples of a variant of the SARS-CoV-2 called ‘AY.4.2’ have been identified from India, with the earliest sample having been collected in May this year.

AY.4.2 is a sub-lineage of the Delta variant of the Covid-causing SARS-CoV-2 virus. Delta continues to be the most dominant variant circulating in India.