Bengaluru, May 12: Karnataka Home Minister Araga Jnanendra on Thursday said the state cabinet passed the ordinance on anti-conversion bill and it will be discussed in next assembly session. He also added that till then, the ordinance will be in place.

“Karnataka cabinet has approved the anti-conversion bill, it will be tabled in the next session, till then ordinance will be in place,” Araga Jnanendra was quoted as saying by news agency ANI.

Before the start of the cabinet meeting, Karnataka Chief Minister Basavaraj Bommai had said that his government is going to implement the move through the ordinance route.

It was reported that the Home Department had drafted a note which was circulated during the Cabinet meeting. The note made the case for pushing the Karnataka Protection of Right to Freedom of Religion Bill through the ordinance route.

It is believed that the Law Department in the state has stated that there are no legal hurdles for bringing the bill to life through the ordinance route.

Earlier in the day, Karnataka Congress chief DK Shivakumar had slammed the ruling Bommai government, saying that the opposition will oppose the bill.

The anti-conversion bill proposes imprisonment of 3 to 5 years with a fine of Rs 25,000 for ‘forced’ conversion. However, converting a minor, woman or an SC/ST person will attract a jail term of 3 to 10 years, with a Rs 50,000 fine. On the other hand, the mass conversions will attract 3-10 years of jail time, with a fine of up to Rs 1 lakh. 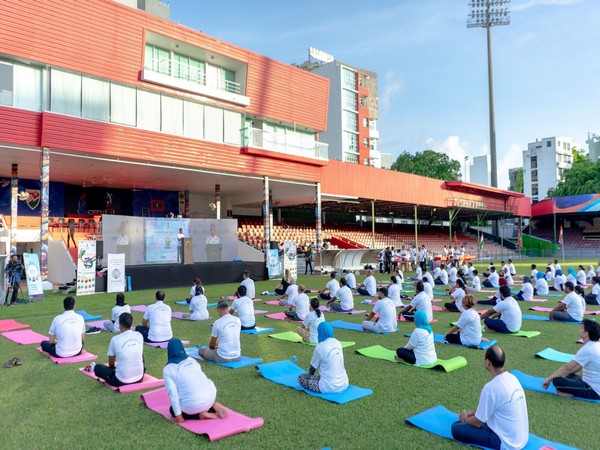 Male, June 21: Police in the Maldives used tear gas and pepper spray to control a crowd of people who disrupted a yoga event organised by the Indian High Commission, or embassy, in the capital Male on Tuesday morning, an organiser said.

The crowd stormed a stadium where more than 150 people, including diplomats and government officers, were taking part in an event celebrating International Day of Yoga, attacking participants and vandalising the property, one of the organisers, who did not want to be named because he was not authorised to speak with the media, told Reuters.

Earlier, the protesters brandished placards proclaiming that yoga was against the tenets of Islam.

Islam is the state religion in the Maldives, a group of islands in the Indian Ocean with a population of about half a million.

Six people have been arrested in connection with the incident, Nashwa said.

"This is being treated as a matter of serious concern and those responsible will be swiftly brought before the law," Solih said on Twitter.