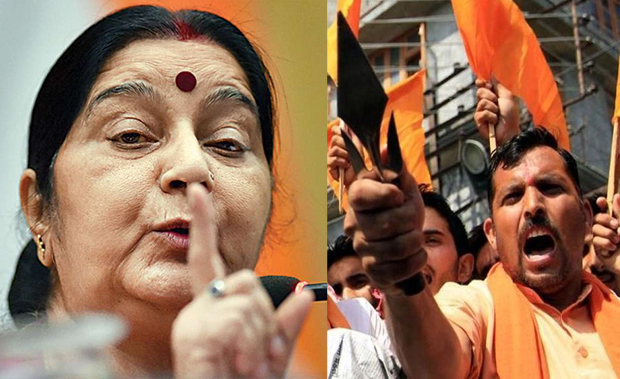 An upset minister “liked” numerous abusive and offensive tweets and wrote: "I was out of India from 17th to 23rd June 2018. I do not know what happened in my absence. However, I am honoured with some tweets. I am sharing them with you. So I have liked them."

Last week, Passport Seva Kendra official Vikas Mishra in Lucknow was transferred after a Hindu woman and her Muslim husband tweeted alleging that they were humiliated by him and their passport applications were rejected as the woman hadn’t change her surname post-marriage, and that her husband was asked to "convert to Hinduism." The next day, passports were issued to the couple and they thanked Sushma and her ministry.

The Hindutva bigots on social media who felt the passport official was unfairly targeted, began posting tweets with #ISupportVikasMishra hashtag and soon they turned their ire towards Ms Swaraj.

Ms Swaraj, who was on a four-nation European nations visit at that time, didn't reply to any of the tweets pertaining to the issue. On June 24, she liked as many as 70 tweets, all of them abusing her and calling her names.

She highlighted tweets that sought her retirement from politics, on how she was compromising on "national security", and how she might have done it "to boost her publicity." Many tweets were misogynistic and hate-driven in nature, with even her health condition not spared. She had recently undergone surgery for her kidney ailment.

Mocking Ms Swaraj as "Visa Mata" and "passport mata", the online advocates of Hindutva, uploaded numerous morphed photos the minister and urged prime minister Narendra Modi to drop her from the cabinet. Some abusers also criticized the minster’s recent move to grant medical visas to Pakistanis and accused her of “Muslim appeasement”.

However, Ms Swaraj got support from non-communal Hindus and other parties. The official handle of Congress also tweeted in her favour. "No matter the situation or reason, nothing calls for threats of violence, disrespect & abuse. @SushmaSwaraj ji, we applaud your decision to call out the heinous trolls of your own party," the tweet read.

she is great BJP Leader..

She is one of secular faces among the saffron party. May God bless her and give her good health and long life.