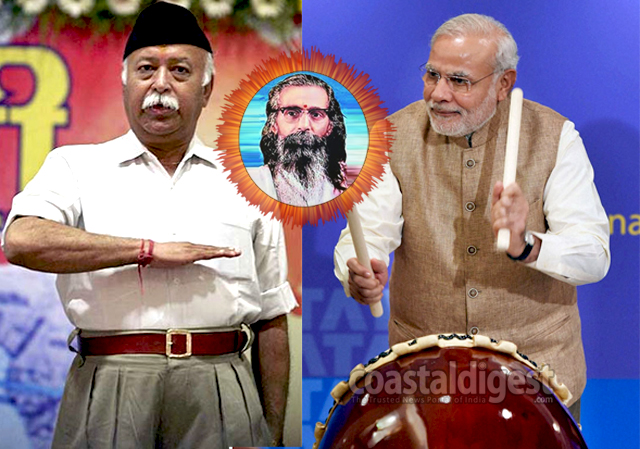 The Chief of RSS Mohan Bhagwat’s statement saying Muslims are a part of the Hindu Rashtra dream of the RSS and their vision of the nation has a place for Muslims though appears to be a googly, beyond the surface actually it isn’t.

Both these events came as a surprise to all including both the supporters and critiques of the Prime Minister and his ideological family- RSS. But a close observation of this reveals that neither of them is playing off the tune notes.

The RSS has never in its history held the desire to wipe Muslims out of this country. They, starting from their Guru Golwalkar, have always maintained the position that Muslims should live in India like second grade citizens. The allegory given by RSS throughout their history is that of big brother and younger brother, demanding the Muslims as the younger brother accept an unequal position and listen to the elder brother, the Hindus.

Yes, of course the RSS and the Prime Minister are saying nothing new or different from the philosophy of the party. But they are speaking half-truth making their position appear like that of inclusion and respect, at an interesting turn of times. No, this is not just an appropriation tactic before the elections and appeasement of the well to do Bohra community. It is all of that but it is not just that.

A close observation of the Congress party and its action reveals how desperately it is trying to impress the Hindu community and at proving itself as not an anti-Hindu party or a pro-Muslim party. Rahul Gandhi’s visits to temples were one of the series of things orchestrated by the Congress party to make this point. A fresh action on the same lines for the same purpose is the journey to be taken in Madhya Pradesh by five leaders, including Kamal Nath, Jyotiraditya Scindia and Digvijaya Singh, called Rampath Gaman. In this journey they will be retracing the footsteps of Ram and Sita during their exile.

It can be remembered how the BJP and RSS went on an aggressive hate campaign against the Congress accusing them of being pleasers of the Muslim community and being anti-Hindu. The BJP and RSS bullied the Congress so much that under the pressure of it now the Congress is trying to prove itself as a not an anti-Hindu party! Apparently, the Congress has fallen into the trap.

BJP and RSS, like they have been doing in the recent past, are again dictating the rules of the game and all of the opposition, not just Congress, are playing the game as per the rules decided by the BJP and RSS.

The action of the Congress, which is a reaction to the allegations made by the BJP, has actually triggered a sense of abandonment among the Muslims, who already have been feeling alienated because of the politics of the BJP and RSS. Taking advantage of this situation, now BJP is trying to tell the Muslim community that the Congress cannot be trusted while they can be. But of course the condition always is that the Muslim community will have to accept a second grade citizenship and behave like a younger brother, obedient to the elder brother. With Congress abandoning them, the Muslim community is forced to give supporting BJP a thought. Thus the BJP has erased opposition further.

Moreover, one should realize that Modi and the RSS are now so powerful that they can say whatever they wish to say and continue to do what they believe in, without bothering if their words and actions might appear contrary. Social scientists have identified this new phenomenon being seen not just in India but also in the United States of America and Russia where the authoritarian figures are making contrary statements one after the other and still not being held accountable or answerable neither for any of their statements or for their contradictions. The powerful, it is said, is so powerful that they determine what is to be believed as the truth. The new phenomenon is like a Chinese proverb that says, “That which triumphs is the truth,” which is quite the opposite of what was being told and believed in India: “Truth triumphs.”

In such a scenario what we can infer from what Modi and the RSS are saying is not that they have undergone a change of heart but only that they are more powerful than ever.

[Samvartha ‘Sahil’ is a freelance writer based out of Manipal, Karnataka. An alumnus of Jawaharlal Nehru University, Delhi and the Film and Television Institute of India, Pune, he has earlier worked as an academician at Manipal University and as a journalist with The Hindu.]

One who follows creators path he will completely protected by the creator. No one keechad patty will harm or they succeed with their wrong n cunning thought.

These thugs are for a temporary period n cannot expext any thing better for mankind n our  Nation.

there is no such things nor  Muslim Rashtra, nor Sikh, Christian Rashtras.

This is rashtra belongs to all. Not belongs anybody's father.

This is Great India with All commnuties.