Nirav, Lalit, Narendra… Why do all thieves have Modi surname, asks Rahul 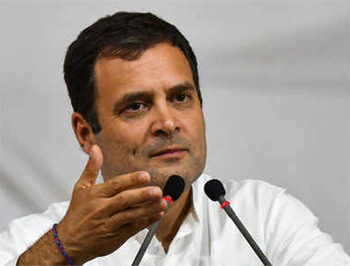 Addressing an election rally in Kolar on Saturday, Mr. Gandhi alleged that Mr. Modi had stolen money from the pockets of shopkeepers, farmers, traders and the poor and given it to the likes of Nirav Modi, Lalit Modi, Mehul Choksi, Vijay Mallya, and others who fled the country.

Referring to the Rafale issue, he said: “100% chowkidar is a chor” and alleged that the Prime Minister had stolen Rs. 30,000 crore and gifted it to his “thief friend” Anil Ambani. He [Mr. Modi] is leading the team of chors (thieves), Mr. Gandhi alleged.

“I have a question. Why do all thieves have Modi as their surnames, be it Nirav Modi, Lalit Modi or Narendra Modi? We don’t know how many more such Modis will come out,” he said.

“When we announced NYAY (Nyuntam Aay Yojana), the face of the chowkidar [a reference to Mr. Modi] changed. He asked where will money come from to implement NYAY. I’m telling you Modiji, the money for NYAY will come from your friend Anil Ambani,” he said.

“There has been no action taken against business leaders Anil Ambani and Nirav Modi, who took crores as loan and did not pay back. But farmers are jailed when they cannot pay back their loans. Anil Ambani’s money will be distributed to the poorest of the nation,” he said.

The Congress chief promised that the party would deposit Rs. 3.6 lakh in the bank accounts of poor women in five years if the party comes to power.

Speaking in similar vein in Chitradurga, Mr. Gandhi said that Mr. Modi was the chowkidar of just a few capitalists in the country.

He alleged that in the last five years, the chowkidar’s government had waived over Rs. 3.5 lakh crore-worth loans of top businessmen, instead of taking action against big defaulters and helping poor farmers in distress.

Nirav, Lalit, Narendra… Why do all thieves have Modi surname, asks Rahul